Real men like a curry, and no less than here at Casa Rosada. I cook a wide variety of curries, both for guests and in their absence, ourselves. When it comes to ourselves much depends on leftovers. A Sunday roast or meat dish becomes a Monday supper.I draw from three main influences Goan, Indian and Thai, but for the most part my curries are personalized fusions of this, that and the other.Lets face it, we all like a bit of the other. Curry's popularity in recent decades has spread outward from the Indian subcontinent to figure prominently in international cuisine. Consequently, each culture has adopted spices in its indigenous cooking to suit its own unique tastes and cultural sensibilities. Curry can therefore be called a pan-asian or global  phenomenon, with immense popularity in Thai, British, and Japanese cuisines.
Casa Rosada grows its own piri piri peppers. I use these when they are fresh from the bushes but also dry them and use them where a recipe calls for dried chilli and I also make my own blend of curry powder of which Piri piri peppers are a key component. Piri-piri is the Swahili word for the incendiary red peppers of Africa — primarily those of Angola and Mozambique, former Portuguese colonies. Because of the seafaring nature of the Portuguese, it didn't take long for these bite-size pods of fire to make their way to Lisbon aboard spice ships returning from the East...... And the ship sailed on for Portugal to leave its mark on foreign shores.
The Portuguese introduced a new spice to Thai cooking. It was readily absorbed into their cuisine, to such a degree that Thai food today is inconcievable without the chilli The chilli arrived in Thailand some time after 1511, the year the first Portuguese envoy came to Siam. 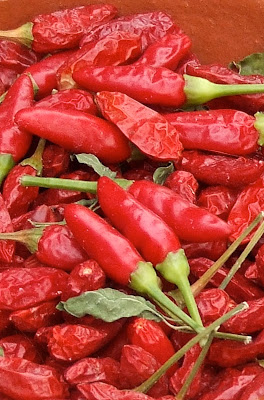 
Blitz all the above in a food processor or coffee grinder,store in a glass jar or sealed plastic bag within an airtight container. The powder will keep for a couple of months.


To prepare a typical Curry
Follow the normal process for preparing a curry,
frying onions ginger and garlic. After that adapt the curry to your own personal taste.
Chicken or any other meat, fish prawns or vegetables.
Curry powder, or individual spices,curry leaves, Lemon grass,kaffir lime leaves, cardamom, fish sauce, soya sauce, the final choice of flavours is yours. Have fun and make your own fusion curry.
Email Post
Labels: expat cravings