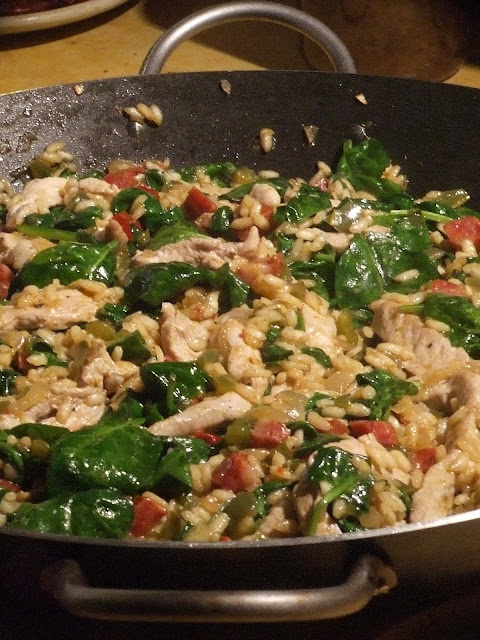 My all new exercise programme is not happening.Auld anxiety, no can do - I´m not kidding you, the promises I make to myself. This time I´m really going to make a plan. This time I´m really going to stick to it. This time there will be a commitment to a new and improved me. and I will not fail.... and I can´t even get started. My excuse- the weather´s been lousy, wet and cold and damp. I have at least pumped some air into the bicycle´s tyres but have I got on it, have I heck. Meanwhile, at least, I  have become very diet conscious, snacking has all but gone. Lesser amounts of nourishment more often and a lot of running up and down the stairs and intentionally leaving things upstairs so I have to make an extra trip. A gentle introduction into cardio -vascular burn I say- NOT.I´ve been away and now returned to improving weather so no more excuses. My second procrastination is even further behind. For four years I have had a Paella pan but never christened it. Last night I decided to take the plunge. I found a paella recipe in its simplest form, all meat and no fish, with some spinach for the conscience. It is a fabulous Moro recipe.The result is an epiphany. A full frontal flash of paella deliciousness.  One of those all time make it again sam recipes.
Paella de cerdo con Chouriço y espinaca
Rice with pork Chouriço and spinach
serves 6 as a starter, 4 as a main course


In a 30-40cm paella pan or frying pan, heat the olive oil over a high heat, then stir-fry the pork for a few seconds so it is still a little undercooked. season with salt and pepper.remove from the pan with a slotted spoon and put to one side. Turn down the heat to a low to medium temperature and fry the chouriço for a minute. Add the onion and green pepper and cook for 20 minutes, stirring occasionally. Add the garlic and cook for a further 5-10 minutes. At this point the mixture ( recheado) should have caramelised and taste sweet. stir the rice into the pan to coat in the flavoursome mixture for a minute.
( up to this point everything can be cooked in advance. The next stage requires about 20 minutes more cooking time).
Now season with salt and a little pepper, for this is the time to season the rice perfectly. add your paprika and Nõras peppers, drained of their water, followed by the hot stock, and simmer for 15 minutes or until there is just a thin layer of liquid around the rice.
Meanwhile in a large saucepan or wok, briefly wilt the spinach with a little salt, either by braising or steaming, and put to one side with the pork fillet.Evenly scatter the pork over the rice followed by the spinach. With the back of a wooden spoon gently push the pork and spinach partially into the oily liquid that remains at the bottom of the pan. Cover the paella tightly with foil and let it sit for 3-5 minutes.