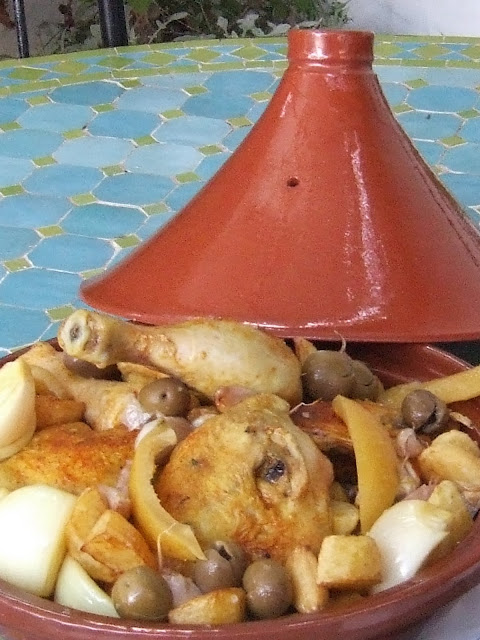 Estou fora de si com exitaçao!!!! - I am beside myself, in a state of great emotional excitement.After months of searching I have finally managed to acquire my first tagine, Morocco´s Iconic conically shaped cooking pot. Hopefully this will be the start of a collection of  different sizes and modes of decoration. To put it to its first test I  opted for an Ottolenghi recipe, not specifically written with a tagine in mind, I know, but I like to do the sort of cooking that gets on with itself slowly, so I can potter about the house.Tagine cooking is slow cooking at its best. Last week in his Guardian column Ottolenghi gave us this relatively simple Sephardic dish* which he told us "yields many layers of comforting flavours".As usual I couldn´t help but meddle a little with Yotam´s recipe, but what the heck, wouldn´t life be boring if we just replicated each others work.You have to, you do don´t you,you do:
Yotam Ottolenghi´s Chicken Soffrito
with O Cozinheiro´s preserved lemons and green olives

If you have a pan that's wide enough to hold the whole chicken flat, butterfly the bird by cutting through the centre of the breast until it opens up (or ask a butcher to do it for you). Serves four.

1 tbsp sunflower oil
1 small free-range chicken (about 1.5kg), butterflied or quartered
1 tsp sweet paprika
¼ tsp ground turmeric
¼ tsp sugar
Salt and black pepper
2½ tbsp lemon juice
1 large onion, peeled and quartered
Sunflower oil, for frying
25 garlic cloves, unpeeled
750g charlotte potatoes, peeled, washed and cut into 2cm dice
1 preserved lemon cut into strips
100g large green olives, pitted
Pour the oil into a large, shallow pan or casserole and place on a high heat. Lay the chicken flat in the pan, skin-side down, and sear for four to five minutes, until golden-brown. Season all over with the paprika, turmeric, sugar, a third of a teaspoon of salt, some pepper and a tablespoon and a half of lemon juice.
Turn over the chicken, add the onion and cover the pot with a lid. Reduce the heat to low and leave for 30 minutes, occasionally checking the amount of juice at the bottom of the pan: add a little water, if needed, so there's always around 5mm.
After the chicken has been cooking for 30 minutes, pour sunflower oil into a medium saucepan so that it comes 3cm up the sides. Bring up to medium-high heat and fry the garlic and potatoes in batches for about six minutes, until they take on some colour. Use a slotted spoon to transfer them to a paper towel. Sprinkle with salt, and repeat with the remaining potatoes and garlic.Meanwhile scrape the pulp out of the lemon and discard. Cut the skin into strips, rinse thoroughly drain and reserve.
After the chicken has been cooking for an hour, lift the bird from the pan and stir the strips of preserved lemon,green olives, potatoes and garlic into the cooking juices. Put the chicken on top of the potatoes and cook for another 30 minutes, by which time the meat should be falling off the bone. When serving, drizzle with a little fresh lemon juice.

...and the verdict: our guests loved it especially the preserved lemon twist.

*The descendants of Jews who left Spain or Portugal after the 1492 expusion are referred to as Sephardim. The word “Sephardim” comes from the Hebrew word for Spain, Sepharad, that is stated in the Bible.
It is believed that Jews had lived in Spain since the era of King Solomon (c.965-930 B.C.E.)(Before the Common Era) Alternative term for "B.C." (Before Christ) Little information can be found on these Jews until the beginning of the first century. We do know that in 305 C.E,(Common era)Term often preferred by Jews and Muslims to refer to the period after the year 0, since “A.D.” (Latin. " anno domini" or “year of the Lord”) refers to Jesus. the Council of Toledo passed an edict forbidding Jews from blessing the crops of non-Jews and prohibiting Jews and non-Jews from eating together.
Email Post