Eighteen, I´d never been kissed by a boy( well as far as I know), never drunk wine, not even Blue Nun. Never eaten an avocado or seen an aubergine. Never been on an aeroplane, life was very different in those days.
It was all Dusty and Dylan and Landlubber loon pants otherwise it was curtain fabric inset in triangles sewn painstakingly by one´s mother into the bottom seam of one´s jeans to make flares.  The alternative was bootboy subculture, bovver boots and braces.Things were soon to change when I became a student.
Those student days introduced Blue Nun along with Black Tower and other cheap German imbibements as my blue heaven and were all the rage on tight grants. I was barely ashamed to be quaffing nuns piss by the bucket. There was little to be embarassed about, Rod Stewart endorsed it and Elvis Presley sang about it, and did you know.... On the Beatles’ infamous White Album, the track ‘Long, Long, Long’ is overlaid with the sound effect of a bottle of Blue Nun spinning on the top of George Harrison’s amp!
It was de rigeur to have familiarity with a fluted blue glass bottle.
Oh yes we knew how to entertain. In my early student days Blue Nun and I were joined at the hip, not biblically speaking of course. Had we no shame? We imbibed the nun warm, ignoring guidelines for chilled or room temperature.
German wines, once the Frauleins of the wine world,  used  to sit proudly alongside their quality French counterparts. But then came Liebfraumilch and the popularity of this young upstart of variable quality, and its subsequent fall from grace, tarnished all but the odd German Riesling along with it.Blue Nun launched in Germany in 1923. After World War II, the brand became incredibly popular in the UK and the US, selling for the same price as a second growth Bordeaux.By the ‘90s however, easy-drinking, semi-sweet German wines began to fall out of favour, and the brand came to be seen as tacky and dated.
Now in 2011 Blue is back in wine spraak  but instead of Blue Nun its Blue Window.(Janela Azul ) A smart quaffable vinho for a corresponding price to what we used to pay for the eponymous lady of the cloth. The nun in question has had a youthful makeover, and has retreated discreetly into the emblem on the label. 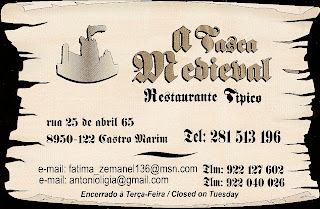 Is  Mateus, the iconic rosé, next  up for a bit of rejuvenation? The mind boggles 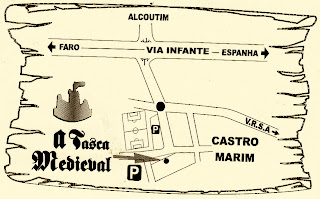 But for the moment Alentejan wins my palate.Try a glass or bottle with some excellent traditional Portuguese cuisine at a Tasca medieval in Castro Marim., where Fatima and Antonio will welcome you and
ensure you receive excellent service.