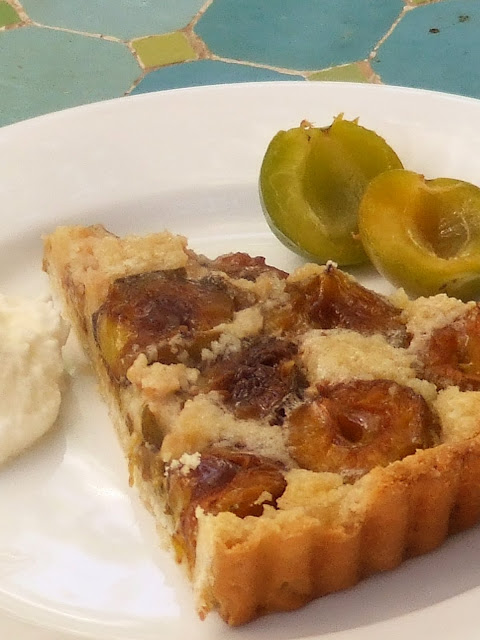 .... The pudding was called Claudia.Named not after Schiffer, Cardinale or even Winkleman,two great media queens and a princess of the silver screen.My queen of puddings was named after Rainha Claudia or La Reine Claude, wife of François 1 of France.
Was Claudia small, round and green? - probably not,but they had to name something after her.Eh,voila!!- the Greengage.We have a Spanish couple from Sevilha staying in the house, and they had ordered dinner. I prepared the dinner menu, but the thespian, who enjoys pushing me to my limits,encouraged me to stretch my skills and venture out of my culinary comfort zone.I dutifully agreed and for the pudding I donned my plumed hat as ambassador to the court of tarts.Tarte Rainha Claudia com massa Amendoa, a greengage and almond frangipane, the perfect August pudding, when those beautiful little green,( may I call them Plums?) gages are in season.Not too far from my comfort zone, having made this little number before, I served it up with honey whipped cream.Lola, having been suffering with a bad back for the entire day,announced that having partaken of my pudding "her hormones were back in equilibrium again" I was so pleased I  decided to introduce her name into the pudding.
Tarte Lola com Rainha Claudia massa amendoa

One quantity of sweet pastry, shop or home made
( approx. 500g )

FOR THE FRANGIPANE
250g whole blanched almonds250g unsalted butter250g caster sugar4 whole eggsas many greengages as it takes
to fill the tart shell in one layer.

Prepare the frangipane the day before. Grind the almonds until fine.
Put the butter and sugar in a bowl and beat until creamy.
Crack the eggs into a bowl and whisk thoroughly.
Slowly add the eggs to the butter and sugar.
add the ground almonds and mix in well.
Refrigerate overnight. Frangipane cooks better when cold.
Line a 12in loose bottomed pie dish with the pastry and put in the fridge for 1 hour.
Pre-heat oven 180c /350f 7 gas mark 4.
Blind bake 15 minutes and allow to cool.
Fill the tart shell with frangipane.
Halve and de-stone the fruit then lay them over the frangipane in one layer cut side up.
Dust with icing sugar and put in the oven for 45 minutes.
Let tart sit for at least half an hour before removing and serving.
Serve with lashings of creme fraiche!!-Hurrah.

What would I have done if "It had happened one night" that "Lily" Colbert had been in the house? I would have had to make a smaller pudding and call it Rainha Claudette.
Email Post