The cakes that never came 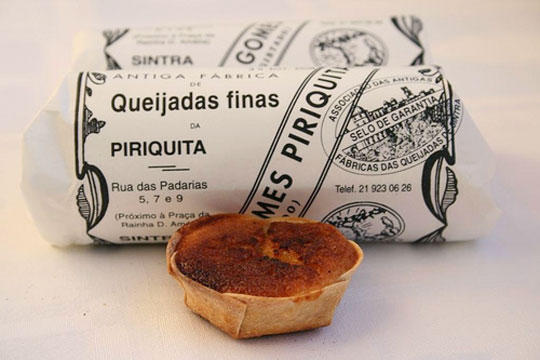 The Maias  regarded as the most important work of the late 19th-century Portuguese writer Jose Maria Eça de Queirós is full of culinary leitmotifs.Early in the book Two friends make an excursion from Lisbon to Sintra;Carlos in the belief that he will find the woman that he has seen twice but never met and with whom he has fallen passionately in love and Cruges his friend, who has been charged by his mother not to return without bringing back a unique speciality of Sintra- Queijadas.
....`Don´t forget the cheese pastries´

These delicacies are tartlets filled with a mixture of egg, sugar, cinnamon and Requeijao ( a fresh curd cheese similar to Ricotta) - Two men on a mission.

`And I´ve still got to buy those cheese pastries`, muttered Cruges
Exactly cried Carlos.There are still the cheese pastries to buy;there´s no time to lose! We´d better go!´

They return at the end of the day,one having failed to encounter his true love and the other having forgotten to buy the cakes.
Both Woman and cakes are delectable, sought after consumables, and as we learn later, both can be bought.These cakes, once associated with the woman being pursued, recur later in the novel either as a gift that has been forgotten or as a gift that comes to nothing.When another best friend first meets the aforementioned woman at Carlos´house, he coincidentally brings with him a packet of queijadas.
...`the brown paper parcel, only loosely tied together,came undone,and afresh supply of special Sintra cheese pastries tumbled out onto the floral rug and promptly crumbled into nothing....
The seemingly unique relationship between woman and suitor was as fragile as the pastries and was soon to crumble into nothing as well.

FILLING
12oz(350g) fresh Requeijao ( substitute ricotta)
2oz(60g) grated hard cheese,Cheddar type
7oz(200g) caster sugar
5tablespoons flour
3egg yolks plus 1 whole egg
!/2 teaspoon cinnamon
The cases in which the cheese filling is cooked are tin and crunchy,rather like very thin water biscuits. The dough is generally prepared well in advance, preferably the previous day. Put the flour in a bowl, make a well in the centre, add the softened butter and a little salt.Mix with the tips of the fingers and add tepid water very gradually while kneading thoroughly. The dough must be elastic and smooth but rather on the dry side, and should not stick to the bowl.Cover with a dry cloth then with a damp one. set aside to rest until the following day, or at least for a few hours.
Meanwhile prepare the filling.Sieve the fresh cheese, and mix well with the grated cheese, until a smooth paste is obtained.Add the sugar an then all the other ingredients, little by little, beating between additions.
roll out the dough really fine( the thickness of 3 sheets of paper, put together) on a floured board.Cut out small rounds,3inches(7.5cm in diameter, and line buttered patty tins with them, cutting 4 snippets to adjust the dough into the tins. Fill with the cheese mixture and bake in ahot oven210ºc /425ºF /Gas 79 for about 15 minutes or until brown.
When cold, join the tartlets in pairs, placing a small piece of greaseproof paper between them. Keep in tins to prevent drying.
Makes 24 to 30 queijadas.
Email Post