Chestnuts roasting on an open fire.... 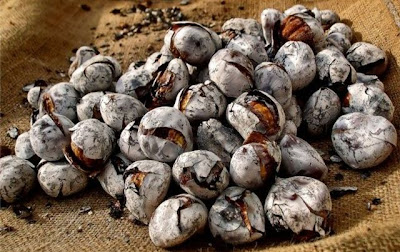 É dia de São Martinho;
comem-se castanhas, prova-se o vinho.
It is St. Martin's Day,
we'll eat chestnuts, we'll taste the wine.
A typical Portuguese saying related to Saint Martin's Day
In Portugal,today the 11th November we celebrated St. Martin's Day.It is commonly associated with the celebration of the maturation of the year's wine, being traditionally the first day when the new wine can be tasted. It is celebrated, traditionally around a bonfire, eating the magusto, chestnuts  roasted under the embers of the bonfire (sometimes dry figs and walnuts), and drinking a local light alcoholic beverage called água-pé (literally "foot water", made by adding water to the pomace  left after the juice is pressed out of the grapes for wine - traditionally by stomping on them in vats with bare feet, and letting it ferment for several days), or the stronger jeropiga (a sweet liquor obtained in a very similar fashion, with aguardente  added to the water). Água-pé, though no longer available for sale in supermarkets and similar outlets (it is officially banned for sale in Portugal), is still generally available in small local shops from domestic production.
Email Post