Casa Rosada "checked in" to Lisbon for three days.We arrived with small overnight bags, capsule wardrobe enclosed therein.Our mission - a bit of relaxez -vous and, as always, find good food and "happy" meals at value prices.Others had come from other parts of Portugal prepared to do battle, armed with placards and banners.Lisbon on Thursday played host to the Greve Geral.Portugal´s leader Pedro Passos Coelho had told his nation to brace for further austerity.The nation´s workforce was not happy.15,000 Portuguese unions were supposed to have been represented in a mass demonstration on the streets of Lisbon.For most workers, not being able to get to work gave an excuse for a day off at home. For those who knew better, it was all hands on deck to serve us estrangeiros with coffees, cakes  and sandwiches, Pastelaria-Padaria São Roque did just that.
Located at the top of the Bairro Alto in Principe Real, this turn of the century "cathedral of bread" as proclaimed by azulejos ( decorative tiles) behind the counter, is essentially one of Lisbon's excellent bakeries, although ample seating is provided for customers who prefer to stay longer.The decoration alone makes this worth a sit down stop.Marble pillars reach up to a magnificent domed ceiling. Tiles intricately painted with scenes from nature flood the room with colour. Staff understand little English and territorial locals are somewhat put out by curious tourists.To discover this is to discover a real slice of local life.
Having been slightly disappointed (main criticism tables too cramped)  by the very authentic Portuguese fare of a neighbourhood Bairro Alto restaurant, Alta Bota, we opted on our second night for something more spacious. A slice of Little Italy New York dished up with Portuguese precision by a charming and attentive brigade of waiting staff.
Not apparently known to taxi drivers, this up-market, but very reasonably priced Italian restaurant serves traditional Italian piatti and pasta dishes with a Portuguese essence by a Napolitan chef who formerly owned a restaurant in New York, but moved to Lisbon a few years ago.It is one of the most authentic Italian restaurants in the city - the mozzarella apparently is even shipped directly from Italy. (only criticism: chef Guerreiris predominant love of spinach).After dinner we headed back down the Avenida to call in for a nightcap at  Enoteca Chaffariz do vinho 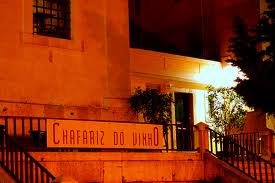 This "watering hole" is located just up the street from Praça da Alegria and right down the steps from Principe Real. What makes Enoteca Chafariz do Vinho attractive is its unique location within an 18th century stone reservoir. This Mãe de Agua (Mother of Water), which also happens to be the name of the street it’s situated in, connects apparently with the rest of a 36 mile aqueduct used during water shortages to bring clean water into the city up until the 20th century. The reservoir was refurbished and converted into the enoteca it has become today. Beginning at the very bottom of the cistern and traveling up a towering 3 stories, tables fill every nook and cranny of this medieval, yet romantic,quirky space. At night, the reservoir fills up with visitors keen to have a tipple. With an amazingly comprehensive wine list including 14 wines by the glass, and a very reasonably priced tasting menu you´ll love this if you can find it.Impossible to park but the kitchen stays open till 1a.m.
Back to reality on the sunny Iberian peninsula there has been a feeling that as bad as things are, they're not yet as awful as they will become.Earlier in November the Algarve was victim to some heavy rains and  a tornado that literally took with it the roof of the check in hall of Faro airport. Maybe the "heavenly powers" (Sarkhozy, Merkel etc) were trying to tell us that something is rotten in the state of Southern Europe and it is  is in the grip of the worst economic crisis since the second world war. Is the fish in Portugal rotting from the head down—all is not well at the top of the political hierarchy for sure. If Shakespeare was alive today he might have written something like this....
Cavaco Silva:
She waxes desperate with imagination. "She is well and truly frit".
Coelho:
Let's follow. 'Tis not fit thus to obey her.
The leader of the unemotional volk "is having an uncharacteristic fit of the vapours."
Cavaco Silva:
Have after. To what issue will this come?
Coelho:
"There are limits to cutting: you can't just cut blindly,"
Something is rotten in the state of Merkel.
Cavaco Silva:
Heaven will direct it
Ironically however Casa Rosada was a benefiary of the current situation, giving the Algarve its busiest summer on record.The reason - the holidaymaking population of the Iberian peninsula stayed home and French holidaymakers alike took to their cars instead of planes. There was no room at the inn for anyone, restaurant seats were like gold dust, some units in large shopping malls may have looked like ghost trains but others were open and doing business.

Life must continue. Recession,what recession.There maybe no Christmas street lights but Portugal has survived recessions before and those who are old enough to remember it are the stalwart ones who will survive methinks.It is a sanguine view a "saudade" perhaps. A longing for the past that is so far in the future it may never happen.Lets hope Alls well will End well.