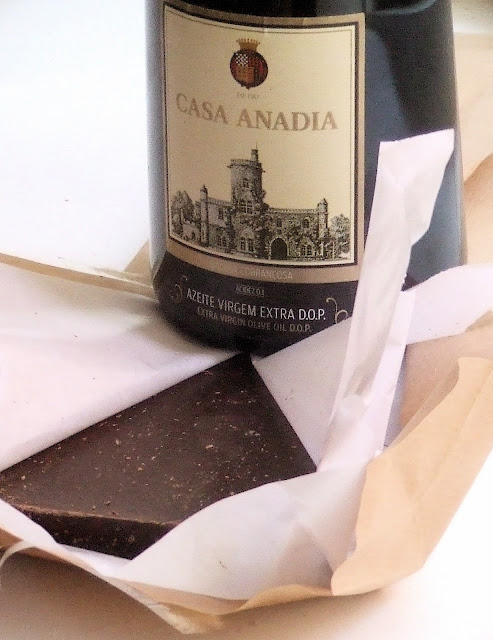 The first first pressing was in the summer of 2009.The first lot was a limited edition of only 5,000 bottles.A sophisticated and discerning wider public have been awaiting an olive oil that has the calibre of Casa Anadia. Since a month ago the Algarve now has a distributor in Faro and this olive oil can be purchased in gourmet outlets such as Ex Libris Gourmet in Tavira.
The terms used to describe it are worthy of a wine maker.....

" an olive oil of superior quality,fruity,soft,sweet and spicy, leaving a final taste of green almond and with a scent of fresh artichokes and apples to remember it by".

The most interesting particularity of Azeite Casa Anadia, however is in the fact that it is made from a single variety of olives(Arbequina)transformed in the hours immediately following the harvest.Truly extra virgin, DOP Ribatejo, cold pressed with a maximum acidity of 0.2 per cent.What more could a chef ask for? The low acidity and fruity finish makes it an ideal choice for combining with chocolate.You would think that the flavour pairing of olive oil with chocolate is the creation of some chef dabbling in molecular gastronomy, "elementary my dear Blumenthal," No you are so wrong,the award goes to the Catalans in Spain.After the second world war when luxury ingredients such as chocolate were rationed, Catalans would melt a piece of chocolate,spread it on bread and add a few drops of olive oil and finish off with some salt on top.
Pan con chocolate (Chocolate toast) is actually a popular after school snack in Spain. Ferran Adria used to love eating it as a boy and he actually served a gussied-up version of this, called pan con aceite y chocolate, as a sort-of-dessert in El Bulli. Or at least he used to!!!
There is a scientific explanation of why chocolate pairs well with olive oil.Chocolate is made up of cocoa solids, cocoa butter,vanilla and sugar.Cocoa butter is high in fat and coats the tongue.The extra virgin olive oil decreases the fat thanks to the polyphenols it contains, a class of antioxidants found in a variety of foods, and these polyphenols dry the mouth and allow the cocoa flavours to come through.The flavours of chocolate therefore pair well with those of oil.Some taste fruity,others taste nutty,some are more bitter and some are milder.Olive oil is the same.Different varieties are more or less bitter,and taste more or less peppery,fruity or floral.These flavours compliment the fruity floral notes in the chocolate, and what better candidate to do the job than Casa Anadia.
Produced in the Quinta do Bom Successo, Alfarrarede (Abrantes)the estate has a tradition of olive oil production going back some 500 years.Quinta do Bom Succeso (400 hectares in area, 90 of them encompassing olive groves)and is still privately owned.The Bom Sucesso estate files contain documents that confirm the strong relationship this House has with olive tree farming. A photograph dated 1890, taken by the Marquise of Faial, daughter of the first Count of Alferrarede, clearly shows the Manor's olive press. Casa Anadia belongs to an ancient nobility and nowadays represents important Portuguese titles and connections.It is through the 4th Count that the Anadia family became connected to the important Paes do Amaral family.In the second half of the 19th century, the title passed on to José de Sá Pereira de Menezes Paes do Amaral, second son of the 4th Count of Anadia and brother of the 5th Count of Anadia. Today the estate is still in the Anadia family and the current title has passed to businessman Miguel Paes do Amaral.After a career in the media and  book publishing, the former president of Media capital floats his hopes in olive oil, a trend that is fortunately on the up.
Casa Anadia olive oil is  the continuation of an ancient link to olive oil production. This is immensely relevant today and for the future, as in a fast-moving world, roots are an increasingly important distinguishing factor. Tradition leads to know-how, building the personality of brands and the trust of consumers, clearly adding value to both.