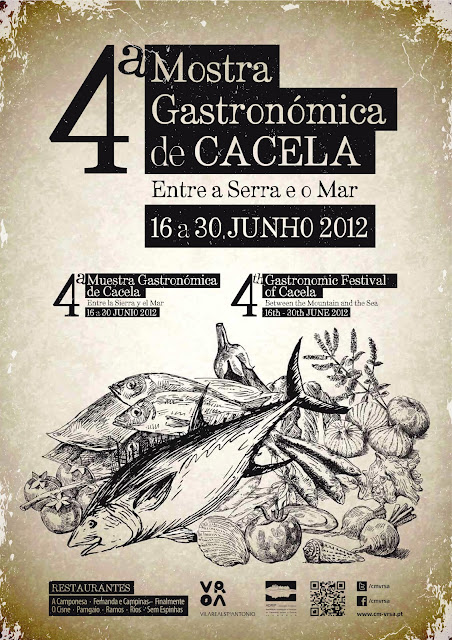 Only a month ago I wrote a blog post about  Algarve Restaurateurs and managers getting their heads round learning how to promote and sell the latent culinary product they are sitting on.In terms of gastronomy the East Algarve has a wealth of traditional recipes and dishes that have not been cooked for years.I was encouraging a mission to rescue these wonderful long forgotten gems and flag them up as such on menus.Over the next two weeks in the Cacela region this is exactly what will be happening.
The fourth Festival "Entre a serra o mar" opened on Saturday evening and until 30th June selected local restaurants will be offering menus featuring these very same regional specialities.Restaurant doors will be open to promote the gastronomic traditions of the area.Local products and traditional recipes wil feature strongly, and at the same time they will be paving the way for innovation.During the next two weeks  one will be able to taste dishes as diverse as espinheta atum(braised tuna) with black-eyed beans, seafood soufflé, Ferreira (gilt head bream) with baked sweet potato  and mountain salad, Açorda ( bread soup) with Ria Formosa clams and shrimp, Razor clam rice with shrimp,  and wild mountain boar, among many other delicacies.For dessert, the menus are highlighting local specialties such as almond and orange pumpkin pudding, figs and carob cheesecake, lemon and mint mousse and rice pudding with carob.Many of the participating restaurants are in areas which have a notable importance in terms of landscape and cultural value. Restaurants that have accepted the challenge are 'Sem espinhas', 'Finalmente', 'Rios e Ramos' in Manta Rota, "O Camponesa" and "O Cisne", in Vila Nova de Cacela," "O Pangaio"  on the EN 125 in Cevadeiras and the "Casa de Pasto Fernanda e Campinas" in Corte António Martins. 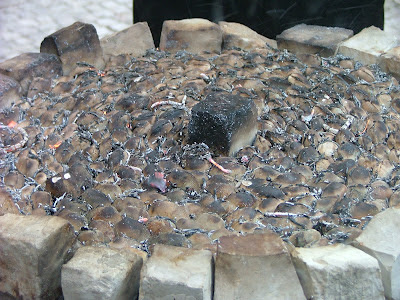 To raise awareness of these dishes,the restaurants and local traditions,the festival opened with an on the spot live demonstration of  "Town of Clams".In addition to sampling menus and wine tasting, this old  tradition from Olhão, consisting of a circle of clams arranged in tight concentric circles around a stone and then covered with pine needles was set fire to until the clams were cooked and opened.
The people of Cacela and their restauranteurs have a great pride in their culinary heritage - the wealth of sustainable fishing on this stretch of Algarvian coast and the fruits of their labours in the surrounding fields and orchards; vegetables, citrus fruits, figs, almonds and carob.A recognizable feature of the next two weeks promoton will be the traditions linked to free range mountain grazing, the production of honey, hunting and the widespread use of herbs such as Poejo (pennyroyal) for flavouring these dishes.
If you are looking for an Algarve meal with adifference between now and the end of the month I implore you to tryout one or more of these special promotional menus.it is only by responding to what is on offer and applauding it that resataurant food in the Algarve will become more exciting.
For more detailed pictures of the event
Email Post