Secreto Ibérico -The secret of the iberian pig 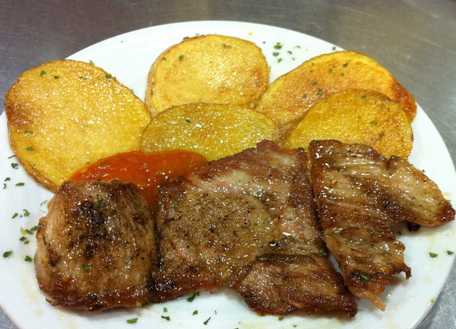 Secret pork....curious name.One of Portugal´s best kept secrets it seems.There is no secrecy about how to cook it. It is a highly marbled cut of pork, but not too fatty; the veins of fat are small and well incorporated into the meat. You simply season it with a good pinch of salt, grill it quickly in its own fat over very high heat, and the surface gets crispy while the interior fat melts and leaves the meat moist and bursting with flavour. It also retains the texture of a nice steak.Like the meat from Wagyu cattle that produce the famous Kobe beef known worldwide for its marbling characteristics and naturally enhanced, flavour, tenderness, and juiciness,the Secreto has to be Portugal´s equivalent, taking pork to a higher level.So what is the secret.The meat is in a layer that is hidden among other layers of belly fat or bacon...that is the clue to its name.

This mysterious cut of pork I have only encountered in Portugal and Spain.Moreover, what I have specifically tried was Secreto Ibérico from the famous  acorn fed black pigs.The mystery doesn´t end there, there still seems to be much confusion to the exact location of the pork secreto cut.Its like being blindfolded and trying to pin the tail on the donkey, or playing Cluedo with a poor knowledge of porcine anatomy.Hokey cokey pig in a Pokey I'm still not sure exactly where the cut comes from, I've heard many an explanation:"skirt steak","hidden underneath the belly fat,or is it the oxter? The Scotsman on Wikipedia tells us as such "The oxter is the pairt o the human body richt unner the jient where the airm jiens the shouder",in a word "under the shoulder blade next to the ribs."Is it between the shoulder ribs and fatback? Perhaps there are two different cuts both referred to by the same name.I am still none the wiser.I need more clues to reveal the secret. 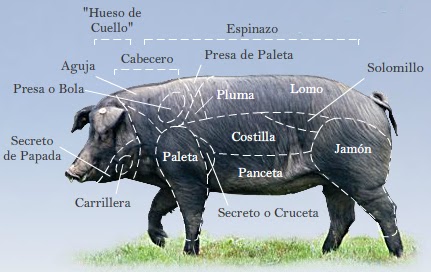 I did find this chart which provides another clue, and I believe that since pork belly does wrap up the side of the hog to cover the ribs, that describing it as under the belly and behind the rib might both be correct.I think perhaps the Portuguese secrete it in their menus in the hope that they wont have to share it with the tourists, giving it an ironic name, laden with sarcasm.Have you discovered the secret of the Portuguese pig?
But it would be good to keep a secret of our own,the best kept Portuguese secret...
Uma delicia... A delight ...I am not good at keeping secrets,not for long anyway.