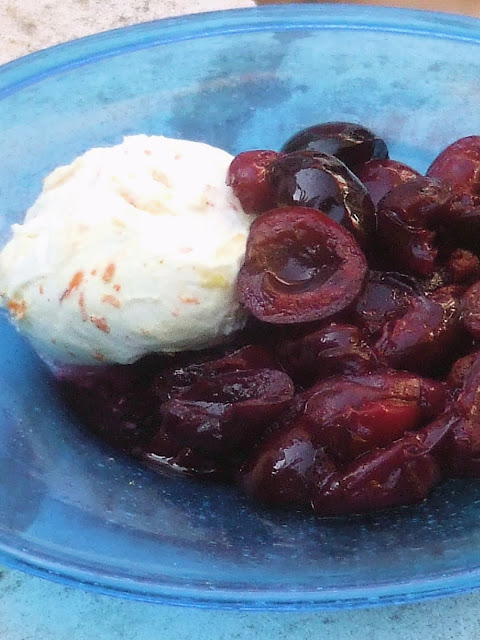 If you are reading this in England you will either be full of jubilation or jubilee- ed out.The parties over and I am no monarchist.I have deliberately turned my back and bah-humbugged any whiff of expat royalist activity.I have decided to post a posthumous recipe from my very own jubilee free penal colony in the Algarve.So lets turn our back on all the nonsense back home. Its June, it´s  Portugal and  they´re here - cherries. They´re juicy, they´re ripe,and they´re irresistible.The power of cherries as a superfood can be obtained by eating them raw but I wanted to see what I could do with a cooked cherry. Can I bake a cherry pie? Yes, but I dont want to use the tinned variety.Every recipe I found for cherry pie used canned cherries.But Hey Ho I found quite by accident an old English recipe for Cherries Jubilee. This is a dessert made with cherries and liqueur (originally Kirsch), which is subsequently flambéed and traditionally served as a sauce over vanilla ice cream.The recipe is attributed to Escoffier, who prepared the dish for one of Queen Victoria´s  Jubilee celebrations, though it is unclear whether it was for the Golden Jubilee of 1887 or the Diamond Jubilee in 1897.This was more what I had in mind, and something in my back head was telling me cherries and mascarpone make a fresh pair for summer.

For the compote, put cherries, wine, sugar and zest into a small pot and bring to a boil. Reduce heat to medium low and simmer until thickened and cherries are very tender, 10 to 15 minutes. Remove from heat and set aside. Meanwhile, for the mascarpone, stir together mascarpone, honey, juice and zest just until combined. Serve compote warm or cold, spooned over dollops of mascarpone.