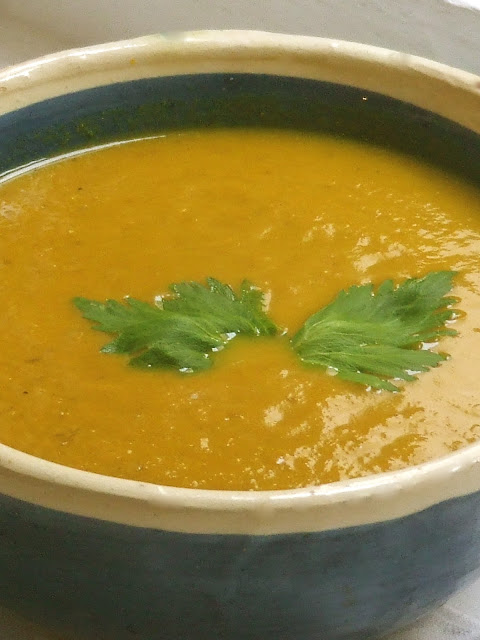 ....or how a ham bone became a comforting soup, and by accident I created a  Portuguese sham chowder.So "two soups? One soup and another soup"
Beedle dee, dee dee dee...
We like it.
Beedle dee, dee dee dee...
This two for one.
and
I do the cooking...
Whenever I am asked the question "What is my favourite dish to cook on chilly rainy days in winter?" the answer is inevitably soup. Whether it's a simple broth with tender Italian tortellini (tortellini in brodo), a remedial Portuguese pick me up (canja with pasta noodles) or a hearty bowl of chowder, a spoon is applied to face, a small blowing gesture for cooling follows, spoon meets lips and the result is a satisfying "mmm." Even the most complex soup can invoke a very basic pleasure, like a warm blanket on a cold day (French onion) or a cooling refreshing summer sensation in August, white gazpacho with grapes (Ajo blanco con uvas).
Did you save your leftover Christmas ham bone?- and if so do you have some split peas or lentils in the cupboard? I can hear you saying "I know whats coming" and feel you might be groaning already - who has the time to make homemade soup? You're right, it's a time-consuming process but most of the time is accounted for by the soup sitting on the stove simmering, not by you actively preparing the ingredients. Its so not a risotto, requiring the standing and constant stirring.
To help ease your work schedule, you can prepare the soup over two days. Day one - put the ham bone on to simmer. It needs to simmer for anywhere from 3 to 4 hours- this long, slow simmering develops the wonderful flavour that forms the basic stock needed for a classic robust soup. Just before hitting the sack, cool the stock, then put it in the refrigerator. (After the pot has cooled slightly,  set it in a sink  of cold water to speed up the cooling process)
Day two, skim the fat from the surface of the stock and discard the ham bone, then put the pot on the stove to start heating the stock while you prepare the remaining ingredients. Once the remaining ingredients have been added to the pot you can relax and have a cup of tea while the soup simmers. A few final touches and dinner is ready.This soup, "London Particular,"was named after the thick blankets of yellow fog or `peasoupers´ that used to engulf London. I have never managed to achieve the yellow hue in my soup.Every time I have made it ( and I only make it once a year so no second chances)it is an unappetising shade of grey.The colour of city fog.So this time I followed a different recipe and embellished that recipe with a smattering of turmeric.I love turmeric, and not only did it bring a more cheerful tone to the soup but it actually enhanced the flavour.

The trick to making the rich, creamy texture typical of this classic soup is to cook the split peas until they dissolve and thicken the stock.

Put the ham bone, clove-studded onion and bay leaves in large heavy pot. Add water. (The ham bone should be completely covered. If necessary, add a little more water.) Place over high heat and bring to a boil; reduce heat, cover and simmer for 4 hours. Remove from stove, uncover and let cool, then cover and refrigerate overnight.
The next day,skim the fat from surface of ham stock; discard fat. Remove clove-studded onion and discard. Remove ham bone; set aside.
Transfer 1 tablespoon (15 mL) cold ham stock to small bowl. Add mustard and stir until dissolved. Add split peas, thyme and mustard mixture to ham stock. Place over high heat and bring to a boil.
Meanwhile, cut ham from bone; discard bone. Cut ham into bite-size pieces (we had about 2 cups/500mL); refrigerate until ready to add to soup.
When stock comes to a boil, add carrots, celery and leek. Return to a boil; reduce heat and simmer, uncovered, for about 75 minutes or until peas dissolve and thicken soup, stirring occasionally then more frequently as soup thickens.
Add ham and cook for 2 minutes or until ham is heated through. (If you prefer a thinner soup, add a little water until reaching desired consistency.) Stir in vinegar.
Remove and discard bay leaves. (Make ahead: Chilled soup can be frozen in airtight container for up to 1 month.)
Garnish each serving with parsley.
Makes 8 servings.

Now for the trick - serve some of the soup for lunch or supper and save the rest  in the freezer for a second souperior meal-a lentil clam chowder.


Chowder-A thick, chunky seafood soup, of which clam chowder is the most well known. The name comes from the French chaudiere, a cauldron in which fishermen made their stews fresh from the sea. New England-style chowder is made with milk or cream, Manhattan-style with tomatoes. Chowder can contain any of several varieties of seafood and vegetables. The term is also used to describe any thick, rich soup containing chunks of food (for instance, clam chowder).

Lentils pre-date the potato as a starchy accompaniment, so you can thicken your soup without using potatoes. I already had some pre-cooked clams with their cooking stock in the freezer.These were clams left over from when I recently cooked Rick Stein´s Clams with Serrano ham and sherry recipe,so packed full of flavour to kick off my lentil Clam chowder.The pea soup (see above) had also been made with ham stock.Lentils and bacon are a match made in heaven. 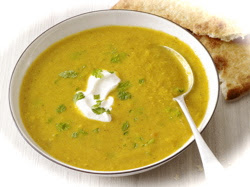 My Sham chowder is a comforting meal that can be made any night of the week. Who can resist clams,in thick bacon flavoured creamy soup, and sweet corn?  Serve this chowder with a nice hunk of crusty garlic bread.