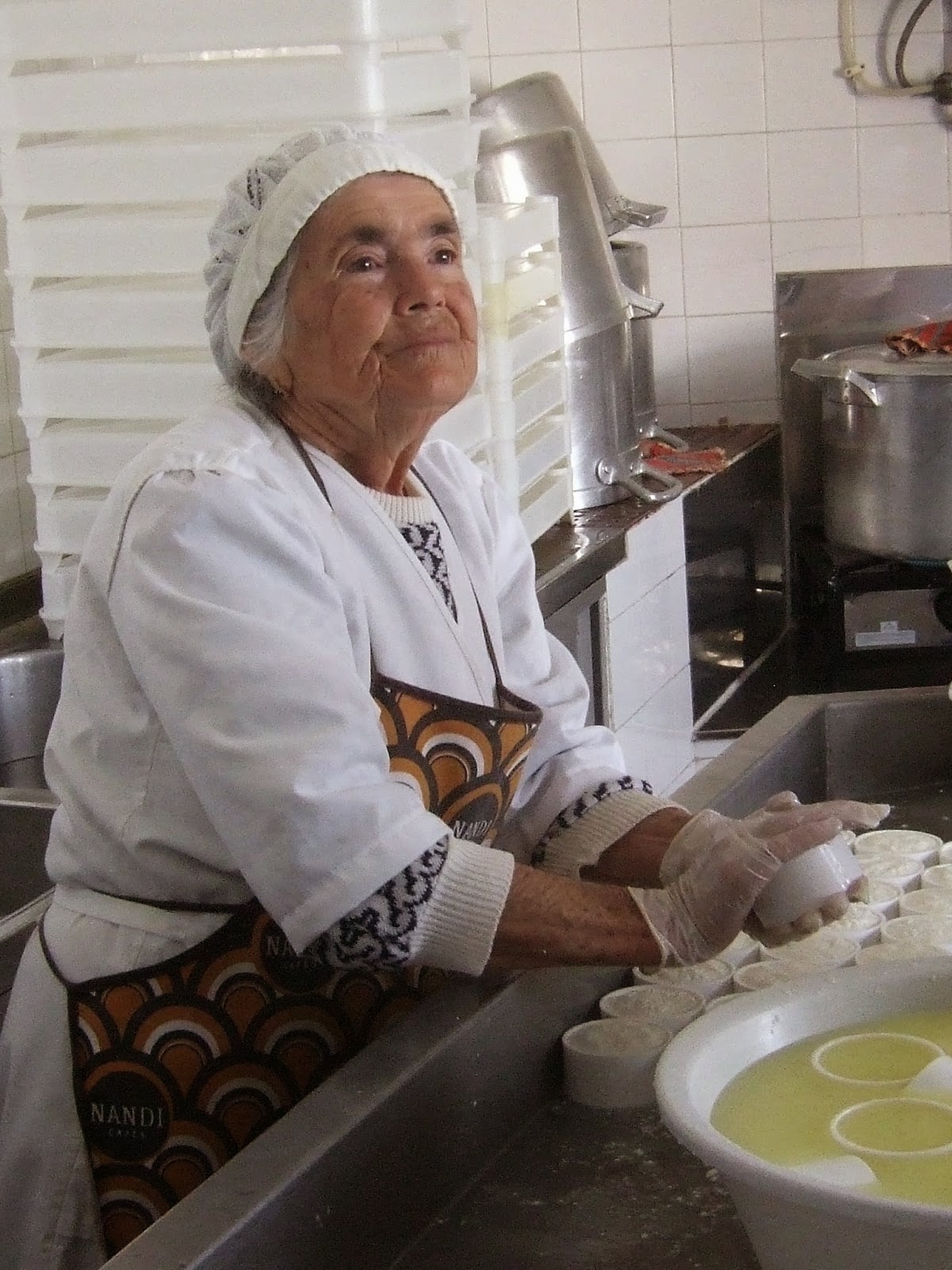 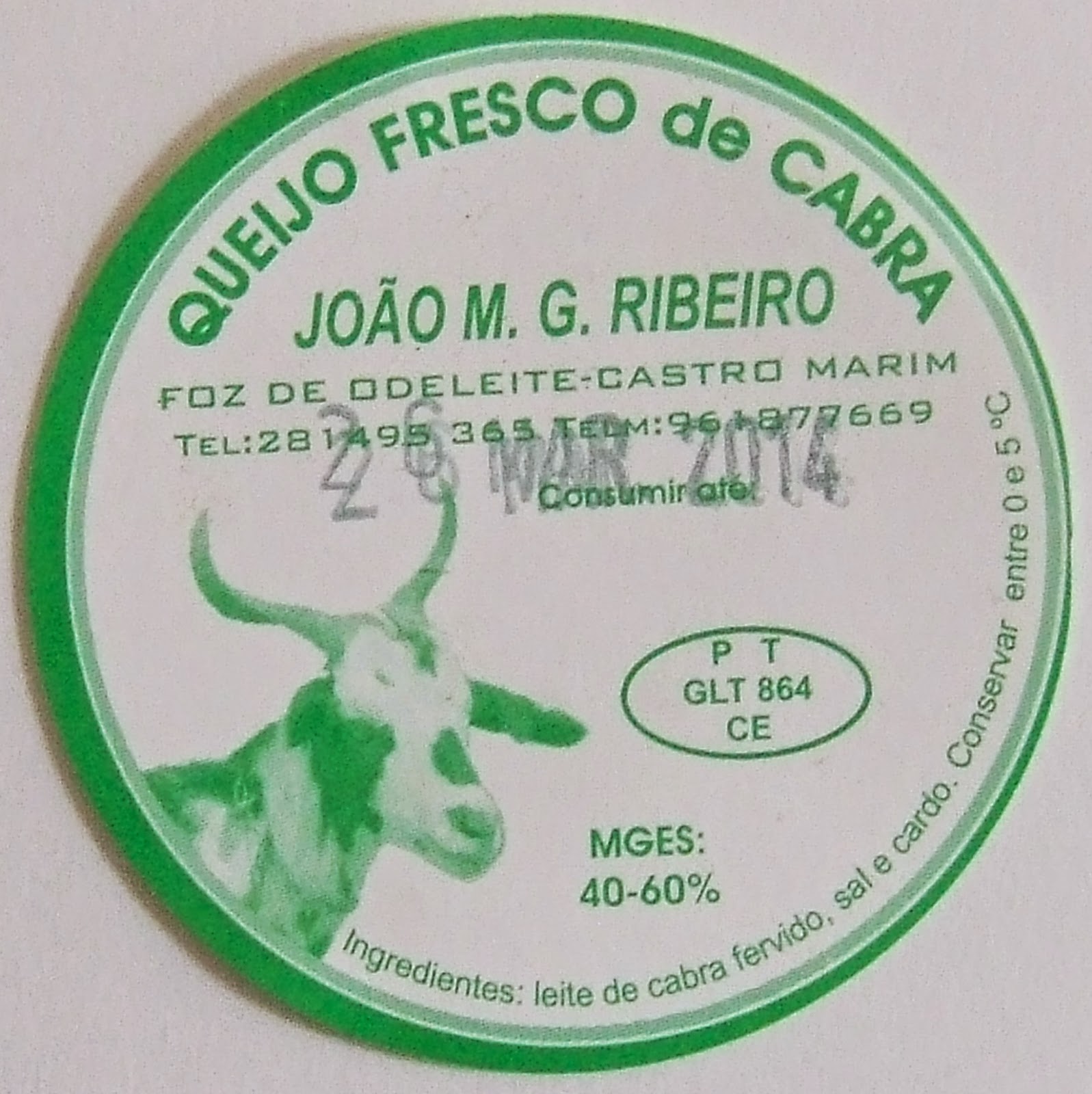 I was recently privileged to participate in a food bloggers weekend.From Friday to Sunday we had the chance to sample some of the modern, innovative,fine dining and molecular gastronomy of the East Algarve and Southern Andalucia.The highlight of the weekend for me however was not the modern Algarvian fine dining - interesting and delicious as it might have been- but discovering some more traditional gastronomic Portuguese treasures to be found on our doorstep.Artesan cheese making and bread baking.There is a common denominator here, artesan Flor de sal.Salt is not just a seasoning “chefs in the know” sprinkle over their food, but an integral part of cheesemaking and we were also able to taste bread baked with and without salt.Flor de sal was the focal point  and we witnessed how chefs use it in their creations.The weekend started on Friday evening when we were guests of Monte Rei Golf and country club and some clever molecular gastronomy presented to us by Jaime Perez and chefs Renato and Dalila Cunha from restaurant Ferrugem in Porto.You should have seen the expression on my face when a white capsule was miraculously transformed into a warm “oshibori” wipe as warm lemon infused water was poured over it.It rose serpent like from my plate,reminiscent of a Chinese cracker trick.I did not know whether to admire it or eat it and only avoided an embarrassing culinary moment when I noticed my fellow diners were cleansing their hands with it. 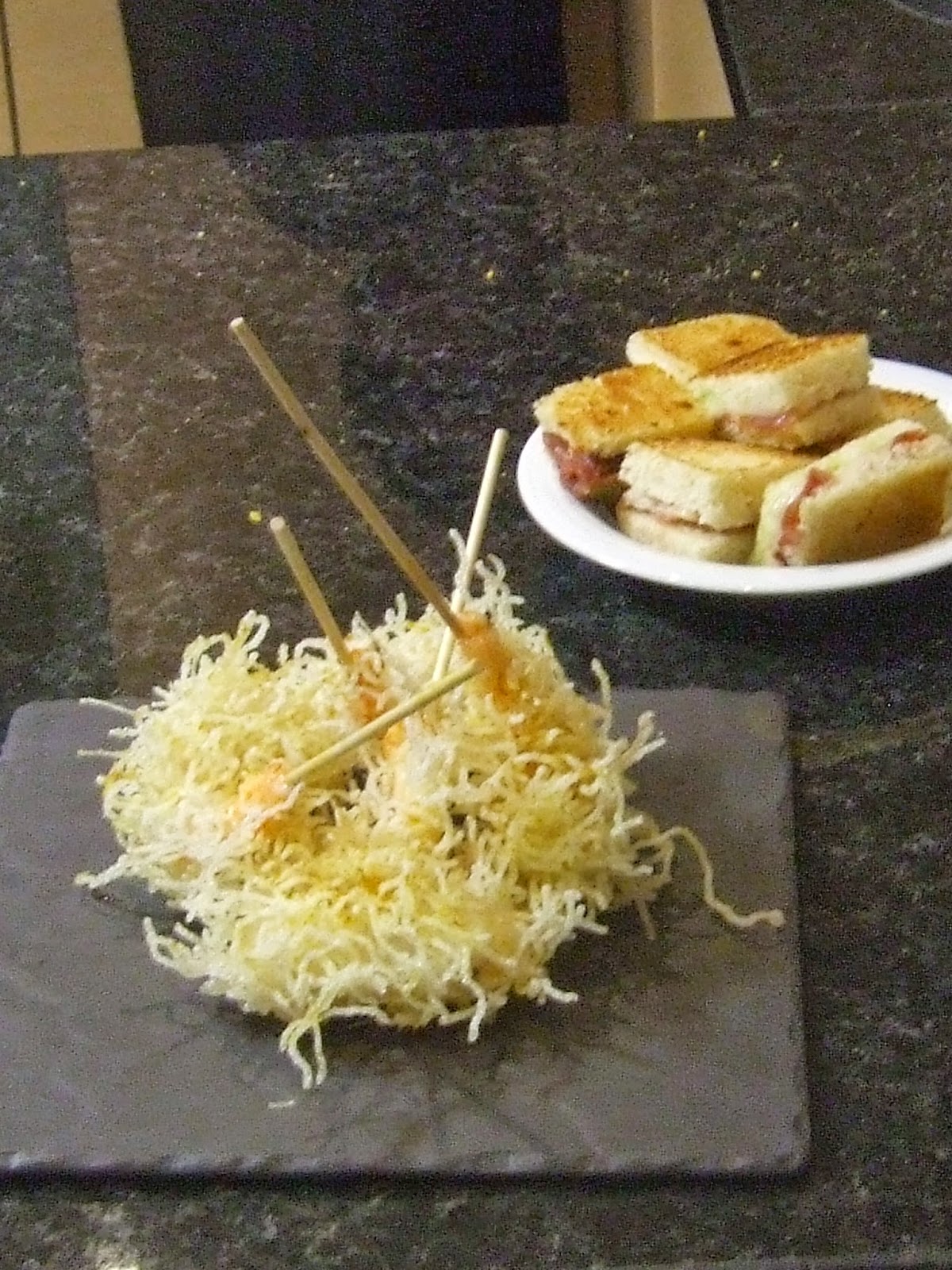 Putting my naivety aside some of the canapés and degustation items were indicative of Perez´ time with superstar chef Ferran Adria at El Buli´.
Next morning it was an early start, to drive north from Castro Marim through some stunning countryside that an uninformed tourist would sadly miss.Arriving in the remote little riverside village of Foz de Odeleite,the sun managed to break through clouds threatening an impending spring shower.A narrow weed strewn street led us to our Nirvana.There was a sweet smell in the air which was already giving us a clue as to where we were heading,an artesan dairy.
The smell intensified as we entered a room,almost surgical in its appearance.Large pans of milk were heating on the stove and a large stainless steel table filled the centre of the room.While 72 year old Dona Isabel Cavaço washed pots, 78 year old Dona Otilia Glory Gonçalo Ribeiro,mother of the current owner was preparing to apply gloves ready for the filling of the moulds with the fresh cheese.What we witnessed was an operation of hospital like proportions with the highest levels of hygiene being observed. 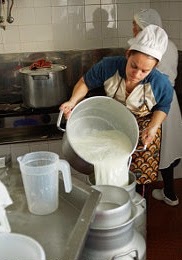 What i found most encouraging was to see the young granddaughter of both these septuagenarian ladies assisting and therefore ensuring the future livelihood of this traditional artesan business.In turn she brought pans of the warm milk to the table,where she drained the whey in a muslim bag and tipped the discarded liquid into the bowl that contained the moulds.The two, now gloved ladies rinsed their hands in this warm liquid.This ensured that every contact with the cheese was covered and no flavour was lost.By this point I was welling up with the nostalgia of the situation and overcome by the strong aroma of the warm fresh cheese.Dona Otilia then explained to us how the cheese was made.
First the milk is boiled.It is then cooled to 56 or 57 ° C. To help speed up the process there are large containers full of water where they put the pots of hot milk . 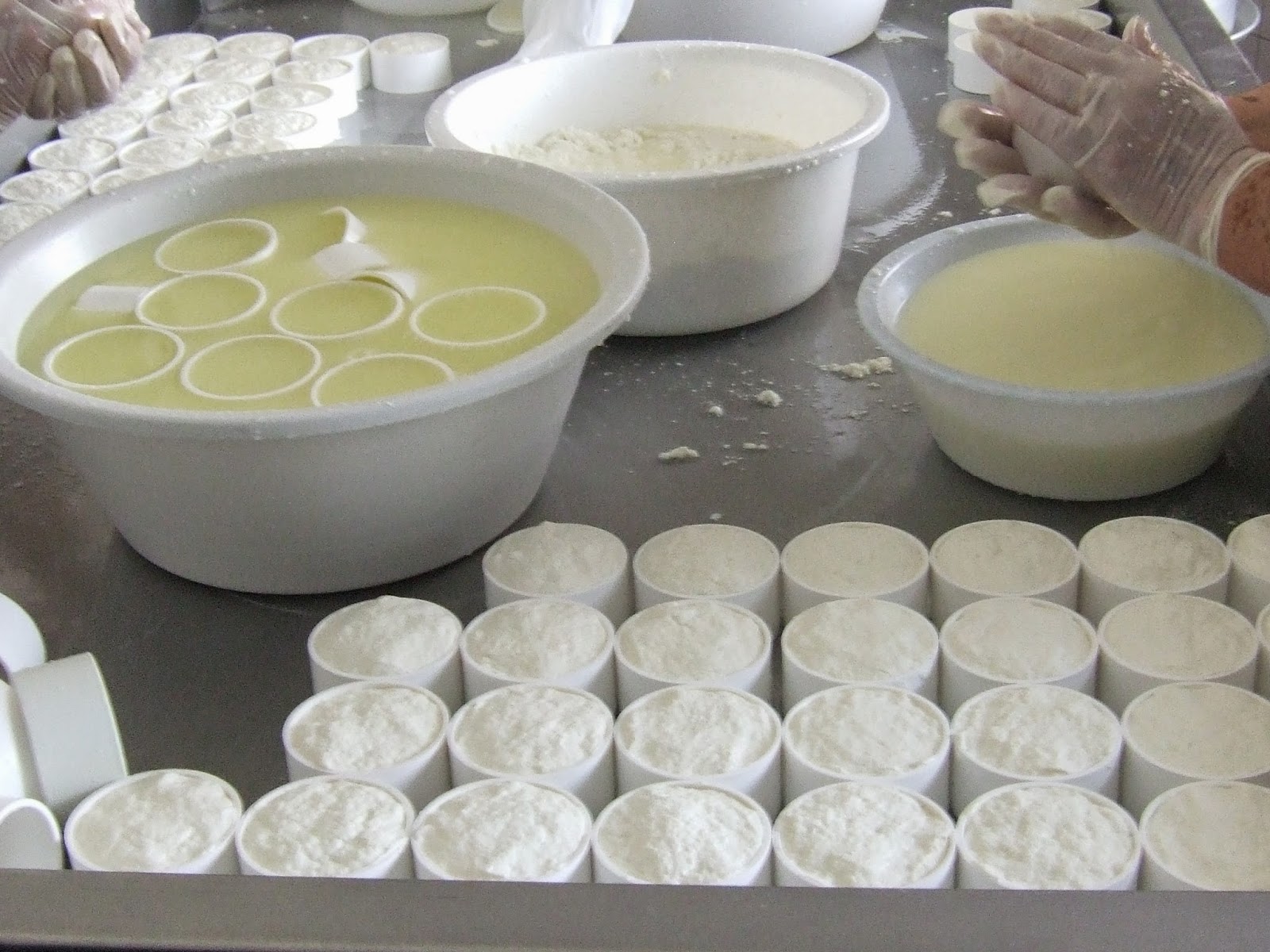 When it reaches the desired temperature rennet and salt are added. The rennet is extracted from thistle flower. The flowers are crushed and placed in water overnight, the liquid is then strained.The result is a chestnut coloured water.This was a surprise for all of us. We knew that the thistle flower was used in some way to curdle milk , but did not know exactly how it was done.Thistle rennet can only be used with goat's or sheep's milk,the other type of rennet being animal based.We left that small room reassured that this method of cheese making was 1000% sustainable.As fellow blogger Raul Lufinha,"Mesa do chef", so rightly put in his blog post- "Não há queijo de cabra… sem cabras"
(“You cant have goats cheese without goats”)

The son of the owner Joáo M.G.Ribeiro has a herd of goats numbering between 150 and 200,which produce the milk used in the cheese making...... 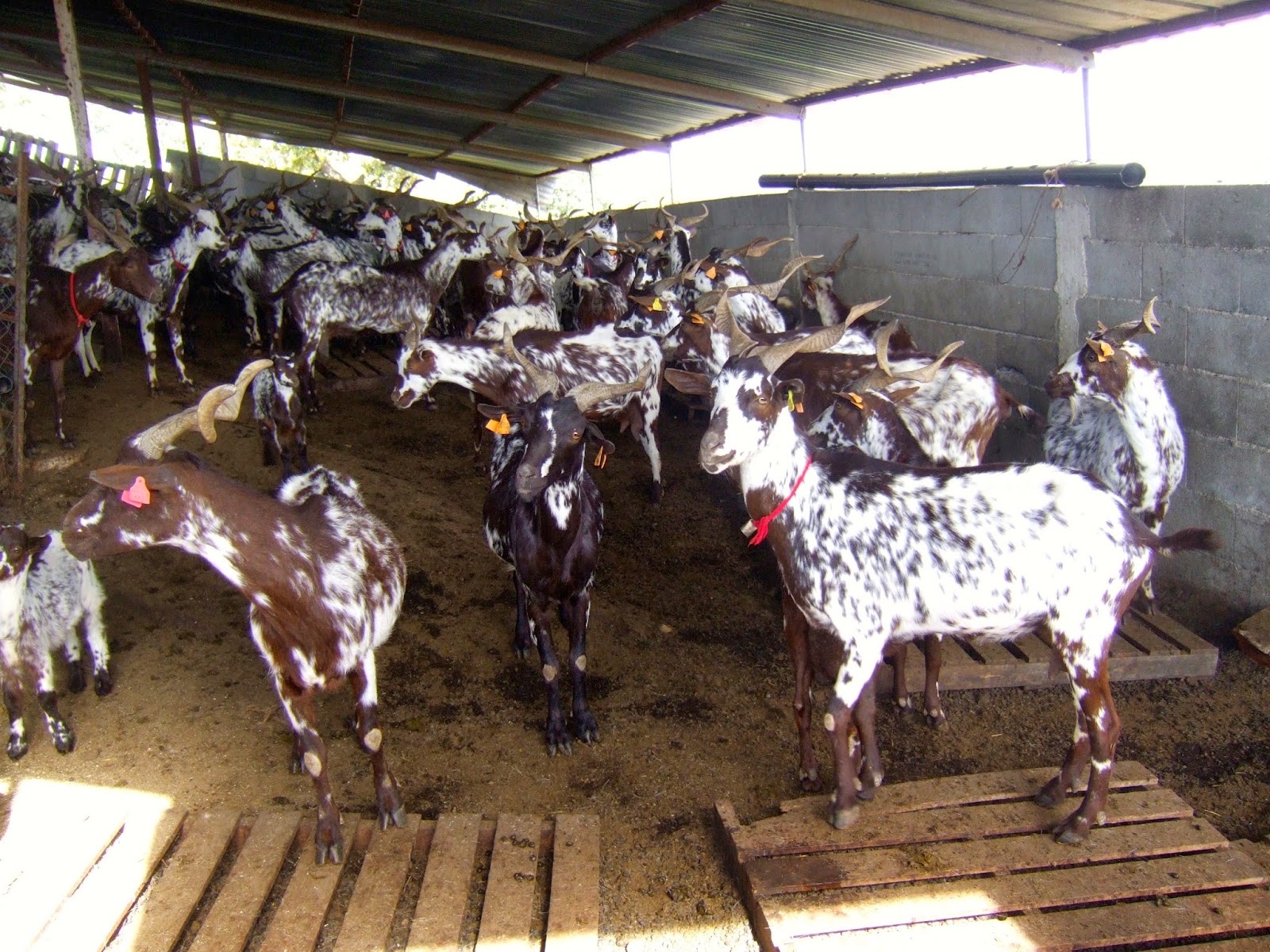