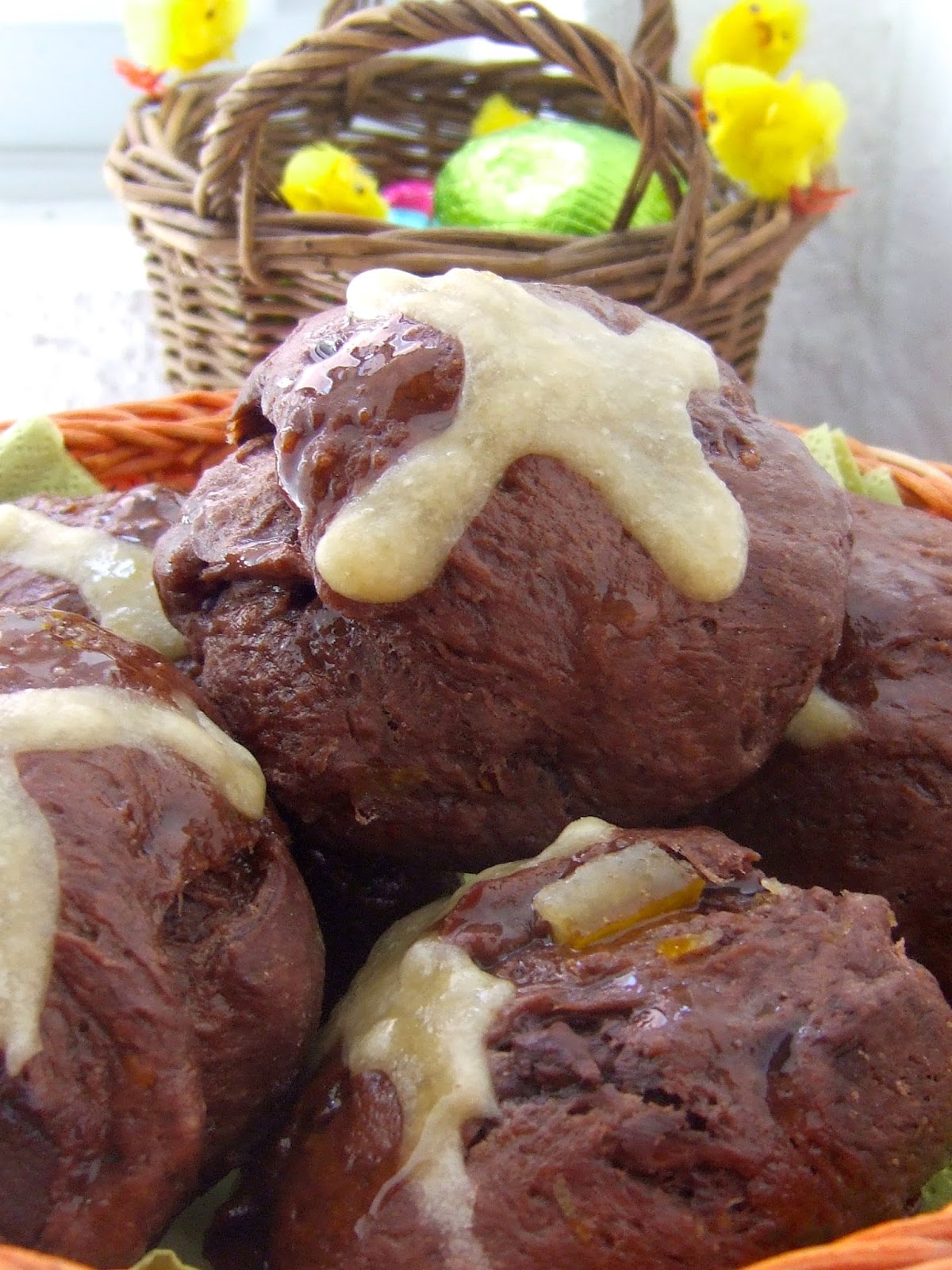 Good Friday is the day I usually make my hot cross buns, but they can be made ahead of time and frozen.The thespian is not partial to dried fruit, apart from perhaps a small whisper in a florentine,so I thought I would appease everybody this time round and replace the dried fruit with chocolate chips,but still retaining the spice quota.
Hot cross buns are traditionally eaten on Good Friday, hot from the oven with lashings of butter. Try this rich Flor de sal chocolate and orange hot cross bun variation,but probably without the lashings of butter.

Sift 400g of the flour, the cocoa powder, mixed spice and salt into a bowl. Add the butter and, with your fingertips, rub together until the mix resembles fine breadcrumbs. Stir through the sugar and dried yeast, then form a well in the centre. Whisk the egg and milk together and pour into the well. Quickly mix with a wooden spoon to incorporate.

Knead on a lightly floured surface for 10 minutes until soft and silky. Shape into a ball. Put in a large, lightly oiled bowl, covered with cling film. Leave for 1½ hours in a warm place, until doubled in size.

Remove the risen dough to a lightly floured surface, flatten slightly, then knead in the raisins (optional), chocolate, zest and candied peel, until everything is evenly distributed.

Divide into 10 equal pieces (about 100g each) and shape into smooth-surfaced buns. Place in rows on a lightly oiled baking tray, leaving a little gap between each. Cover loosely with lightly oiled cling film and leave to prove in a warm place for 1 hour or until doubled in size again. The buns should now be touching each other. Preheat the oven to 200°C/fan180°C/gas 6.

With a serrated knife, score the tops of the buns with a cross. Mix the remaining 75g flour with 1 tbsp oil and 5 tbsp cold water to a smooth paste, then spoon into a piping bag (or a small, clear, sturdy plastic bag with the corner snipped off).

Carefully pipe the mixture in lines along the knife scores on the buns, going first one way, then the other, using a knife to stop the flow.

Bake in the oven for 20 minutes until risen and firm to the touch.

Meanwhile, put the remaining sugar into a pan with the orange juice. Put over a low heat until it has dissolved. Bring to the boil and bubble for 2 minutes until thickened.

Remove the buns from the oven and turn out onto a rack. Glaze with the syrup and serve warm or cold.