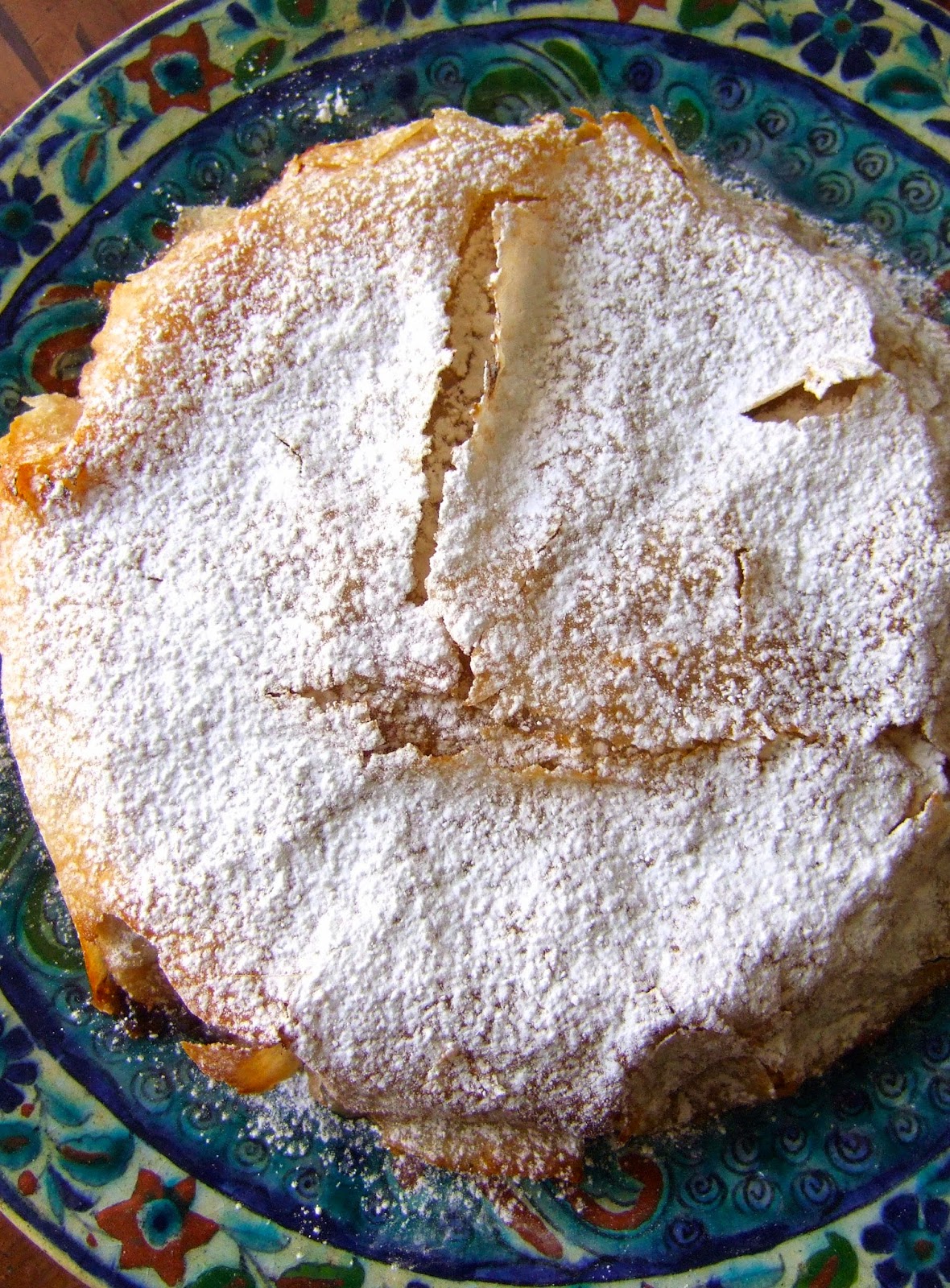 This is the perfect task for a weekend winter afternoon, and if you are selling your house even better.The perfume that fills the kitchen while you are cooking the filling is simply alluring.Its exotic floral tones certainly pip quince at the post, and whats more this wonderful perfume returns to haunt your palate as you savour your first slice. The result is stunning, but it requires time, patience and concentration.You need to be very methodical in your prep and have all the elements of this recipe measured out accordingly so that they are all ready at the various stages of its creation.For instance, the recipe calls for melted butter, completely cooled.The apple filling took much longer to cool than I had anticipated,by which time my butter had solidified and I had to re-melt it.So if you want, prepare the apple filling the day before and keep refrigerated until you are ready to proceed.The whole pie could be assembled and stored in the fridge for a few hours until you are ready to bake it.The original recipe was published in The Times and has been scattered across the Internet ever since.It was most unlike the Times not to credit the original creator of this recipe,and if anyone else had used Times material without permission it would have been pistols at dawn.Anyway, whoever you were, I´m sure you owe your ingenuity to your parents and you deserve merit for your creation.

The method of using layers of buttered phyllo pastry and inverting the pie was inspired by the savoury Moroccan pie, “bisteeya”, but here the filling is vanilla-infused apples. Such a brilliant idea. 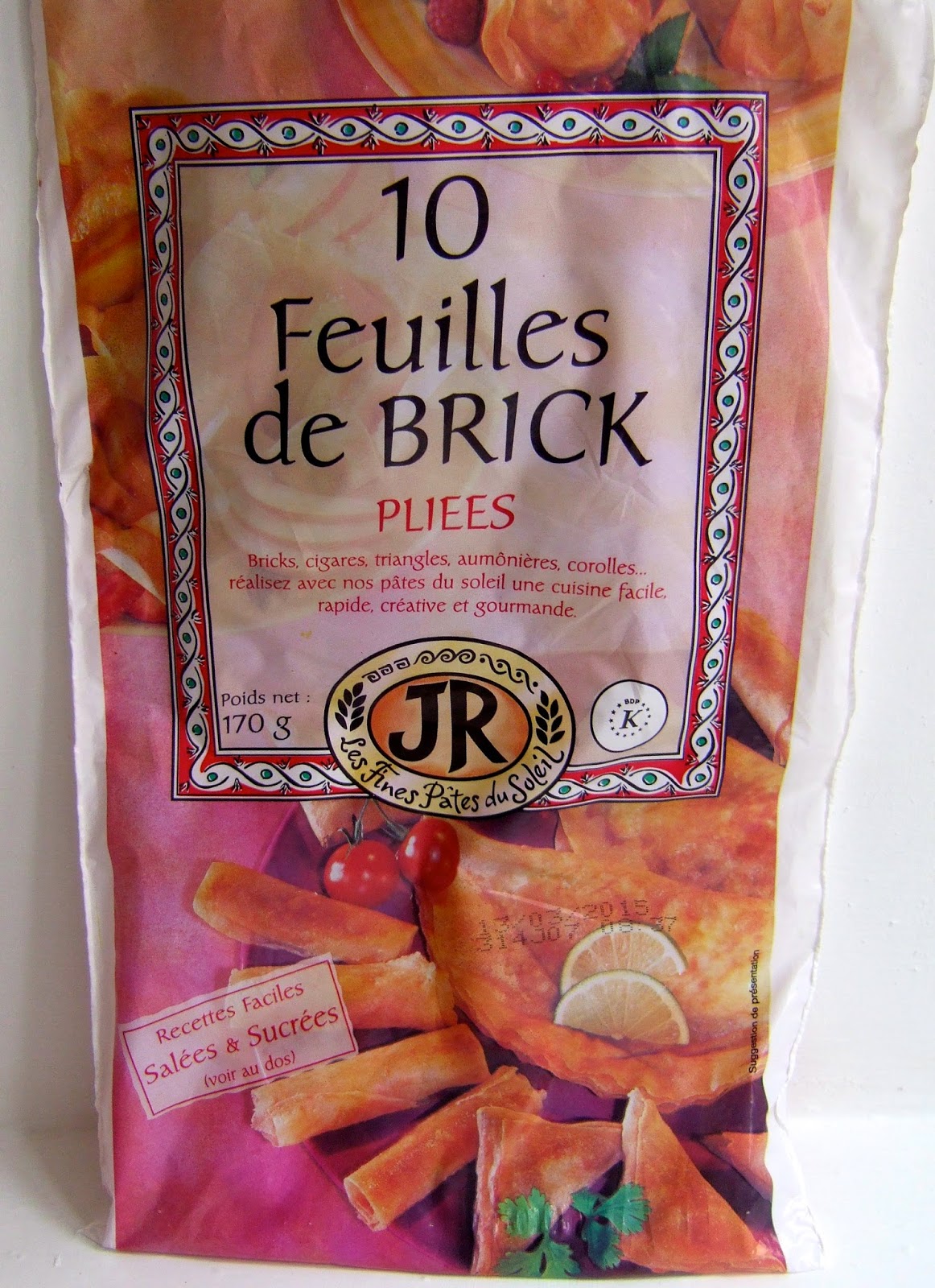 I made one major change to the recipe. I accentuated the Moroccan theme by using brik pastry in place of the phyllo.Plated desserts with impact like this one cry out for Feuilles de Brik.The paper thin, non-brittle and very easy to handle leaves are full of possibilities, and so much easier to work with than phyllo.The major advantage being that you do not have to keep unused sheets covered with cling film or a damp tea towel while you are working (always a bug bear).Since the sheets of brik have a very slightly salty edge to them you have to pair them carefully.The combination of cinnamon vanilla and tart apples is one perfect choice.Back to the brik, this is inspirational stuff.It is a ready made pastry.You can make your own if you are brave and confident enough. Personally I think daily life in a modern kitchen provides us with enough tasks to fill one´s day.("Aga-doo-doo-doo, push pineapple, grind coffee") and all that.
Brik is sold in circular or rectangular sheets,(you will need the rectangular version for this recipe) similar to phyllo pastry, but as I have already said a good deal easier to work with.Brik originates from Tunisia,but most brands are now produced by French manufacturers.The pastry is thicker and more robust than phyllo and does not require endless washings of butter to make it malleable.You can be fairly rough with it too and it stands up to the job.No surprise there then that the French, being no fools, were quick to embrace it. In Tunisia it is usually deep fried, wrapped around a filling of meat, tuna or egg.If you are not a fan of deep frying and never know what to do with the left over oil,here is your answer- bake it, which is much easier and healthier and makes a fantastic crunchy jacket to all sorts of fillings. I can feel that this is fast going to become one of my favourite ingredients over the next few months. 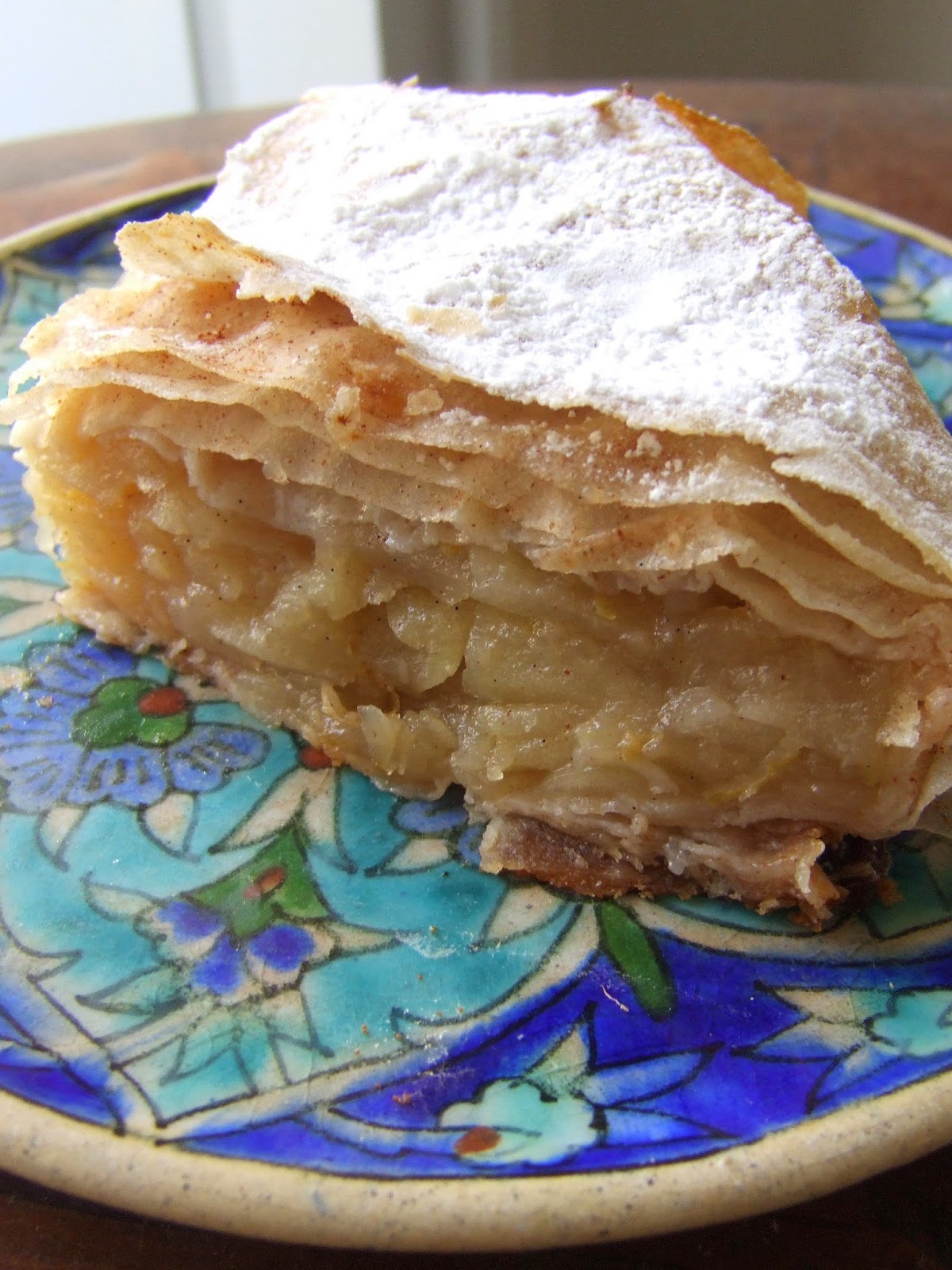 Peel, core and thinly slice the apples. Place into a medium bowl. Scrape the seeds out of the vanilla pod and add to the apples. Add 1 tsp finely grated lemon zest. Add half of the caster sugar into the bowl and toss to evenly coat the apples. Put the remaining caster sugar into a small bowl with the cinnamon. Mix throughly. Set aside. Place the sugarcoated apple slices in a large saucepan with 2 tbsp water and the lemon juice. Cover and cook stirring occasionally over medium heat for 10 minutes or until the apples slices have softened.
Transfer the cooked apple slices into a bowl and let to cool down. When the apple slices are completely cooled down, stir in the cornflour. Preheat the oven to 220 C (425 F). Place a baking tray into the oven to heat.Grease a round  (22cm diameter) cake tin with butter. Lay a sheet of brik pastry on a clean work surface and lightly brush with melted butter. Sprinkle some of the cinnamon-sugar on top of the butter layer.
Repeat this with the next 3 sheets of brik pastry. Gently press the buttered brik layers into the buttered cake tin. Let the ends of the filo pastry hang over the rim. Make a second layered stack from the remaining 4 brik pasty sheets exactly the same way. Then lay this second layered brick pastry stack across the first one in the cake tin, so that the entire rim of the cake tin is draped with brik pastry. Spoon the cooled apple slices into the tin and with the back of the spoon gently, but firmly press them down.
Fold the ends of the brik pastry towards the centre of the tin to cover the filling. Lightly brush with melted butter. Working quickly, remove the hot baking tray from the oven and line with non-stick baking paper. Invert the cake tin onto the baking tray. Remove the cake tin and bush the top of the Moroccan Apple Pie with melted butter.
Bake for 30-35 minutes or until golden and crisp. Let cool down and dust with icing sugar before serving.
Email Post