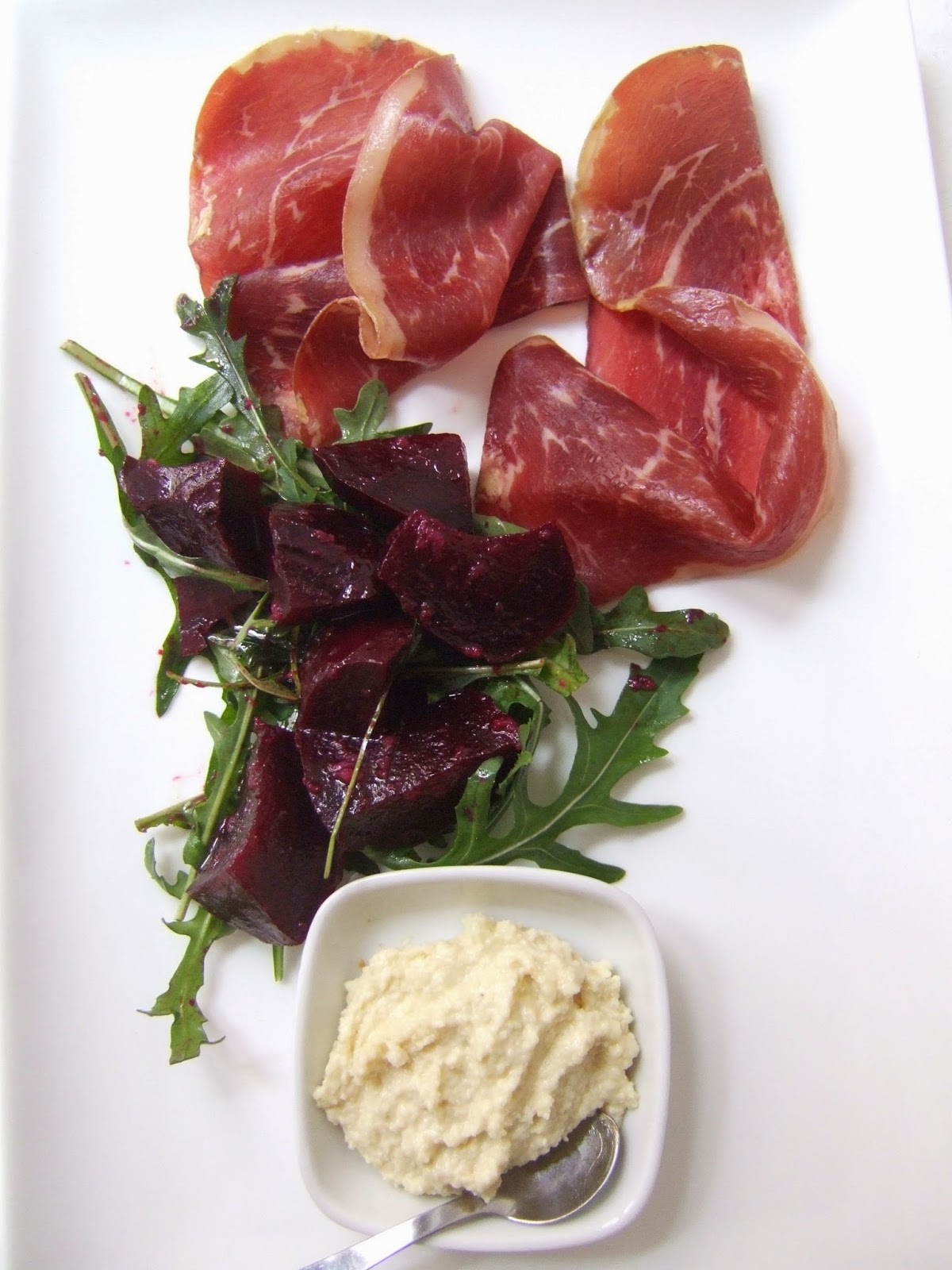 I had not come across, or even heard of, Cecina until June last year, on my first visit to Porto while dining in the brilliant Restaurante (LSD) Largo Sao Domingos with its simple but clever and inventive menu.On quizzing the waitress,I interpreted it was "cow ham."
Cecina is similar to ham but is made by a complicated and lengthy process of curing the hind legs of beef.What arrived on my plate was something that reminded me of one of my favourite cured meats,Italian Bresaola.On tasting, it did not have the sweetness of the Italian cure,which I was informed is cured for less time (5 months).They are incomparable really.
Cecina is salt-cured, smoked, air-dried beef, and is truly a delicacy of Spain. The origin of the word cecina is not altogether clear. There are two main beliefs both of which seem totally feasible given the curing process.
Some believe that it comes from the Latin siccus, meaning dry, while others believe it originates from the Celtic ciercina, and is related to modern Spanish "cierzo" or North wind. The oldest written reference to Cecina dates from the 4th century B.C. The description of the process is the same as it is today. For centuries homes in the Maragara area (in the northwest of Spain) traditionally kept a dried beef leg in the larder to feed the family.

Further research told me that Cecina is a speciality from the provinces of Leon and Zamora in northwestern Spain, where it has PGI status, although it is also produced in the Basque Country and is well known all over the Iberian peninsula. The Cecina de Leon  is famous for its quality, and has a protected geographical identification under the law. The altitude (over 800 meters) and dry climate of Leon is perfect for its production.The production process contains six steps, which are called perfilado, salado, lavado, asentamiento, ahumado and secado or curación. First, the meat is cured in salt for a specified number of days. Any remaining salt on the outside is washed off. It is then smoked in oak for 2-3 weeks. The final step in the process is to dry the meat in special rooms, where windows can be opened and closed, regulating the temperature as well as humidity. The entire process takes 7 months, according to the Regulating Council (Consejo Regulador I.G.P. Cecina de León).
Cecina has a brown crust, which is removed before eating. Inside, it is a dark cherry to maroon colour, with small veins of fat running through it. It is slightly fibrous and has a distinct flavour. Although cured in salt, it is not salty. It is usually sliced very thin and served as an appetizer by itself, or with bread. I loved the colour and wanted to  pull it through so I teamed it up with roasted beetroot and rocket salad dressed with a Sherry vnegar dressing and an almond and horseradish porridge.Cecina,by the way
dries out quickly after slicing,so plan to use it no longer than 24 hours after purchase.I had leftovers from what I had purchased so to avoid the sliced meat drying out,I am going to make some croquetas.More on that story later....

Almond and horseradish porridge
150g whole blanched almonds
11/2 tablespoons prepared horseradish
4 - 6 tablespoons water
25g stale white bread soaked in water
1 garlic clove,crushed to a paste with salt
2 tablespoon extra virgin olive oil
Flor de sal,pepper to taste
In a food processor,grind the almonds to a consistency as fine as possible.Now add 3 tablespoons of the water and process until the almonds form a paste.Squeeze the water out of the bread and add it it to the almond paste with the crushed garlic.Combine well until smooth.Slowly add the Horseradish and the olive oil until you achieve a thick dropping consistency like mayonnaise.season with Flor de sal and pepper.Add the rest of the water only if you need it.
Email Post