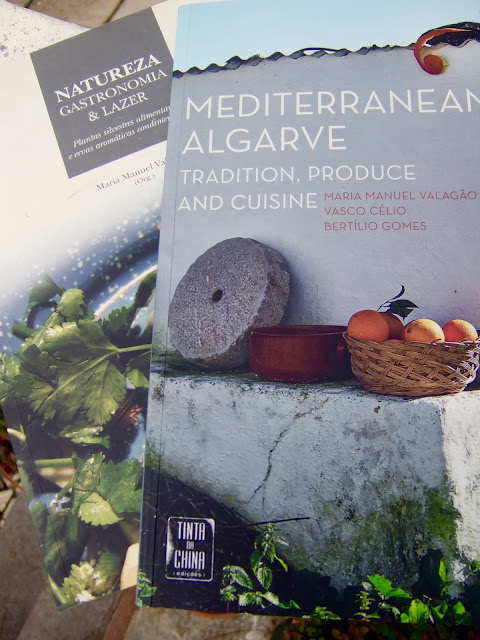 Anyone with a passion for gastronomy will know the importance of its traditions and culinary heritage.No more so than those living in the Algarve ,where sun,sea, salt,wine, olive oil, bread and fish are among its staples.The three authors of this book,who all share roots in the Algarve, set out to find these traditions through a study of the Algarve´s history,landscape and gastronomy.
The book not only nurtures these traditions and shows us how they continue to thrive,
but also suggests innovative ways of giving them a new lease of life. Particular emphasis is placed on the anthropological and social aspects of the region’s cuisine, its produce, cooking techniques and food preservation procedures.
For several decades, Maria Manuel Valagão has gathered the popular wisdom and millennia-old expertise that shape local cooking.

“People already have authentic habits inside them that they don’t even realise. They forget that they hold valuable intangible heritage,” says Valagão*

“It’s extremely important that we create mechanisms so that this knowledge is not lost,” she said.

"The book has a little bit of everything", she explains, but focuses mostly on the traditions that set the Algarve apart from everywhere else.
I have been fortunate enough to meet Maria Manuel Valagão on a few occasions.One of her previous books Natureza, Gastronomia & Lazer  was somewhat of an inspiration to me, both in the way I started to look at natures bounty and also in the way I adapted it into my style of cooking
Written alongside photographer Vasco Célio and Chef Bertílio Gomes, ‘Algarve Mediterrânico: Tradição, Produtos e Cozinhas’ took four years to bring to life and was a result of a dream that had been in the pipeline for a long time.This magnificent volume thus provides a comprehensive picture of the Algarve’s cultural heritage and culinary landscape, as enhanced by Vasco Célio’s photographic vision and chef Bertílio Gome’s contemporary recipes.
The romance of the Portuguese language and its distinctive vocabulary is evident throughout  in the superb translation by Jethro Soutar.I was never conscious that I was reading a translation. The Guardian writer Kevin Gould was in charge of copy editing for the English edition, and apparently  accompanied Valagão on some of her trips through the Algarve.This work should be compulsory and essential reading for any chef, chef manager and restaurant owner in the Algarve.Only then will the culture of ementas turisticas offering Piri piri chicken and sardine paste, the ubiquitous salted cod (bacalhau), all served with the same trio of accompaniments – rice, potatoes and salad,be eradicated and a new wave of gastro tourism be introduced to the seeming wealth of tradition that the mainstream Algarve has lost.
*Valagão – holder of a PhD in Environmental Studies – has 40 years of experience in similar initiatives and has already carried out studies in the regions of Minho, Alto Douro and Alentejo.
Email Post