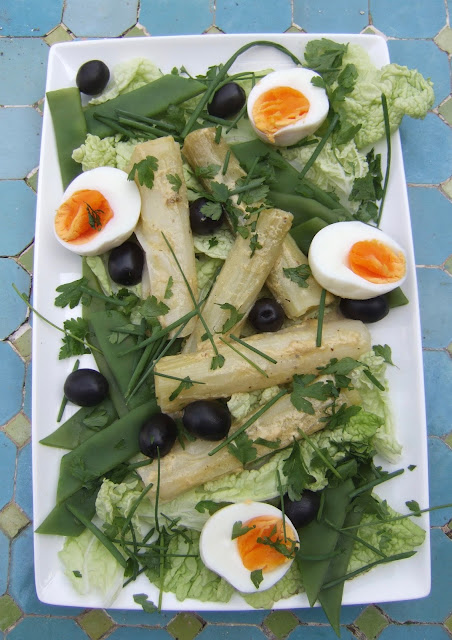 "I have heard of you, Monsieur Poirot," and Poirot made an unsuccessful attempt to look modest.”    ― Agatha Christie, Taken at the Flood

Poireaux,puerro, porro. Depending on what country you are in this is the word for the noble leek, except that is here in Portugal where it comes under the guise of French garlic, Alho francês.I was aware that Mr Ottolenghi was championing cauliflower a while back and now I have taken it on my own to laud the leek and honour it for what it is.Consider the leek. It’s majestic, a titan of a vegetable that belongs, along with onion and garlic, to the genus Allium. Mostly just the white and light green parts are eaten, though the darker green parts have plenty of flavour and can either be cooked longer to tenderize them, or used when making homemade soup stock.This is the funny thing about the green leektops.Recipes always say “use the white and pale green parts only,” and discard the rest.I often use the green part of the spring onion in recipes.I refuse to discard something that if treated with respect will give you an abundance of flavour.Over the next few months I am going to post a variety of recipes involving the leek that shows off its versatility.Always the bridesmaid never the bride, this glorious vegetable deserves a certain reverence on the altar of gastronomy.Here in Portugal it is available in the markets throughout the entire year.I feel it is important to mention this as many will not have thought of using the leek in the summer months.It can add that little  je ne sais quoi and subtlety to a simple soffrito, refogado or tomato sauce.

Winter salad Niçoise wrapped or unwrapped
3 thin to medium leeks cut into thirds
2 chopped hard boiled eggs (7 minutes exactly)
Black olives
Chinese leaves
parsley
chives
For the vinaigrette-
(this will leave you with plenty to jar up and store in the refrigerator)
300ml extra virgin olive oil
125ml white wine vinegar
1 tablespoon Dijon mustard
1 teaspoon Flor de sal
1/4 teaspoon finely ground black pepper
1 clove garlic
generous sprinkling of Herbes de provence
Make the vinaigrette by placing all the ingredients in a food processor until well emulsified.
Trim the leeks and wash them thoroughly
Cut off the dark green tops, leaving about an inch or two (or three if you like the more strongly flavoured greens) on the shaft. Cut off the roots, cutting as close to the roots as possible, to help keep the leeks together while they simmers.
Bring a pan of salted water to a rapid boil.Once the water is boiling, carefully place the cleaned and prepped leeks into the water. Return to a simmer and lower the heat to maintain a simmer. Start a timer and cook for 8 to 10 minutes, or until the thickest part of the thickest leek can easily be penetrated with the tip of a sharp knife.
If your leeks are about an inch thick, they should just begin to be turning from bright green to olive-y green at the 8 minute mark. Thicker leeks you'll want to cook a little longer. Use tongs to gently remove the leeks from the pot and place into an ice water bath to stop the cooking.
Remove the leeks from the ice water bath and let them drain. Place the leeks in a rimmed, long serving dish (a Pyrex casserole dish would work for this as well). Drizzle some vinaigrette over the leeks. Gently turn the leeks over and drizzle a bit more vinaigrette on the other side.
Cover with plastic wrap and let the leeks marinate in the vinaigrette for at least 2 hours, or up to 3 days. (Chill if marinating more than 2 hours. The longer they marinate, the tastier and more tender they become.) The leeks should be served at room  temperature.

In a bowl dress the leaves lightly with some of the vinaigrette.Add the olives boiled eggs and finish with generous amounts of parsley.When you are ready to serve, compose the salad on a platter,arrange the leeks vinaigrette on top and finish with a scattering of chopped chives.
Alternative: carefully put inside a tortilla wrap and roll up in the normal way