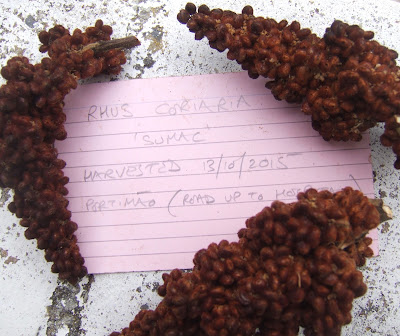 I haven´t written about foraging for a while now.This is because I haven´t found the time to venture out into the wild with this mission in mind. I was however recently the recipient of a bounty of sumac from a fellow forager and one of our guests who has now visited Casa Rosada on two occasions. Like ourselves he and his vivacious wife( who co-incidentally came to us by this blog) have made the Algarve their choice for retirement.
There is always something fascinating to learn from Brian.I was particularly taken by him  waxing lyrical on a new way of preserving Danish plums.On his first visit I learnt from him that Sumac (Rhus Corairia) actually grows in the western end of the Algarve.Can you imagine my excitement, I needed not only to find out more, but find and forage some for myself.I never managed and one year later on their second visit he brought me a few branches to try.He calls himself " a botanist and retired lecturer in aquaculture "....or perhaps... just superhero would be more appropriate?
Sumac is the product of Rhus coriaria, a bush that grows in Mediterranean and Middle Eastern climates. Its berries, usually sold in the form of glistening, deep red flakes, have an astringency tempered with fruity sweetness. It's most commonly used in the spice mix za'atar, the beguiling Lebanese condiment, along with thyme, sesame seeds and salt, but it definitely earns its place in my Algarve kitchen.I rub it on oily fish or pork chops before grilling, stir into steamed vegetables with a little butter or olive oil, sprinkle over tomato salads or grilled onions. For an intriguing one-fruit salad that takes you back to old fashioned half-time refreshment,I scattered it over sliced oranges; mix it with garlic, ginger, chillies and yoghurt for a very good marinade for lamb or chicken kebabs.
The right kind of sour makes things taste brighter, cleaner and sharper – think of that squeeze of lemon over a piece of fish, or a splash of lime in a salsa; it zings the thing right up. But If you have not already come across this tangy, sweet-sour spice,I want to introduce you to something you may have not cooked with before, something that takes you way beyond the familiar tang of citrus.
It delivers sourness with intriguing depth and character. It’s better, I think, than paprika for making a stunning dusting on top of hummus or a plate of fish.
Whether anointing your creative plate with its dust or making it an integral part of a dish now is the time of year to betrothe it with some lovely Sevillian orange.What claims to be the "greatest British biscuit"can be made even greater with a tarter than tart and tangy dust and the grated zest of bitter orange. 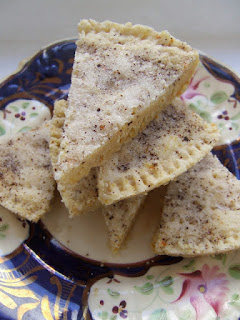 
150g(5oz) plain flour
25g(1oz) fine polenta /milho (for added crispness)
50g(2oz) caster sugar
125g unsalted butter
Grated zest 1 large Seville orange
Topping 1 tablespoon powdered wild sumac
and sprinkling of caster sugar
Sift the flour into a bowl.Rub the grated orange zest into the sugar with your fingers. Stir in the Semolina,followed by the zested sugar.Add the butter.cut it in with a knife and then rub in with your fingertips.Draw the mixture together to form a crumble mixture.Transfer to an ungreased 17.5cm (7inch) diameter tin.Press out smoothly until the tin is covered with an even layer of the mixture.Spread the surface evenly with a palette knife.
Ridge the edges with a fork and then prick it all over at regular intervals to give a typical shortbread effect.Sprinkle with sugar.Bake for 1 hour in a pre-heated oven 180C/ 300F /Gas mark 3 The shortbread should be the colour of pale straw. Remove from the oven.Dust with a fine carpet of Sumac.Cool to lukewarm then carefully score into 8 wedges.Carefully ease the shortbread from its tin.Transfer to a wire cooling rack until completely cold.