Whats at steak? trying to solve the mystery of the rib-eye is something to beef about 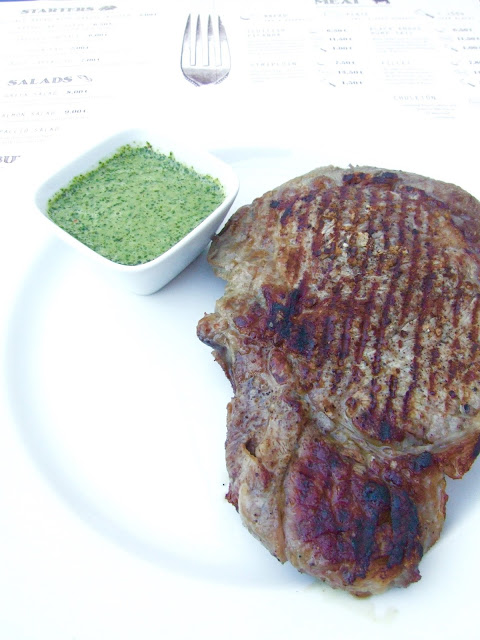 The steak is the connoisseur’s meat dish; a subject of debate, delight and potential disappointment.The crimes however that have been committed in the name of one cut, the rib-eye, are unforgiveable.I for one have been on the receiving end of being fobbed off more than once with something claiming to be a Rib-eye.
Ordering a steak is a pretentious moment when you have to tell the waiter how you like it cooked.it brings out an inherent manliness in me. I end up attempting to bamboozle the waiter about how I want it done.Years ago I would say "well done".can you believe this was what I was used to pre 1980 - grey meat. Soon I realised this was terribly de trop, and started saying "medium". Later still I progressed to "rare".Recently since moving to Portugal  I have been saying,with an airy wave of the hand,"mal passado"or in a French restaurant in Lisbon "a point" I don´t know what " a point" means,but, crucially nor do most waiters,but it doesn´t seem to make any difference anyhow to how the steak is cooked
One evening a few years ago we set out together with two expat friends for a potentially nostalgic evening.The common denominator between us all that not one of us had tasted a rib-eye steak for two years since we had left Blighty.The reason soon became evident.The meal should have been memorable and it was, but for the wrong reason.Hard as I try to erase it, it is imprinted on my memory as a bad evening.The ambience of the restaurant was the perfect setting to enjoy a fine dinner.We were given a round, candle lit table nestled under an exposed brick arch.The ritual of ordering and being served was a long drawn-out process.I will not dwell on our starters as that was another bad experience in itself.When the four so-called "rib-eye steaks" arrived we all  looked at each other in silence and then decided to tackle what I can say was a beautifully cooked piece of meat, which  in no way resembled a Rib-eye.The waiter/owner/ maitre-d` arrived at the table and asked if everything was alright.One of our friends replied "you have a chef at the table,why don´t you ask him". I told him that what he had served us was not the four rib-eyes we had ordered. "Well what do YOU call them he said."Excuse me", I said but I hope I am not mistaken in thinking you are French and in France you would call this a pavé de boeuf." "I am responsible for writing the menu and I must have made a mistake in the translation". Poor excuse we all thought.

In French cuisine the rib steak (with bone attached, called côte de bœuf, literally: "beef rib") is a very popular dish and it is not uncommon to find French restaurants where a massive single côte de bœuf is served for two or more dinner guests. The French entrecôte corresponds to the rib eye steak, that is, a rib steak separated from its bone.
What we had been served was a cut of beef of which all the fat and connective tissue from the large heart of the steak had been removed leaving a tasty, fairly tender and complely trimmed hunk that resembled filet mignon.This cut I had been served before.It is cut like a filet but is called pavé and is very often used for steak au poivre.
I have to concede that the language of cuts is a little vague, with variations in names being found from one butcher to the next (thankfully not the case with surgeons). A prime rib steak can be taken from any of the ribs, but can also be sirloin on the bone.
With prime rib, you’ll get a bigger cut than rib-eye,  very often weighing anything upward from 600g- 1kg. It has more flavour than rib-eye, because anything’s better cooked on the bone. I’d also rest it longer and serve with the same sides as you would the rib-eye. 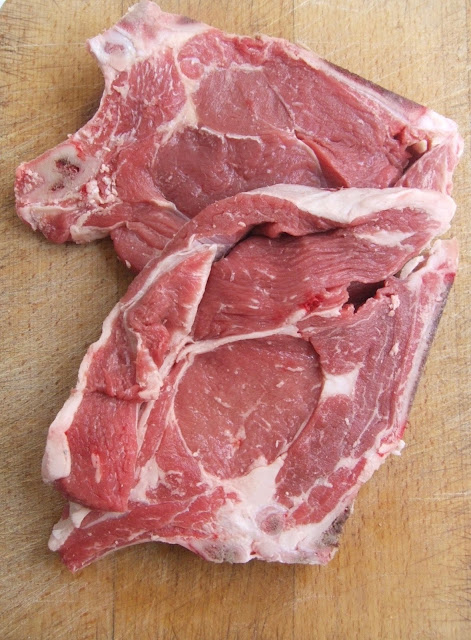 I was lucky enough to find these beautiful organic rib-eye steaks (Novilho Biológico costelatas ) can you believe in my local supermarket Pingo Doce last weekend.Proudly reared, slaughtered and cut in Portugal,they were every little bit what I expected of them
Fat is key to the rib-eye’s appeal. One of the fore-ribs, it usually has no bone in and no fat around it; instead, it is infused with the stuff. It’s an important factor when buying your steak

The fat content is what gives it a lot of flavour. Get your butcher to cut it at least an inch thick and cook it a bit more than some steaks — medium or medium-rare — so it can absorb the fat. You don’t want fat with fat, so I’d suggest serving with a nice tomato salad. For a 250g steak, you’re looking at 4-6 mins for medium-rare, 6-8mins for medium, although times are never precise. 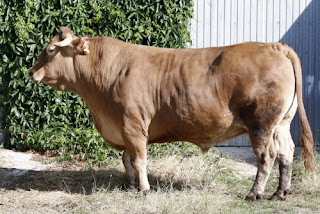 My favourite Rib-eye has to be the Spanish Chuletón Gallego.El buey gallego the Galician ox is the main stronghold of the Galician Blonde breed, the icon of the meat cuisine and the most international of Spanish beef.That is why cuts can be found in markets and butchers outside of Spain.
The type of fat infiltration in the muscle gives it the mottled appearance, called marbling, which is responsible for its organoleptic characteristics: tenderness, juiciness, and intensity of flavour.

My suggestion to wash it down  would be something fruity to counter all that fat, an Assobio D.O.C Douro 2014.The Tinta Roriz*,touriga Franca and Touriga nacional grapes give you an attack of redcurrants rose petals and  a refreshing cherry flavour left in your mouth.
* NOTE Tinta Roriz | Aragonês - This is one of the rare grape varieties to be prized on both sides of the border. Tempranillo to the Spanish, the Portuguese call it by two different names depending on the region: Aragonês and Tinta Roriz (the latter name is used only in the Dão and Douro regions). In recent years it has spread rapidly throughout the Dão, Ribatejo/Tejo and Lisboa regions. It tends to be blended with other varieties, typically Touriga Nacional and Touriga Franca,and also with Trincadeira and Alicante Bouschet in the Alentejo.