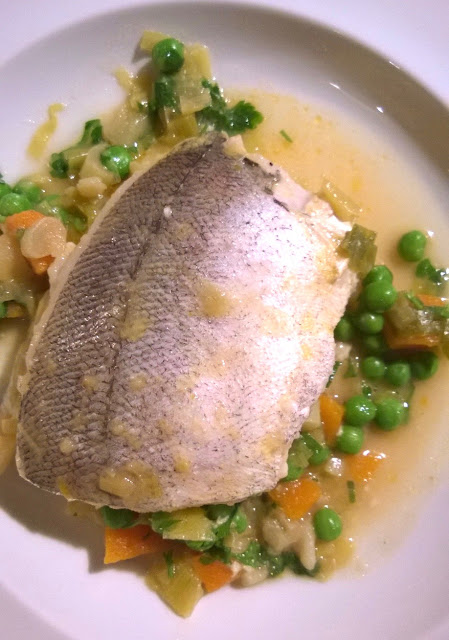 A delicate ,summer dish in which the fish is spiked with anchovy butter and served with a broth of the "juices" of young leeks and peas.Sounds promising ?As I developed this dish I was not sure that it was going to emerge as the dish I had imagined.After making the leek broth I thought it looked a bit on the robust and heavy side,however when I re-heated the broth to poach the fish in, it thinned out and when I removed the fish and added the peas and parsley I was left with a beautifully cooked dish that was fresh and light and I could only describe as "of restaurant standards".The irony here is that the recipe that I took as my starting point was originally a restaurant dish created by the controversial and highly successful Catalan master chef Santi Santamaria, one of the most celebrated Catalan chefs and the first in Spain to be awarded three Michelin stars. Santamaria was one of the leading figures in the huge boom in Catalan cuisine over the past 20 years.

A self taught chef, like myself, he teamed traditional Catalan recipes with French nouvelle cuisine insisting on the importance of locally sourced fresh produce.He was considered a leading ambassador of Catalan cuisine.He died suddenly of a heart attack in 2011, aged 53, while showing journalists round the kitchen in his new and third restaurant in Singapore.So this recipe which I have altered quite considerably  pays tribute to the late great Santi Santamaria.I hope that he would have approved  my own interpretation of his original dish.
Hake in a pea and leek broth
serves 4
1 fresh hake, 2kg /4lb 8oz approx.Divided into two fillets
100g / 31/2 oz anchovy butter
2 tablespoons finely snipped chives
300g young peas
1tbsp chopped parsley

Take the two fillets off the hake. Dry with paper towel.Spread the anchovy butter over the underside of each fillet,scatter with the chives, and sandwich the two fillets together. Set aside. Lightly blanch the peas in boiling water.drain and cool under  cold water.
TO MAKE THE LEEK BROTH, peel and chop the vegetables.Heat the oil in a casserole and lightly fry potato for 10 minutes.Add the carrot and lightly fry for 10 minutes.Add the leeks and gently fry for 10 minutes.Add 1 litre /13/4 pints of stock,and cook gently for 30 minutes. Add salt to taste. Cut the fish "roll"into four portions.Place into the leek broth.Cover and gently poach for around eight minutes, until the fish is just cooked.Remove the fish and place on four pre-warmed dinner plates.Add the peas and chopped parsley to the broth and heat.Spoon the broth and vegetables around each fish and serve.
Email Post