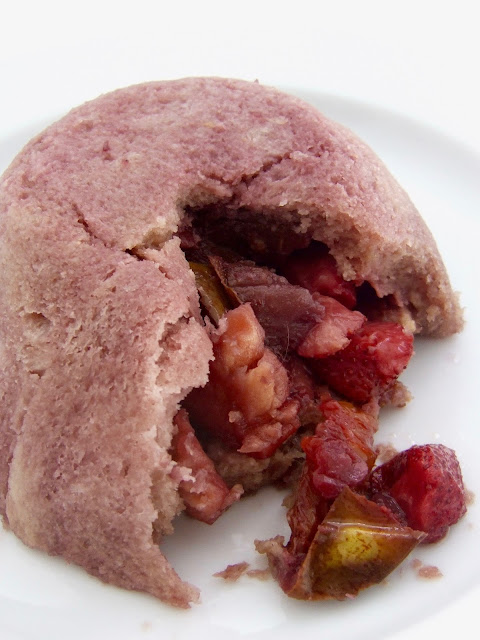 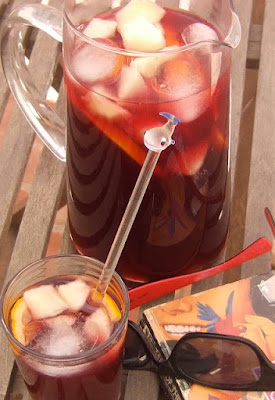 Who said you don´t muck around too much with summer pudding,which is why some people are not keen on the idea of adding alcohol.I have become very European about it, and that is how this version of Summer pudding came about. Our guests here at casa rosada love a glass or two of my sangria.The most recent of which commented on the best sangria they had ever had, mixed by Bruno at "La Petite France" in Tavira.Bruno puts Triple sec in the mix,so my version cant be far off as I use casa rosada´s home made licore de laranja whish is made with the macerated peel of bitter Seville oranges.The guests agreed mine was very similar in taste. I make it two days in advance of serving, allowing the fresh fruit, pears apples and peaches to macerate and soften in the alcohol. I then discard the fruit having done their job and replace it with fresh fruit before serving. It was at this point that I realised there was a potential in this waste, I could it add it to some strawberries and other available berries ( you have to bear in mind seasonal availability here)and turn it ito a sangria summer pudding.There is always day old bread in Portuguese homes and there is always call for sangria so everything in place for making summer pudding.
For those unfamiliar with the joys of this classic ( probably those who took the "great "out of Britain by brexiting), it was great seasonal classic.A summer pudding is made by closely lining a pudding basin with bread, and then filling it with summer berries,  lightly cooked in sugar to take the edge off their tang. The pudding is then chilled, weighted down so the bread soaks up the fruit juices, and turned out before serving, like a rather stolid jelly. The French would no doubt use brioche, or the Italians panettone for the purpose, but in Britain, it's always white bread.
As I said you don't want to fanny around too much with summer pudding but, as this is a British pudding there must be a margin for eccentricity.Summer pudding is so British that Salman Rushdie once referred to it when characterising a certain kind of British upper-class woman's voice.The berries have a delicate flavour that's easily overpowered, which is why there is a consensus of opinion  on the idea of adding alcohol, as Tamasin Day-Lewis does with her raspberry liqueur,or the Australian recipe which includes gin! Ballymaloe Cookery School does it with a geranium infusion.Incidentally I noticed that they also get get very Marie Antoinette with their version, which involves baking something called a "Great Grandmother's Cake" (rather like a Victoria sponge) and then cutting it up to use in place of bread.No way Jose,what would my mother have said? Cake just does not work here – not only is it hard to slice thinly without crumble issues, but it's simply too dense and sweet for the dish and competes with the fruit.

NOTE:Summer pudding was invented in the 19th century as an invalid or diet food, since the bread was less fattening than the rich pastries that were the casing of many fruit desserts. Served in spas, it was known as hydropathic pudding before being recognised for the glory of the summer table which it has since become.

Sangria summer pudding
The fruits you use here are entirely up to you but bear in mind the colour that will be given by the juices being released.You ideally want a rich ruby red to purple look to the pudding when you serve it (see picture above where I did not add enough dark juice) and I have always added, as my mother did, apples and pears which give it a certain texture.
Whether you make individual puddings in ramekins or a large one in a pudding basin is again entirely a personal choice.

Put the strawberries, raspberries redcurrants blackberries whatever fruit you are using and sugar in a heavy-based saucepan over low heat. Heat gently and briefly - no more than 3-4 minutes - until the fruit begins to bleed and the sugar is dissolved. The fruit must not lose its shape or start to cook.
Line a 1-litre pudding basin with slices of day-old good white bread. Make sure there are no gaps.
Using a perforated spoon, pile in the fruit, reserving some of the juice left in the saucepan. Sprinkle 1-2 tablespoons of sangria over the pudding then add a top layer of bread.
Cover with a plate that just fits, weigh it down, and put the basin in the fridge overnight.
Just before serving turn out the pudding/s onto a plate with a decent-sized rim.
Add a drop more sangria to the reserved juice, then brush it over the pudding.
Email Post