O brigadeiro - The brigadier and his cannon balls 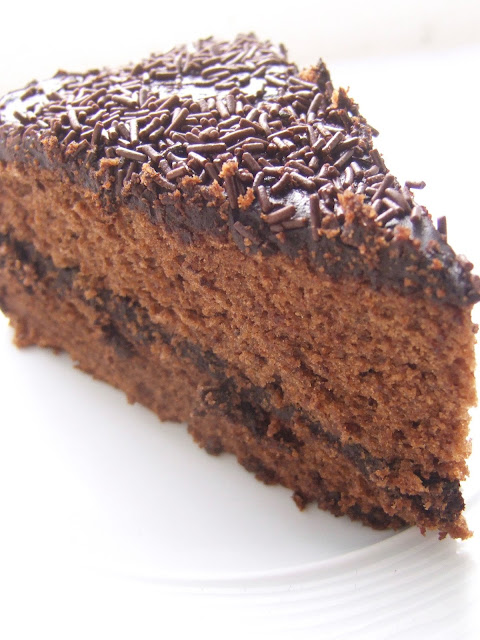 Hard to resist...I know....
Bored of the same old chocolate cake recipe that your mother passed on to you? Well there is nothing wrong with that, but maybe its time for something a little different? Well, here is a cake of Olympic proportions for all of you hardcore chocolate fans. It is a well known Portuguese cake that is called “bolo brigadeiro”. In English you could translate it as brigadier cake. I know, it sounds strange but I can assure you that this chocolate cake is one of the best ways of eating chocolate as cake.One popular way to recreate the brigadeiro is to turn it into a rich, moist chocolate cake. The cake part is usually some sort of standard chocolate cake, the brigadeiro part being found in the frosting. It is not hard to make and the effort pays off, believe me.
It is named after a brigadier general Eduardo Gomes who tried to conquer the hearts of voters, using the brigadeiro as a way to raise funds while he was campaigning for president. The brigadeiro is made from sweetened condensed milk, cocoa powder and butter,which when combined give the depth and intensity to this Brazilian obsession.The brigadeiro mixture is then shaped and rolled into little fudge balls.
The brigadeiro, created in 1940 is common throughout the entire country, as well as in Portugal, and is present in practically all the major Brazilian celebrations.It contributes a big part of the Brazilian culture and is said to be a national icon. I thought with the Olympics running in Rio for the next two weeks it would be an appropriate time to venture into unchartered waters and bake my very first brigadeiro cake. As it turned out the brigadeiro experience is way way better than any track or field event.
When made in Brazilian homes, the brigadeiro can be eaten straight from the pot
( dangerous!!!!) while one watches TV (must try this), which is why it can sometimes be called "spoon brigadeiro". I must say I tried hard to resist but while spooning the brigadeiro mixture onto my chocolate sponge I had to "spoon" some into my mouth so leaving no brigadeiro for my original plan which was to  serve up the balls version all around the cake to honour the brigadier and his cannon balls.Next time perhaps.I think my first endeavour deserved bronze but next time with more practice I´m going for gold. Make the sponge cake:
Preheat the oven to 180C(350F).
Grease a round spring form cake and dust with some flour.
separate the yolks from the whites.Beat the egg whites until stiff peaks form and reserve in the fridge.
Put the chocolate broken into pieces with  the butter in aheatproof bowl over apan of boiling water and stir with a fork until you get a creamy mixture. Set aside.
In an electric mixer,beat the egg yolks and brown sugar on medium speed until you obtain acreamy mixture.add the melted chocolate,milk and mix for 3-4 minutes until it´s nicely incorporated.Reduce the mixer speed to low,add the flour mixed with the baking powder and beat until you have obtained a homogenous and creamy mixture.Finally with a spatula fold in gently the egg whites.
pour the mixture into the prepared cake pan and bake until atooth pick inserted in the centre comes out clean,about 40 to 45 minutes (the time depends on the oven).
Make the topping:
in asaucepan place the milk,cocoa powder,condensed milk and whisk nicely. Place the pan over alow heat and stir occasionall with awooden spoon until the cream thickens (about 15 minutes)
Turn off the heat and allow to cool for about 5 minutes.
Carefully slice the cake in half with a long knife.
Place the bottom slice of the cake on aplate and spread with an even layer of the brigadeiro cream.
Cover with the top slice of the cake and cover completely with the remaining cream.
Garnish the cake with sprinkles and store the cake in the fridge until ready to serve.