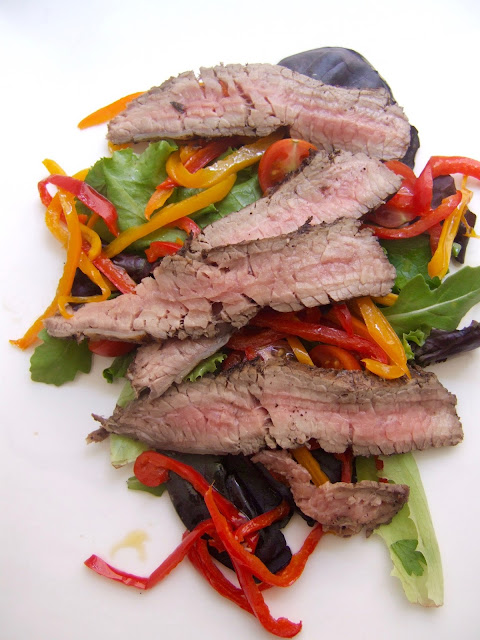 Just how simple yet spectacular can grilled steak be? Onglet tu dis, sirloin you say.Por que não peito alto? Everyone has their own favourite cut.But of course the cut you choose is determined by how you want to cook it.
Hang about, every time I´ve read a newspaper or tapped into a blog recently,everybody´s banging on about Hanger steak. I have been following the Portuguese culinary ambassador to London Nuno Mendes column in The Guardian and he came up with a recipe for a seared beef salad with a herb puree. I have to say it grabbed my attention not only because I have a soft spot for steak salads, but because the cooking method fascinated me. I bookmarked it, but where could I get hold of "quality aged hanger steak" here in the Eastern-most Algarve.Without the contacts in the trade I would have great difficulty I would say.Surely this was  a delicacy reserved for the likes of high-end city restaurants.
Not having even heard of the name before, it sounded to me like an indie band that hasn't quite hit the top-40 mainstream status yet, but is big enough that everybody other than me had heard about. Most I assumed would have have even given it a try. If you lived in France, you would have seen it on bistro menus as onglet—a popular cut for steak frites. Elsewhere it was called butcher´s steak because the butcher used to take it home if it hadn´t ended up in the mincer. After browsing endless maps of the beast and what the equivalent cuts were called in different countries I set off armed with some photocopies to show my butcher and explain what I wanted to achieve.
I had discovered that it is cut from the plate section of the cow (the front of the belly), it "hangs" off of the cow's diaphragm, so hence the name. it did not take long before the butcher identified what I wanted to be Peito, or more specifically Peito Alto -  a first for me.I returned home and the thespian immediately said well it certainly looks like onglet, so things were looking up.I returned to the Nuno Mendes recipe and decided I would proceed with his cooking method, but I would change the way i was going to serve the salad.I wanted to make it my own.First of all I introduced a marinade into the equation.I cast my memory back to a seared sirloin salad I had eaten back in the London days at Moro in Exmouth Market.They had marinated their steak in Sumac giving it a fruity tartness and then contrasted that with sweet white grapes. I had the beginning of my recipe and everything that followed just fell into place. The steak amazingly is seared not once not twice but six times on each side resting it in between and re-seasoning it each time with Flor de sal.Try it, this may seem an unusual way to cook steak, but the light touch preserves the integrity of the meat and produces the juiciest melt-in-the-mouth slices of steak you can possibly imagine.The secret I found also is to allow a generous resting time ( at least twenty minutes) at the end.Served cold the next day it was even better.

Mix all the marinade ingredients together and rub evenly over the steaks.leave to marinade for a good hour or two.Bring the meat back to room temperature
While the meat is marinading de-seed and trim the peppers, julienne.
Heat a small knob of butter and a tablespoon of extra virgin olive oil in a pan and sautée the peppers over a gentle heat until soft about 10 minutes.set aside to cool completely.
When the meat has marinated sufficiently, in a very hot non-stick pan, sear the meat on each side for 30 seconds, then remove from heat. Repeat this procedure six times, allowing the meat to rest in between, and reseason with a little sea salt each time. After the sixth time, let it rest for at least twenty minutes, it can be served cold.Slice it  across the grain into long, thin slices – it should be nice and pink, but warm all the way through.
Prepare a large dish with the salad leaves mix in the jalapeno pepper parsley and spring onions.Cover with the mixed tomatoes,the cooled pimentos and then arrange the slices of meat across the salad.Scatter a carpet of the mint and coriander leaves over the top and finish with some extra-virgin olive oil.
Prepare to collect the accolades.
Email Post