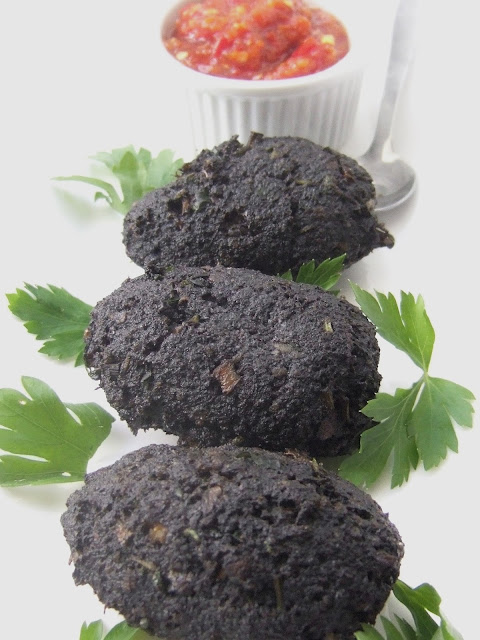 "Squid ink is the new black". Sounds like something trendy being posted on social media, but in fact risotto nero has been on the menu in Italy for quite a long time. The same goes for black spaghetti, pasta al nero.In Spain, arroz negro and black paella have long been standard fare. Squink risotto too may sound like the epitome of hip cuisine.So I thought I would venture down a slightly different avenue, taking another leaf out of Jose Avillez book and make some blackened fish cakes.This was my second venture into the culinary bairro do Jose Avillez.He uses bacalhau for his version ( "pastéis de bacalhau negros com maionese de alho" ) but bacalhau is not received well in this house, so I thought, being British, I would try pollock.And by the way, can someone clarify for me when, in Portuguese, is a fish cake a patanisca and when is it a pastel?
The Portuguese dictionary definition of pollock is.........
(O escamudo-negro (ou apenas escamudo) ou paloco é um peixe da família do bacalhau Pollachius virens.)

Paloco as pollock  is called in Portuguese is of the same family as cod.

Sometimes also called Saithe, Coalfish or Coley, this used to be a favourite cheap option for the English nation's cats before tinned pet food was developed. Now, however, top chefs and leading supermarkets have changed all that,and these related species are making a fashionable comeback as a great alternative to cod.It is brilliant in fish pies and cakes,and can also be eaten salted and smoked, much like Bacalhau.Hence my choice as an alternative to cod.The recipe stated for 4 people and I found it made 30 pataniscas.The reason my mix made a little bit more was that I found that I needed to add some bread crumbs to the original recipe as I found the mixture needed firming up a little in order to make it more workable when shaping the quenelles.In hindsight, the next time I make them I am going to spice them up a tad by adding some spice and chilli. They freeze beautifully too, so always useful to have some extra as back up. 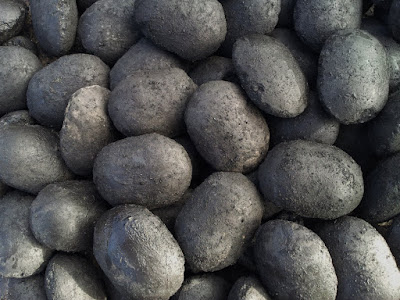 Coalite - Do not attempt to eat these and keep them away from children
Ironical that this fish was alternatively known as coal fish because these pataniscas (above) bore an uncanny resemblance to something called "coalite" that my parents used to burn on the fire when we were children.
Pataniscas de peixe negros
com aioli ou sriracha sauce
makes 30
250g Pollock fillets
200g potatoes
60g finely chopped onion
10g finely chopped parsley
20g (5 x 4g sachets) squid ink
4 eggs
olive oil
1 clove garlic
Bread crumbs as required
Flor de sal and pepper, nutmeg to taste
Sunflower oil for frying

Boil the unpeeled potatoes with a clove of garlic,salt and olive oil.Remove from the heat and when cool,mash.
Steep the pollock in some hot milk with some peppercorns and a bay leaf.When it almost comes to the boil, remove from the heat and leave with a lid on for 5 minutes then flake it.Add the flaked fish to the mashed potato, chopped onion parsley and stir in the squid ink.Add the eggs one by one and stir them into the mix.Season with salt, pepper and nutmeg.With the help of two dessert spoons make quenelles and fry them in a deep fryer at 180C.
Email Post