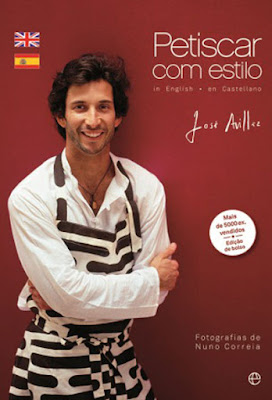 Read the press,ate in the restaurant,wowed by it,bought the book and this is how the story continues..........the unspoken problem with cookery books. How many recipes work?

At this time of year you want to be sure you have reliable recipes to hand.There is no time for failures in your seasonal preparations. Translating a chef's creation—intended to be cooked by professionals for hundreds of people per night—into something you can cook at home comes with its own unique set of challenges, from scaling down enormous quantities to sourcing obscure ingredients.
The prevalence of errors in cookbooks is the publishing world's dirty little secret. The problem is indicative of an industry mired in economic doldrums resorting to cost-cutting, guaranteeing less editing and testing before publication.Following a recent memorable lunch at Bairro do Avillez in Lisboa and having purchased one of his books, Petiscar com estilo (making snacks with style) I thought I would put this book, packed with exciting petiscos and tapas recipes, to the test.The main body of the recipes are given in Portuguese with a section in very small print at the back giving the translations of all the recipes into English.I selected my first recipe "Mini savoury leek egg custards" for its wittiness of putting a savoury interpretation on one of Portugal´s iconic sweet cakes.Having myself just put a new spin on Bacalhau a bras by using leeks instead of salt cod, I was rather enamoured witrh Avillez´s idea.It could be the perfect party petisco for Christmas, but also make a beautiful winter starter if dressed up with some winter leaves.
I opted to follow the Portuguese instructions to serve 4 and the method was spot on,the only problem being that the quantity the recipe actually made was for 12. No worries, they were simply delicious, but so rich we could only manage one each and as there were only two of us there was massive leftovers.God help anyone who opted for the English translation in which 500g of leeks became 1.1oz and 50g unsalted butter became .11oz? 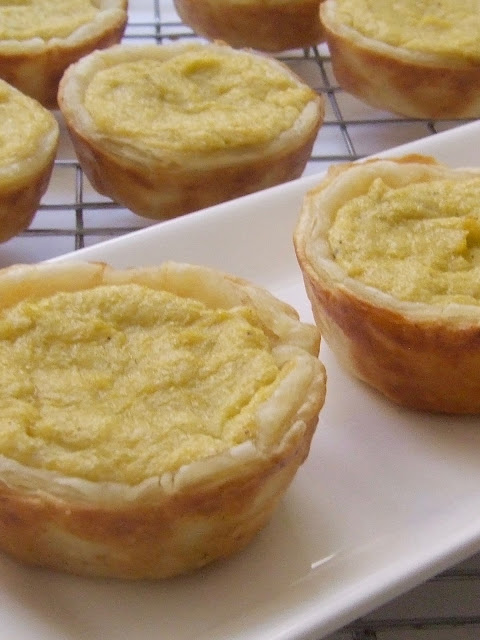 Mini savoury leek egg custards
(lost in translation)
(makes 12)
1.1oz leeks
salt and pepper
100ml cream
2 egg yolks
.11oz unsalted butter
Leeks egg custard
1.Melt a little butter in a deep pan
2.Add the leeks sliced into thin julienne.Season and add a little water,cover then let them stew.
3.when the leeks are cooked,add the cream and let it boil for 2 minutes.
4.Whizz everything in the blender,sieve and leave to cool.
5. When it is cold,add the egg yolks mixing well between each addition.Check the seasoning and reserve.
Puff pastry
1. Lay out pastry and brush it all over with melted butter at room temperature.Roll it out as if for a tart.Let it rest for 20 minutes in the refrigerator.
2 . Cut the roll into rough coin-size shapes and put them into the individual pie shapes on a pie tray.
3.Push the pastry to fit the shape.
4. Fill each pie with the filling (you can put some in the freezer for later)and put in a pre-heated oven at 220C until golden (approx. 8 minutes)


Well I wonder if if you made sense of that? How an earth can you butter a roll of pastry all over before you roll it out? then apparently the rolled out pastry magically forms itself back into a roll before you cut coin sized shapes out of it.My "coin" sized pieces were 8cms in diameter,I dont know any coin in history that has ever been that size. The recipe translations are also given in Castellano, dont lets even go there.

Having had hands on experience in industrial kitchens I know how recipes can become misinterpreted when put into print.What you are intending to achieve in the directions might call for completely different and more sophisticated equipment than your own kitchen is equipped with. The failure, from a recipe which clearly works beautifully in a restaurant, can be blamed in some quarters on the difference between professional and domestic ovens, whereas sometimes the error seems to be with the publishers. Some blame these errors on shrinking budgets, which mean that editors have less money to spend testing and checking recipes pre-publication.Many of the dessert recipes in the original River Café cookbook never worked in a domestic oven. Always needed much longer. But you learn to use your judgment.Any blog post on the subject of culinary disaster isn't complete without mention of the River Café chocolate nemesis.How many of us remember this dish which, despite rave reviews from diners in the west London restaurant, steadfastly refused to work for home cooks like myself, who famously produced something more like "a kind of cowpat" than the decadent dessert they were hoping for. The late Rose Gray's slightly unsatisfactory response was that "It's a recipe you need to make a couple of times before you get it right". I doubt many people attempted it more than once Rose: humiliation doesn't tend to whet the appetite for seconds.And what about that weeks budget of fresh eggs all ending up in the bin? On the contrary, Ottolenghi recipes are mostly conceived and thought through with a home kitchen at heart."How do home cooks cook? What would they want to cook?" and "are they something that home cooks can actually make?" That has always been the guiding force behind his recipes.Aside from not taking into consideration the need for an industrial grade blender to make that ultra creamy fish soup, it is not every home cook that has a gallon of fish stock to hand.
Abbreviations can be the curse of a recipe too. Tsp printed as Tbsp. Just one letter´s difference, but having the potential to reek catastrophic effect on a recipe.An extra zero on the grammage,250 instead of 25g,can cause an absolute Disaaaaaster darling!!!!Chefs are particular culprits because they´re simply not used to thinking in terms of recipes.I am culpable myself when cooking and writing up recipes,being vague in the extreme about the quantities and methods involved.It is so important for authors of cookery books to make it very doable for home cooks.Here´s hoping my next recipe attempt from this book wont need so much cross referencing and initiative.The result however was more than worth the effort and i shall most certainly be making more batches of these.Thank you Mr Avillez, I am sure the faults don´t lie with you.