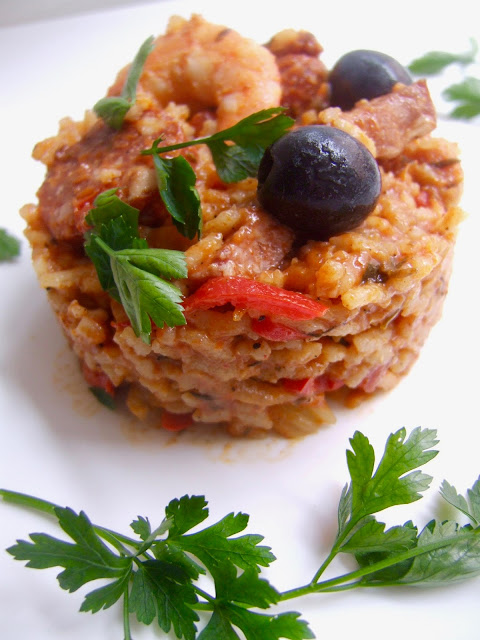 "Good bye Joe,me gotta go,me-oh-my-oh"..... Needless to say I won’t be going down to New Orleans for Mardi Gras and chances are most of you won’t be either. Neither will I be "picking guitar,filling fruit jars or being Gay-oh".I will most likely be staying home and tossing up one idea or another on the theme of pancakes.Others of you,I know, will have been throwing Oscar night parties and celebrating with popcorn on the sofa.But "Son-of-a-gun, we'll still have big fun" with some colourful Creole food this weekend.
Enter Jambalaya, a quintessential New Orleans classic. Jambalaya is a French word that means ‘jumbled’ or ‘mixed up’.Think of jambalaya as the love child of paella and risotto.There are two general kinds of jambalaya:  Creole and Cajun.  What’s the difference?  The main difference is tomatoes.Creole jambalaya, also called “red jambalaya” uses them, Cajun jambalaya does not.  Another difference is the order in which the ingredients are prepared.  But both utilize what’s referred to as the “holy trinity” – onion, celery, and bell pepper (usually green).this particular jambalaya is the Creole version.
An important element in this dish is the homemade Creole seasoning. The flavour will be fresher, bolder, better.  If you have the herbs and spices on hand to make it, your taste buds will thank you. 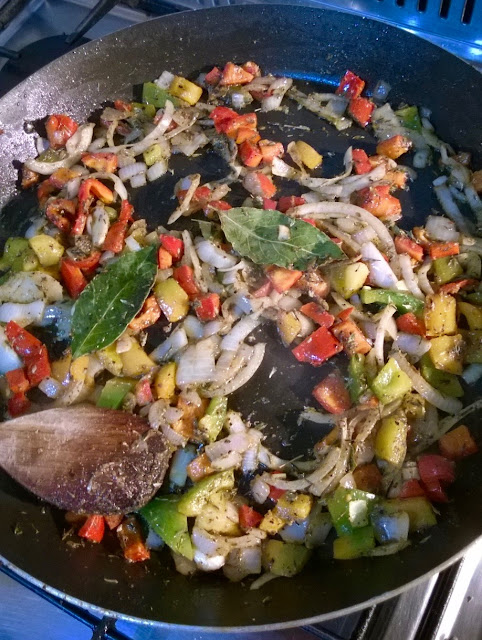 Creole Jambalaya
serves 4-6
Hello, New Orleans! Mark Twain once said, "New Orleans food is as delicious as the less criminal forms of sin." Speaking nutritionally, meat-heavy jambalaya is a misdemeanour. But toss in chicken instead of smoked sausage and pick a leaner cut of bacon — keep the prawns, of course — and you can dine with a clear conscience.

1 red pepper deseeded and chopped
1 red chilli deseeded and finely sliced
225g tin chopped tomatoes
6 tbsp tomato purée
2 bay leaves crumbled
500g Malandrinho or risotto rice
1.5 litres chicken stock
Heat the oil in a large paella pan.Season the chicken,if using and fry with or without the sausages until golden brown and the oil is being coloured from the chouriço.remove from the pan and set aside.Fry the prawns until coloured, and set aside.
In the same pan melt the butter and add make a sofrito with the "holy trinity" ( onion, celery, and green pepper),as they soften add the creole seasoning, garlic, red pepper and chilli.Keep frying until all the vegetables are nicely coloured.Add the meat mixture and stir well to mix.Add the chopped tomatoes and tomato purée.Stir well again to amalgamate.Stir in the rice until transparent,about two minutes.Pour over the stock and bay leaves.Bring to the boil and cover tightly,simmering for 15 minutes or until the rice is tender but still separate.Add more liquid from time to time if necessary.Turn off the heat stir in the reserved prawns and leave for about 5 minutes or until all the liquid has been absorbed.Serve garnished with some chopped parsley.
"Good bye Joe,me gotta go,me-oh-my-oh".....
Email Post