Who´s old enough to remember this ground breaking biscuit from the 1950s ?...... A little bit retro and whole lot more delicious, inspired by memories of the school tuck shop I set out to see whether I could recreate the legendary wagon wheel biscuit, and give them the taste I remember with an echo of a distant age of giant biscuits and the history that comes with them. There once was a mighty biscuit baron called Garfield Weston. An entrepreneurial Canadian, he made a fortune out of supplying biscuits to the forces during the war and had a facility in Slough. Mr Weston had three sons. One son inherited the UK business, one had the Canadian, and the other Weston got Australia. Which is why in each country one can find the Wagon Wheel.Reputed to be the brain child of Garry Weston, the UK son, they were originally sold in the UK as Weston's Wagon Wheels.

"A taste for adventure."

For those of you not up to speed with the wagon wheel,they are a chocolate-coated biscuit and marshmallow sandwich sold with packaging that capitalized on the Wild West,which with programmes like Wagon Train, Rawhide, Bonanza, The Lone Ranger and The Virginian were popular in the media at the time.There is a top and bottom biscuit layer lined with raspberry or strawberry jam(Australian version only), with marshmallow in the middle holding them together, then the whole thing is coated in chocolate. The soft biscuit layers have a bit of crunch to them. The centre is white. 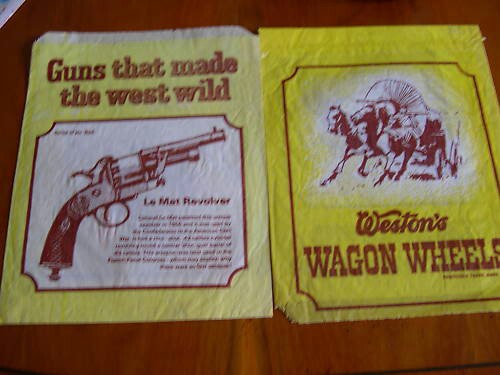 The packaging I remember, originally sold in the UK as Weston's Wagon Wheels.

During the 1960s the slogan in Australia was "It's more than a biscuit, it's a mighty big snack!" "Eat the Wagon Wheel!" was the catchphrase of a campaign where viewers were informed of what items were typically available as snacks in countries where Wagon Wheels were not available. The voice over would then ask which you would rather eat. Then the reply would come from, for instance, one of the pickled herrings on offer, "Eat the Wagon Wheel!" This giant marshmallow and jam-filled biscuit  I turned out was so much bigger than the Wagon Wheels I remember from my childhood.'Yes, yes, but what does it taste like?' I tend to hear you cry, waiting for a review. Well its most definitely a Wagon Wheel. All the classic components are there, the chocolate flavoured coating, which appeared a bit darker than the original I remembered, more cocoa perhaps?  However there is a definite difference and I think this comes mainly from the jam and its placement. In my Wagon Wheel  it is applied directly to the bottom of both biscuits. The result is definitely a challenge for the palate. I even believed at one point that I detected a Raspberry pip, even though I knew that this was impossible, a cunning fantasy woven for me by antipodean biscuit makers.
OUR TASTING PANEL SAID
Bearing in mind they were comparing something from memory.The biscuit was spot on but should be thinner.Authenticity~wise there should be no jam, this is something that should be left to the Australians.The mallow was too squidgy.This was my fault. In attempting home made marshmallow, which failed miserably, I would suggest to anyone attempting to make home made wagon wheels that you use a commercial brand of marsh mallows and melt them down.I have since found a recipe (below) which is very different to the one I used and potentially seems pretty sound if you have patience.My chocolate covering, all agreed, was delicious but once again for authenticity it should be milk chocolate.My wagon wheels weighed in at nearly double the weight (5oz) of the original specification(3.5oz)!!!.I kept to the original diameter of 79mm.
Home made wagon wheels
makes 6
FOR THE MARSH MALLOW FILLING (revised)
140 g pure icing sugar
140 g cornflour
400 g caster sugar
1 tablespoon liquid glucose
2 tablespoons powdered gelatine
2 egg whites
75 g cornflour
Sift the icing sugar and cornflour into a bowl. Grease and line a 4 cm-deep, 18 cm x 25 cm ceramic baking tray. Dust the inside of the pan with a generous amount of the icing sugar mix, setting the reminder aside for later. In a small bowl sprinkle the gelatine over 200 ml cold water to allow it to dissolve and soften.
Combine the caster sugar, glucose and 200 ml water in a small saucepan over a low heat. Stir constantly, until the sugar completely dissolves. Increase the heat to medium, bring the mix to the boil and cook until it reaches 120°C on a sugar thermometer.
Meanwhile, while the sugar syrup is cooking, start beating the egg whites. In the bowl of an electric mixer, beat the whites on low until they become frothy. Increase the speed to high and continue to beat until they're thick and fluffy.
As soon as the sugar syrup reaches 120°C, and without stopping the motor, slowly pour the syrup into the egg whites in a steady stream. Continue to beat on high.
Pour the gelatine and water into the saucepan used to make the sugar syrup, scraping the bowl to ensure there's none of the mix left behind. Place over a very low heat and stir until the gelatine is completely dissolved. Due to the residual heat left in the saucepan this should only take a few moments. Without stopping the motor, pour the gelatine mixture into the whites. Continue to whip for eight minutes or until the mixture thickens and becomes glossy. Scrape the mixture into the prepared pan. Smooth the top with a wet palette knife, then set aside and allow to dry for three to six hours, uncovered. If you're kitchen is too warm, you can also chill the mix in the fridge for 1 hour, then allow it to sit, uncovered for an extra hour. When done it should feel dry to the touch.Once set,cut out six 8cm discs with a biscuit cutter.

FOR THE BISCUITS
225g butter
75g caster sugar
1 egg yolk
1 tbsp golden syrup or maple syrup
210g plain flour
Cream together the butter and sugar and then add the egg yolk and syrup.Fold in the flour and mix to a smooth dough.Refrigerate for 30 minutes.
Roll out to 2mm thick.Cut out 12 x 8cm discs,allowing two per portion,and bake for 10 to 15 minutes until golden.allow to cool.

FOR THE CHOCOLATE TOPPING
100g good quality plain or ideally milk chocolate
150ml double cream
50g butter
Melt the chocolate with the cream in a bain - marie over simmering water.Once melted,add the butter and stir in.Remove from the heat to prevent the butter from becoming too liquid.The butter should have melted and emulsified into the chocolate mixture.If the mixture is too thin leave to cool to thicken slightly.

TO ASSEMBLE
Spread some jam (Australian version) fairly generously over 6 biscuits.Sit a marshmallow disc on each then spread some more jam on top.Finish with another biscuit to complete the "sandwich".
For a perfect chocolate finish,spoon the chocolate mixture on in stages.First sit the biscuits on a wire rack and set over abaking tray or plate and spoon some of the chocolate topping over to cover completely Refrigerate for 15 to 20 minutes until set.Remove and turn the biscuits upside down on the rack.Spoon more of the chocolate over the biscuits to cover.Refrigerate again until set.Remove and spoon over any remaining chocolate(you might need to re-use some of the topping from the tray)for an even more luscious finish.