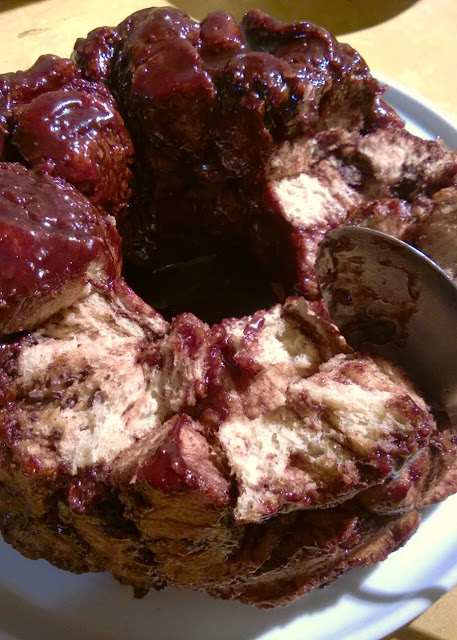 One of the first nursery rhymes I remember learning was "Hot cross buns!Hot cross buns!One-a-penny,two-a-penny, Hot cross buns!" Well what about the the bundt?
I seem to be seeing a lot of bundt cakes across the net of late, and maybe its because its Easter but I have a feeling that these old school cakes are making a very welcome come back.
There is no set Bundt cake recipe, so the cake is rather identified by its shape. To put it simply, a big, beautiful doughnut with ridged or fluted edges. These cakes can incorporate so many different flavours , and range from a simple sponge to chocolate or orange cakes, to the more traditional bundts, made at Easter or Christmas, that incorporate nuts spices and fruit into them.Well, after the abstinence of Lent, Easter marks the start of spring, the end of self-restraint, and I cant resist being seduced by dark chocolate.After the hardship of my first month of trying to lower my cholesterol I feel I have had forty days and forty nights of lenten punishment.ENOUGH I say, so lets dust off our mixing spoons, man our ovens and have our eggs at the ready.There is no doubt that the traditional Hot Cross Buns will remain popular for  Easter, but the appeal of non-traditional hot cross buns flavoured with dark, milk and white chocolate is on the rise.First I needed some new inspiration for hot cross buns and other Easter breads.
I love sticky buns! and lets face it we dont have them very often, buts its Easter and whats not to like about chocolate, cinnamon, cardamom or orange sticky pull them apart buns.I have been tempted by an Ottolenghi recipe for monkey bread,but without some monkey business I can not eat this cake and keep my LDL level in check. I know I shouldn´t monkey around with recipes but I really wanted to see if I could make this more cholesterol friendly without losing a pascal offering of exciting sweet flavour combinations. 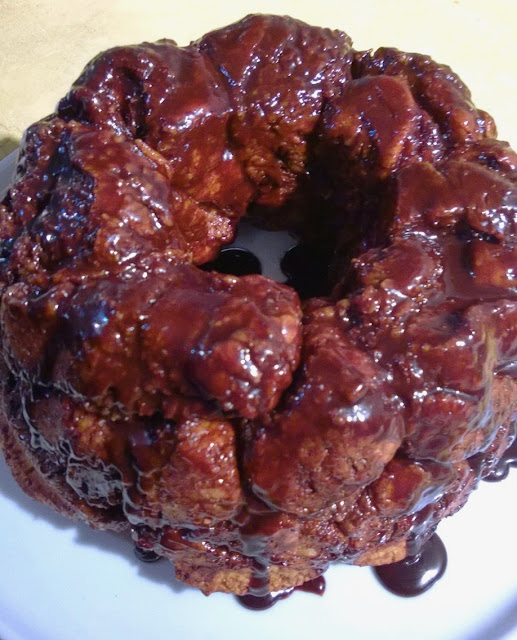 gooodness gracious great balls of unctuousnesss
Chocolate orange monkey bread
Monkey bread is an enriched sweet bread made with lots of pieces of soft, sugar- or syrup-coated dough all stuck together, and you eat it by tearing apart the warm, gooey, soft bread, much as a monkey might.  The loaf will keep for two days, but it needs reheating before serving.I am giving the recipe in its original form and also my lower cholesterol version.The method prep time and cooking time is the same for both versions.

1 cup almond milk
90ml freshly squeezed orange juice
I soup spoon grated orange zest
1/4 cup honey
2 tbsp mild olive oil, plus extra, for greasing tin
1 tsp vanilla essence
7g sachet fast-action dried yeast
380g plain flour, plus a little extra for dusting
180g wholewheat flour
280g plain flour
¾ tsp salt
100g dark chocolate chips
For the sauce
8 tbsp olive oil
120g molasses
Finely grated zest of 1 large orange
1/4 cup honey
2 tbsp Dutch processed cocoa powder
Gently warm the first five ingredients in a small saucepan on a medium heat for a minute or two, until the butter is almost melted and the milk is tepid – take care not to overheat the mixture, otherwise you’ll kill the yeast. Turn off the heat, then whisk in the yeast and set aside for 15 minutes, until slightly frothy.
Put both flours and the salt in the bowl of a free-standing mixer with the dough hook in place, add the yeast mixture and knead for three minutes; start on the lowest speed and increase to medium, pausing every now and then to scrape down the sides so you incorporate all the flour. Transfer the dough to a lightly floured work surface and spread it out slightly. Scatter the chocolate chips in the middle, fold over the dough to enclose them, then knead for five minutes by hand, until it is springy and soft, and the chocolate is evenly distributed. Put the dough in a large floured bowl, cover with cling-film and leave in a warm spot for 45 minutes, until it has almost doubled in size. Meanwhile, brush the inside of a large bundt tin (24cm in diameter at the top, 20cm at the bottom, 8cm high) with the melted butter.
For the sauce, put all the ingredients in a small saucepan on a medium heat and cook, stirring frequently, for three to four minutes, until the butter, sugar and syrup have melted together into a thick, rich sauce. 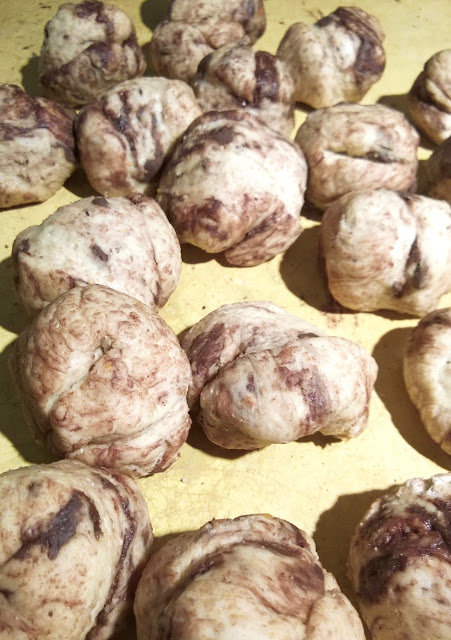 Roll the dough into a long sausage, then cut into 24 equal pieces. Roll each piece into a ball, then drop them one by one into the sauce, until roughly coated all over. Put the coated balls of dough in the bundt tin, building up the layers in the tin as you go. When all the dough is coated, pour any remaining sauce over the contents of the tin, then cover and leave in a warm spot for 45 minutes, until nearly doubled in size again.
Heat the oven to 160C/320F/gas 2½. Bake the monkey bread for 35 minutes, until well risen and golden brown, then leave to cool for five minutes. Put a large plate on top of the tin and invert the bread on to the plate. Lift off the tin, leave the bread to rest and cool for 10 minutes more, then serve warm.
Email Post