Almond and polenta sponge cake with yuzu and cherry drizzle 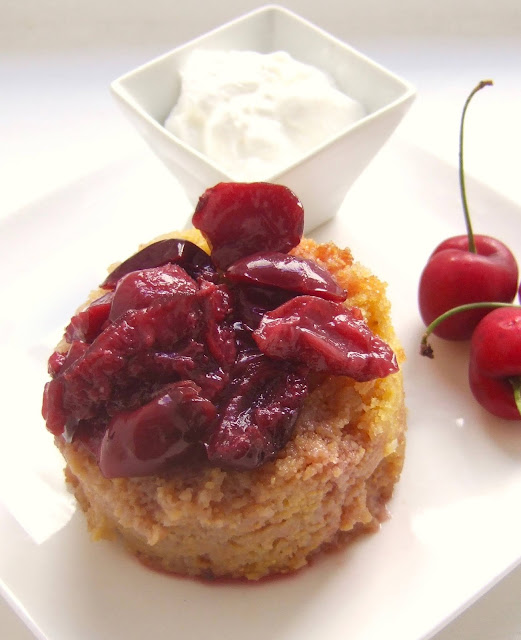 Add a touch of Japanese flavour to a Portuguese favourite.Moist and firm, Castella (カステラ Kasutera) cake was brought to Japan by the Portuguese in the 16th century, and Japan has been enjoying it ever since.Traditionally Castella cakes are baked in a wooden hako (hako means box) and are a specialty of Nagasaki.Unlike their Portuguese counterparts Japanese cakes aren't usually overly sweet, but I have made this a sweet cake by flavouring it with honey. It is said that Portuguese traders brought over the Pão de Castela, meaning "bread from Castile"(Portuguese sponge cake) and it was taken on by the only port open to trading at that time, Nagasaki. It became essentially a rather Western sponge cake. It is a beautiful cake in its simplicity and only calls on just four ingredients: eggs, sugar, flour and honey.I decided to make a drizzle cake inspired by but not entirely true to the castela cake, and put some Japanese flavours into something that was originally Portuguese, Macha green tea and Yuzu.Yuzu is a refreshing citrus fruit whose juice and rind is often used in Japanese and other varieties of East Asian cooking.Its flavour, for those familiar to it, is not dissimilar to Elderflower. Sponge cake is a basic pastry tool to have in one´s repertoire, a light cake to soak up all those delicious juices from our luscious fresh fruit of the spring and summer season. It's versatility means it can also be used to create trifles, charlottes, simple jam cakes or tiramisu. So it's a good versatile cake to master. Yet a lot of bakers aren't very comfortable working with genoise or sponge cake recipes because they can sometimes be fussy to produce. However, this recipe is one of the easiest cakes I've ever made. With just a few ingredients and the substitution of olive oil for butter, it assembles in no time and bakes off beautifully with no collapsing and any excessive dryness is counter balanced by the drizzle.

I have taken a bit of a different approach altogether to both ingredients and method. Most sponge cakes call for cake flour for a very delicate crumb, and in the case of the castela sponge bread flour and turbinado sugar is used( more on that story later Kirsty).My  cake uses a combination of almonds and polenta, which  helped to keep it sturdy.I added the olive  slowly, drizzled into the mixer rather than the classic method of folding in the fat at the very end. The cake bakes in two stages.It is baked for 35 minutes, then the heat is lowered to 160C/gas mark 2 and baked for a further 35-40 minutes.
Since we're now luxuriating in the soft fruit season, I thought it would be fun to pair this cake with a simple honey and vanilla cherry compote and creme fraiche. Apricots,fresh strawberries, raspberries, blackberries, peaches or any fresh fruit would also be perfect. Just macerate the fruit in sugar to produce some delicious juices,which are used to drizzle the cake with.
I have taken artistic licence to call it a "sponge" cake because it's  imbibed with a liquid. For the purpose of the photograph, I cut circular slices from the cake  so you can see the beautiful crumb, but be sure to serve the cake with plenty more compote syrup and creme fraiche.

Preheat the oven to 180C/gas mark 4.Grease the base and sides of a loaf pan, measuring 20cm in length,line the bottom with baking parchment.In a processor beat the eggs and caster sugar together till pale and fluffy.Mix in the ground almonds polenta and baking powder.Blend thoroughly then add the lemon zest and through the funnel stream in the olive oil followed by the cordial.Make sure everything is well combined.spoon the batter into the prepared loaf pan. Bake for 35 minutes then lower the temperature to 160C and continue baking for a further 35 to 40 minutes until firm.While the cake is cooking halve and stone the cherries.In a small pan warm through the honey and yuzu cordial.Add the cherries and simmer for about 10 minutes until the fruit has given off some of its juice and the cherries have made a compote.Strain the juice into another pan and reduce to a syrup.When the cake is ready, remove from the oven, then pierce all over with a metal skewer. Spoon some of the syrup from the cherries over the surface of the cake so it runs down through the holes into the crumb of the cake, then leave to cool.Remove the cake from its tin, then serve with the cherry compote creme fraiche or Greek yoghurt and some fresh cherries.