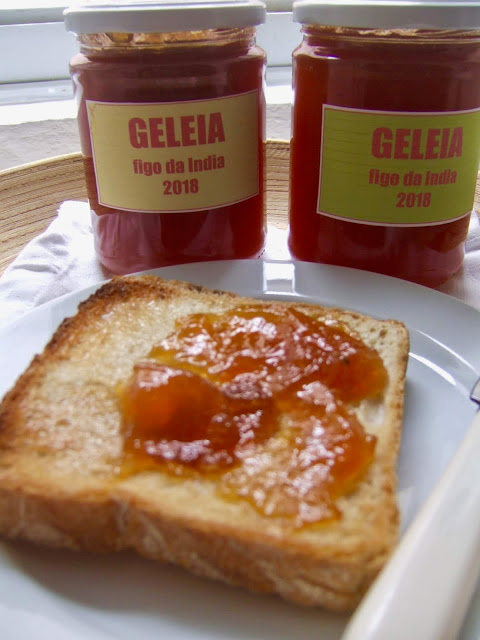 Home made Indian fig jelly spread on toast for breakfast....YUMMMMMM

Followers in colder climate zones will have to excuse my temporary bout of Opuntia (Prickly Pear cactus ) mania, but I’ve had a hell of a lot of cactus fruit to deal with this last couple of weeks.I´ve juiced and I´ve jammed and I´ve jellied and next year I’m going to take a crack at creating some other preserves,Indian fig gazpacho, fruit pies, a jelly topping for cheesecake, cocktails, licores —and who knows? Que delícia. 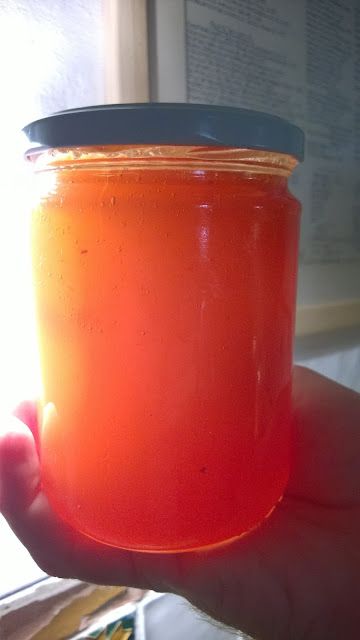 My love affair with the opuntia began one Saturday afternoon in September when I was shopping, and local producer Nelson Ventura from Herdade de Malhada,Alcoutim was promoting the fruit in our local supermarket.Having got into conversation with Nelson,I wrote an initial blog and am now finding out further information about this unusual and intriguing fruit.He very kindly dropped off a box with six kilos of them for casa rosada to try out on our guests.Thank you for that O senhor,muito gentil de sua parte.Opinions differed from o nobre para o delicioso, the sublime to the delicious,but pip content came up high on the points of view list.I made delicious juice which I blended with pomegranate to up the exotic content and then I came up with an exotic jam with just a hint of pomegranate which will be just one new addition to the casa rosada breakfast table. My "romance" with the prickly pear is turning out to be a long,and well, fruitful one.

Geleia Figo da India
Unlike many other cactus jelly recipes on the internet that I have tried unsuccessfully, this one works. The proof is pictured above.
2 1/2 cups prickly pear cactus juice
1/2 cup lemon juice
5 cups sugar
1 box of powdered pectin (18 teaspoons-note that not all pectin brands contain the same amount in a box, so measure it out to make sure)


Wash Peel and scoop out flesh from the fruit.Blitz the fruit in a processor or with astick blender in a cylinder. Use a fine colander or sieve to strain liquid from the juiced fruit.
Combine strained fruit juice and lemon juice and cook over medium heat until solution is boiling.  Once boiling add sugar and pectin and stir constantly.Continue to keep mixture at a rolling boil for ten minutes,or until jell point is reached then remove pan from heat.  If canning jelly, ladle into sterilized jars.Prickly pear jelly may take up to two weeks to gel inside the jars.  If using for fresh jelly, cool jelly and store covered in the refrigerator for up to one month.
Email Post