The "Bombay burger",potato in a bun 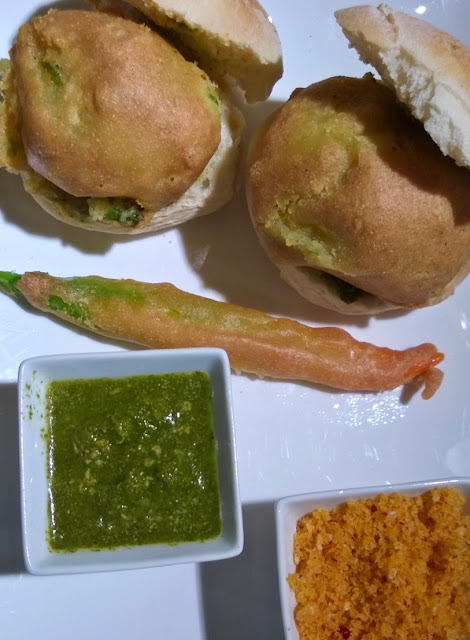 The Bombay burger with all the trimmings
Alternatively spelt Vada Pao, Wada Pav, or Wada Pao, is a vegetarian fast food dish native to the Indian state of MaharashtraIt.The Vada Pav is my new go to comfort food.
Spherical patties, made with mashed potato mixed with masala spices, green chilli and, occasionally finely chopped raw onion,deep fried in hot oil and then sandwiched in a wodgy bun called a pav, and slathered with some green chilli-coriander chutney with fried green chillies  and dried garlic chutney,spicy lasun khobra on the side.What´s not to like.A perfect contrast of tastes and textures: the chewy blandness of the pav acting as a perfect foil to the piquant crunchiness of the vada.The vada pav is a delectable carb overload – that instant energy boost that we all so often need.
This snappy little snack is synonymous with the city of Mumbai. The dish is believed to have been invented in 1966 by a Mumbaikar, Ashok Vaidya, who opened the first vada pav stall opposite the Dadar train station, through which hundreds of thousands of workers – often in need of a quick, inexpensive snack – passed every day on their way to the textile mills in suburbs such as Parel and Worli.Eat you hearts out slum dog millionaires.
Ironically, both of vada pav’s main components – the potato and the bun – are European imports, brought into India once again,yes you´ve guessed whats next, by the Portuguese around the 17th Century. The only key ingredient originally belonging to the region – or even India – in the dish, is the besan (chickpea flour) in which the potato mix is coated before being deep-fried.Macdonalds´tried to emulate it with their McAloo Tikki burger but it could not be more different from the beloved vada pav. Not only does it not match the spice levels of the home-grown vada pav, but it also leaves little room for artistry. The flavour of vada pav depends entirely upon the whims of the cook, with every vendor claiming to have a secret recipe or a special ingredient that makes his vada pav unique: a pinch of ground masala, or a topping of choora (the crispy crumbs left at the bottom of the frying pan) along with the quality of his vada. 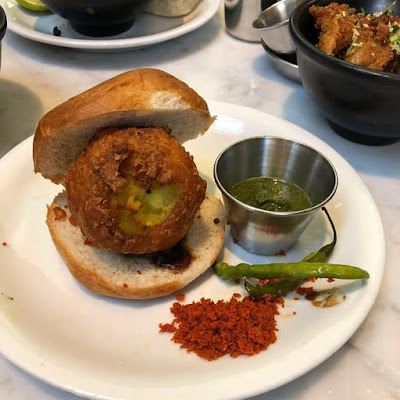 Calling it the ‘Indian burger’ immediately gave it an aspirational value and licence to be copied the world over.Schezwan vada pav  and the Nacho vada pav (topped with tortilla chips,inspired by Mexican cuisine)).
Beats a soggy sandwich on the train home from work, I´d say?

FOR BATTER
1 to 1.25 cups gram ( chickpea flour )
pinch of asafoetida
1/8 tsp turmeric powder
pinch baking soda
1/2 cup water or as much as required
salt to taste

FOR THE GREEN CHUTNEY
1 cup coriander leaves,chopped
2 garlic cloves,chopped
2 to 3 drops of lemon juice
2-3 green chillies,chopped
salt to taste
Grind all the ingredients with a little water till smooth.
Avoid making a watery chutney.

FOR THE DRY GARLIC CHUTNEY
This spicy and piquant dry chutney is made from garlic,dessicated coconut,sesame seeds and red chilli powder.It is also called lasun Khobra chutney.Everything is mixed and then pounded in a pestle and mortar to a coarse dry mixture.Both the flavours of dessicated coconut and garlic is felt distinctly in this chutney.The spice and heat comes from red chilli powder.I used my own ground piri piri to give a bright deep red clour to the chutney

1 tsp peanut or sunflower oil
20 to 24 garlic cloves or 1 tbsp small garlic cloves
2 tsp white sesame seeds
1/2 cup dessicated coconut
1 tbsp dried red chilli powder,or add as required
salt to taste
Pound all the ingredients in a pestle and mortar.Next in a spice grinder,grind the ingredients in intervals of 4 to 5 seconds and stop. Do not grind at a stretch as then the oil will be released from the coconut and sesame seeds.You can use the pulse otion on your grinder to achieve this.Grind to a coarse or semi-fine mixture.Spoon the dry garlic chutney into asmall glass jar or bowl.Cover tightly and refrigerate.

MAKING BATATA VADAS
Boil 2 large potatoes about 350grams till they are completely cooked.
Peel  and mash them with a fork in a bowl.
Heat 2 to 3 tsp oil in a small pan.Add 1/2 tsp mustard seeds and crackle them.Add 7 to 8 curry leaves and asafoetida.Stir and sauté for about 5 seconds.
Add 6  to 7 garlic and 1 to 2 green chillies,which have been crushed in apestle and mortar.Add 1/8 tsp turmeric powder.Stir until the raw aroma of garlic goes away.
Pour this seasoning into the mashed potatoes
Add 1 to 2 tbsp chopped coriander and some salt.
Mix everything well and then make small to medium balls from the mashed potato mixture.Flatten these balls a bit.Cover and keep aside.
In another bowl,make a smooth batter with the gram flour, turmeric powder,asafoetida,baking soda,salt and 1/2 cup of water.The batter should not be too thick or thin.If the batter becomes thin,add 1 to 2 tbsp gram flour.if the batter becomes too thick,add 1 t 2 tbsp water.Keep aside
Heat oil for deep frying
Dip the slightly flattened potato balls in the batter and coat them evenly.
Gently drop the batter coated balls in medium hot oil.
Depending on the size of the fryer you can add more or less of the vadas while frying.
Deep fry the vadas until evenly golden.
Drain them on kitchen paper.

TO ASSEMBLE
slice the pav or bun without breaking it into two parts and keep aside.
spread the green chutney on the sliced bun.Sprinkle some dry garlic chutney and then place the hot batata vada sandwiched between the bread slices.Serve immediately or else the braed will become soggy.You can also serve some fried green chillies and more of both the chutneys with it.Alter the amount of chutneys you spread in the braed according to your taste and liking.
Email Post