From silver screen to silver spoon,adults only

Popcorn is finally out of the cinema and taking mainstage, wowing gourmet adult audiences around the world.These retired kernels in our storecupboards are popping up on smart restaurant menus all over the place,urging us to get creative and have fun.
It's easy to go overboard popping popcorn for a netflix movie night in, or trying to create the futuristic nostalgia of "drive-in saturday", but instead of tossing leftovers in the bin,try "a crash course for the ravers" and transform them into pesto or create a side for some soya dipped chicken skewers,even caramelise them and serve them over chocolate cake with ice cream.
Popcorn is everyone’s favourite snack, but it also makes a versatile ingredient in the kitchen. When you get inventive, popcorn can go way beyond the overpriced cardboard tub you buy in your local multiplex. Every salad needs a good balance of textures, and popcorn in a salad gives you a nice crunch. Be careful though not to sop on the salad dressing so the kernels get soggy(nothing worse than a soggy kernel).But here’s where you can get really creative – first you can try using crushed up popcorn as a substitute for bread crumbs (think of a piece of grilled marinated chicken or fish that’s coated in a popcorn crumb crust – yum!)
Another idea for a side dish for your main course is to make  some popcorn purée – it’s just like a polenta, but with a cheesy popcorn twist that goes beautifuly with both fish and meat.Transforming what is normally a salty buttery snack into something delicious and unexpected is an idea that just has to be snapped up.Here are three grown-up takes on popcorn.....

Popcorn chicken skewers with soya dipping sauce
Serves 8
3 tbsp sunflower oil
3/4 cup(150g) popcorn kernels
1/2 cup (120ml) soya sauce
1/2 cup(120ml) mirin (sweet rice wine)
1/2 cup (170g))honey
600g boneless,skinless chicken thighs or breast,
cut into 2 inch 1/4  inch(5cm x 6mm) pieces
18 bamboo skewers,soaked in water for at least 20 minutes
In a large pan,heat the oil over a medium heat.just as the oil begins to smoke,add the popcorn kernels and quickly cover with a lid.Vigorously shake the pan while the popcorn begins to pop.Once the popping begins to subside,remove from the heat and continue shaking for about a minute.Remove the lid and let cool.Discard any unpopped kernels.transfer to a food processor and pulse until crushed into medium pieces.
in a medium bowl,whisk together the soya sauce,mirin,and honey.Add the chicken pieces
and toss to coat.Refrigerate for about 20 minutes.
remove the chicken from the marinade and transfer thew marinade to a small saucepan.Heat the marinade over a low heat and cook to reduce by half,until thick enough to coat the chicken,about 6 minutes.
Meanwhile,thread 6 pieces of chicken onto each skewer.On a grill(griddle) pan over a medium high heat,sear the skewers,turning occasionally and brushing with half the reduced marinade,until browned and cooked through,but not dry,about 10 minutes.
To serve,arrange the skewers on a serving dish and serve with bowls of the remaining sauce and crushed popcorn for dipping. 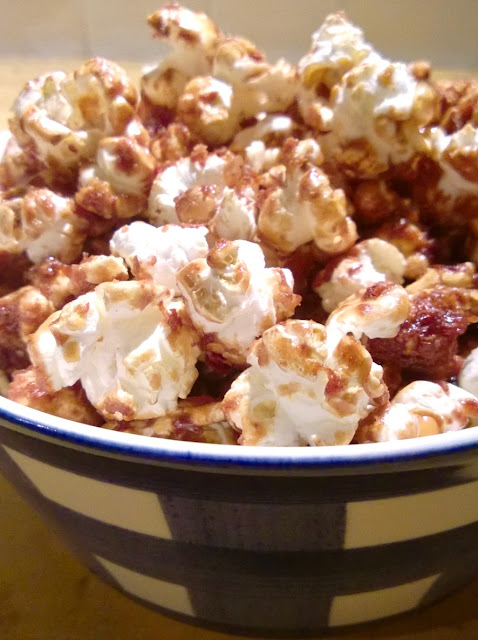 Heat the oven to 130C (120C fan)/285F/gas 1and line a large oven tray with baking paper.
Put the oil in a large saucepan for which you have a lid, put on a medium heat and, once it’s quite hot, add the popcorn kernels and cover. Leave all the corn to pop, shaking the pan frequently, about five to six minutes, then tip into a large bowl and transfer about a third of it into a second bowl.
Melt the butter in a medium saucepan on a medium-high heat, then add the sugar and cook, stirring, for two to three minutes, or until foamy and bubbling. Add the salt, baking powder, chilli and sriracha, and stir vigorously to combine; the mixture will bubble profusely, so take care. Turn off the heat and stir in the shrimp.
Working quickly now, pour the caramel over the larger bowl of popcorn and mix to coat. Transfer to the prepared baking tray, spreading out the coated popcorn as much as possible, then bake for an hour, stirring two or three times, or until the popcorn is no longer sticky. Remove, then leave to dry out and cool completely – about 15 minutes.
To serve, transfer the spiced popcorn to a large bowl, stir in the reserved third of unspiced popcorn and add an extra sprinkling of flaked salt, if you like. 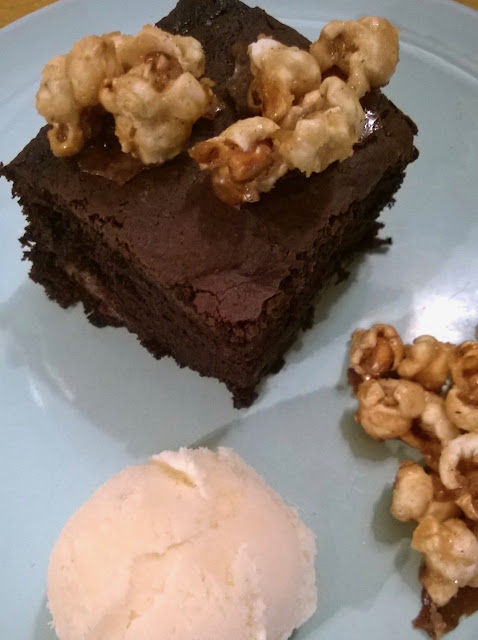 In a heatproof bowl set over a pan of simmering water,melt the butter and the chocolate.transfer to a large bowl and add the sugar.With an electric mixer,beat on medium-high until homogenized.Add the eggs and continue beating until combined.Stir in half the flour mixture,then half the milk,alternating between the two until combined.fold in the pears.transfer to the prepared pan and bake until a skewer inserted into the centre of the cake comes out clean,about 45 minutes.Let cool in the pan on a wire rack for 30 minutes.
For the caramelized popcorn

1 tbsp sunflower oil
1/4 cup (50g) popcorn kernels
2 tbsp granulated sugar
2 tablespoons heavy whipping cream
25g butter
pinch of flor de sal
In a medium pan,warm the oil over a medium heat.add the popcorn kernels and quickly cover with a lid.once the popcorn begins to pop,vigorously shake the pan.Once the popping begins to subside,remove from the heat and continue shaking for about a minute.Remove the lid and let cool.Discard any unpopped kernels.Spread out on a baking tray lined with parchment paper.in a small pan.heat the sugar over a medium heat until melted and golden brown,about 2 minutes.add the cream,butter,and salt and stir until combined.Pour the caramel over the popcorn and let sit until hardened,Break into chunks.
Mascarpone ice cream
Makes about 1 litre

450 ml whole milk
1 Vanilla pod, slit open length ways
Yolks of 5 large free range eggs
125g caster sugar
250 ml double cream
250 g mascarpone
Heat the milk with the vanilla pod until almost boiling, remove from the heat, stir well and leave to infuse for 30 minutes. Whisk the egg yolks and sugar together until pale and creamy in a roomy bowl. Slowly pour on the milk, stirring constantly. Lift out the vanilla pod and return the mixture to the pan. Stir constantly over a low heat until the custard is thick enough to coat the back of a wooden spoon. It must not boil or it will curdle.
Remove from the heat, stir in the cream and leave to cool completely. When cold, using an electric whisk, whisk the custard into the mascarpone then chill. Freeze in a freezer box and freeze firm, stirring once after 2 hours and twice more at hourly intervals. Transfer the ice cream to the fridge at least half an hour before serving.