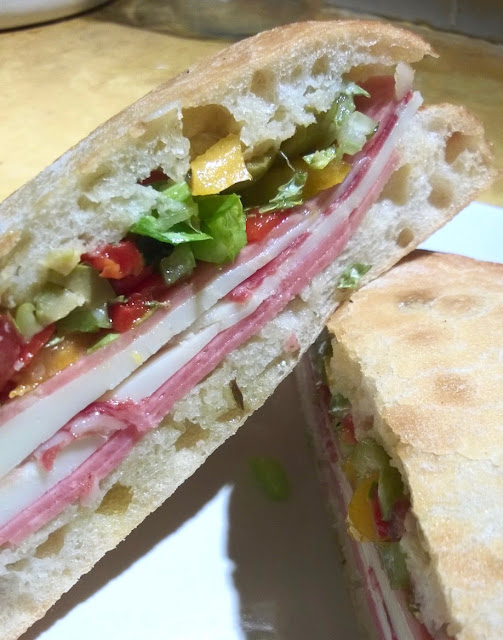 Where did the word “carnival” come from?
Hundred and hundreds of years ago, the followers of the Catholic religion in Italy started the tradition of holding a wild costume festival right before the first day of Lent. Because Catholics are not supposed to eat meat during Lent, they called their festival, carnevale — which means “to put away the meat.” As time passed, carnivals in Italy became quite famous; and in fact the practice spread to France, Spain, and all the Catholic countries in Europe. Then as the French, Spanish, and Portuguese began to take control of the Americas and other parts of the world, they brought with them their tradition of celebrating carnival.
So without further ado and before we put away the meat,lets make the most indulgent sandwich I know,the muffaletta,the origin of which came from Italian immigrants in New Orleans.The muffuletta sandwich was allegedly created in 1906 at Central Grocery Co. on Decatur Street, New Orleans, Louisiana, USA, by its owner Salvatore Lupo.
The holiday of Mardi Gras is celebrated in all of Louisiana, including the city of New Orleans. Celebrations are concentrated for about two weeks before and through Shrove Tuesday, the day before Ash Wednesday. Usually there is one major parade each day; many days have several large parades and therefore plenty of chances to indulge in a mouthful of muffaletta.
This is not for the calorie conscious. It is, however,for people who embrace bold flavours.
The combination of the salty meats, the smoked cheese, the strong olive oil flavour and the crunch of the olive salad makes this the type of snack anyone – your friends, your gran or even your most difficult fussy eater friend Jennifer who likes only tinned ravioli could not fail to enjoy. 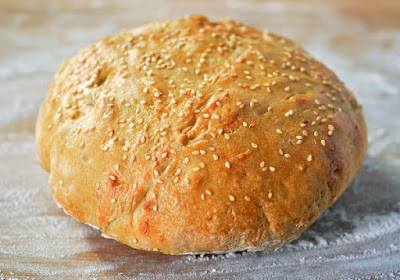 One guideline;when it comes to making your own muffaletta the choice of bread is crucial. You’ll be hard pressed to find this outside of Louisiana.The muffaletta is partly defined by its bread, so when you swap out this element, it becomes more of a hybrid muffaletta/Italian sub.The density has to withstand the olive oil and olive salad without getting soggy.
Muffaletta bread is essentially a round Italian style dense loaf and you can certainly substitute a good quality Italian bread from a bakery when making this sandwich. The bread's real claim to fame is its form. You shape it into a round flat loaf, it comes out of the oven about 8 inches in diameter and about 1 1/2 inches high with sesame seeds across the top. It turns out these dimensions are the perfect amount of bread for a Mufaletta Sandwich. If you use a commercial loaf of Italian style you'll end up either throwing away part of the bread or having more bread than the sandwich needs.

TO ASSEMBLE THE MUFFALETTA

Provolone, thinly sliced (you may use any combination of mild cheeses)
Burrata or mozzarella, thinly sliced
Italian salami, thinly sliced
Mortadella, sliced
Prosciutto or similar cured meat, sliced
8" artesanal bread roll (see above) sliced in half
Slice your bread roll in half and drizzle both sides generously with extra virgin olive oil.
Layer all your ingredients except the salad in alternate layers until you have sufficient filling.When you have reached your final layer finish with a covering of the olive salad.Replace the other half of the roll and press with a heavy weight forabout 30 minutes but no longer than two hours.This allows the flavours to meld and the juices to soak into the bread.