The dish I ate more of than any other, and that is So ho it went 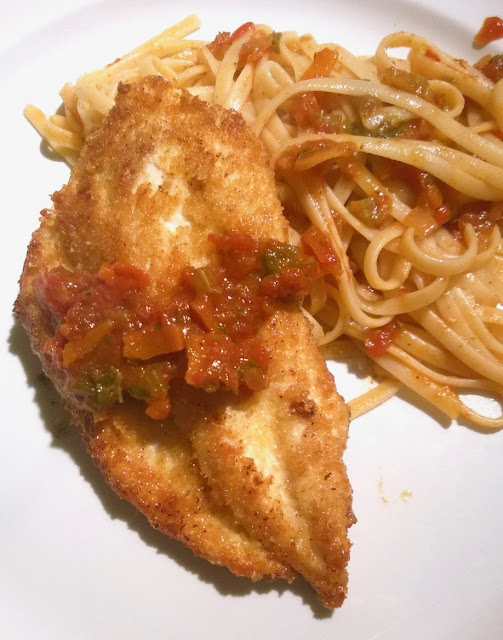 just as I remembered it
Vast menus make me particularly nervous in restaurants, where they scream: "FRESH FROM THE DEEP FREEZE". I also find any mention of "chef's special sauce" offputting (don't ask). What dampens your appetite on menus? And how do you decide what to order? Gut instinct, methodically weighed up pros and cons, eliminating items with unwanted ingredients? Or do you always just get the burger?An influential psychophysicist by the name of Howard Moskowitz once said: "The mind knows not what the tongue wants." Indeed. Spaghetti and fried eggs might well seem taboo and become a bit of a guilty  pleasure when the fridge is bare, but in the end, I have to say it is something I have even succumbed to while eating out budget style back in the day.Well perhaps not the fried egg,more the chicken cutlet. How is it possible that a dish that is on almost every Italian restaurant menu and yet does not appear in any book about Italian cooking, didn’t even originate in Italy? And how did it become so synonymous with Italian food? Well, you are about to find out all about this iconic dish.Let me set the scene.Old Compton Street, Soho,London 1986.I had graduated Art College and was working in the art department of Vogue magazine.I  had a lot of friends still studying design and fashion. mostly at the then named St Martins College of Art on Charing Cross Road.My friends were on student grants and even though I had a good job,was not yet flush.My social social life seemed to focus around Soho.Centrale, Bar Italia The Cappucetto, Maison Bertaux, Ed´s easy Diner, Patisserie Valerie and "The French" pub.But one eating establishment I frequented more than the others the POLLO BAR.    Lets take a typical Saturday morning.After a progression of Fran Lebowitz style phone calls our set would rendezvous late morning
at Patisserie Valerie for one or more coffees, accompanied by an opera cake or a florentine,in my case most often the latter.A splinter group would then cross the road for a tuna Foccacia at the Cappucetto,and possibly another coffee.Having all gone our own ways for for weekend shopping therapy we would reconvene to take in a movie followed 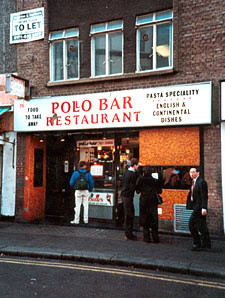 by dinner at the POLLO.That well-loved, cheap eating place that had been serving enthusiastic boho- chic artisan customers like us for generations.Sadly "Sans I,Sans cheese,Sans everything,POLLLO closed its doors in March 2005, putting paid to the dorée years of my jeunesse. 20 Old Compton Street, with its ox-blood booths, Lapidus beanpole railings,contemporary ceiling,murals, top notch signage, and perfectly preserved light fittings no longer had hungry queues waiting outside. 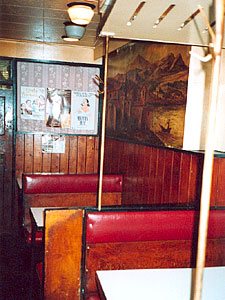 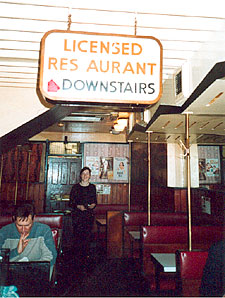 It had always remained the proverbial Soho institution for as long as anyone could remember. A proper bargain Italian with perfect 60s decor, friendly banter and a worryingly high turnover of chefs (there always seemed to be a 'chef wanted' sign in the window).It wasn´t fancy. It was an Italian restaurant. The inside looked something like a truckers caff, with Formica tables and little booths, and there was always more room downstairs if it looked full. There wasn´t a lot of space and the tables were closely packed together, but the food was hearty and the prices were laughable for central London. The coffee was rocket fuel - and the waitresses insisted on doubling you up in the booths with complete strangers.There was a choice of starters, either a smaller portion of any of the pasta dishes,soups (the gazpacho, although strictly speaking Spanish rather than Italian, is nice!),garlic bread  (a little disappointing, but then, it isn't really an authentic Italian dish),
and some lovely side salads which cost from £1.50 - £3.50.The main courses consisted of a variety (unsurprisingly) of pasta and pizza dishes, again the price range for these tends to be between £3 - £5. There were some risottos as well, and some meat dishes, such as chicken with rice or veal which were a little bit more expensive,but cheap and cheerful always remained the operative term at this Italian stalwart.Portions were generous and I was never ever disappointed by the food. Desserts included Tiramisu and Panetonne, and also ice cream.It was possible to buy carafes and half carafes of house wine, but there wasn´t a separate wine list as such. You could always ask for tap water as well.It beat fast food places like Pizza Hut hands down. 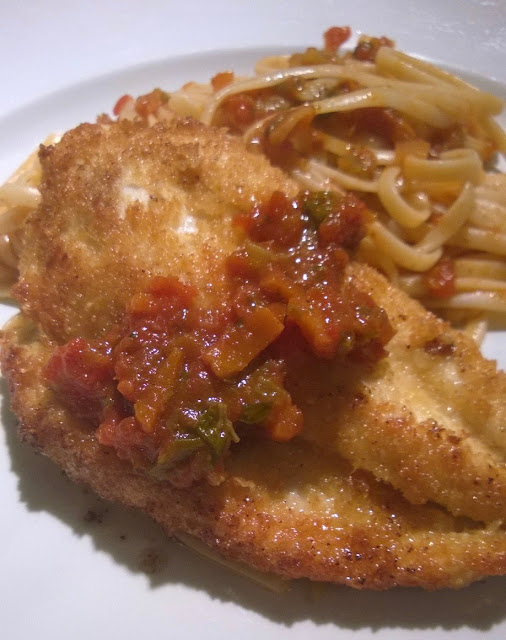 Pollo alla parmigiana with spaghetti marinara
Although not a typically authentic Italian dish Chicken Parmigiana is taste made for enjoyment following classic Italian combinations. Originated from Aubergine Parmigiana recipes this dish was created by Italian Immigrants in the 1950´s and has since become a favourite Italian dish around the world. The combination of succulent breaded chicken and parmesan cheese makes it hard to resist.Marinara sauce is the next key ingredient for the dish and a nice homemade sauce can’t be beat! Some canned San Marzano tomatoes, a few herbs, garlic carrot,celery and onions and you are well on your way to a perfect sauce. However, if you have a favourite canned tomato sauce you’d like to use, go for it! Pre-made sauce will undoubtedly get you an excellent chicken parmigiana
faster,possibly achieving that original restaurant flavour.
1/2 cup seasoned bread crumbs
1/2 cup grated Parmesan cheese,
1-1/2 teaspoons dried oregano,
1/2 teaspoon dried basil
1/2 teaspoon salt
1/4 teaspoon pepper
1 large egg
1 tablespoon water
4 boneless skinless chicken breast halves (4 ounces/120g each)
2 tablespoons butter
2 cups Marinara sauce
4 oz /120g cooked spaghetti
1 cup shredded part-skim mozzarella cheese
Hot cooked fettuccine or pasta of your choice

In a shallow bowl, combine the bread crumbs, 1/4 cup Parmesan cheese, 1 teaspoon oregano, basil, salt and pepper. In another shallow bowl, combine the egg and water. Dip chicken in egg mixture, then coat with crumb mixture.
In a large skillet, cook chicken in butter on both sides until a thermometer reads 170°.
Meanwhile, in a large saucepan, warm through the marinara sauce,
Cook over medium heat until heated through. Spoon over chicken; sprinkle with any remaining Parmesan cheese. Serve with the spaghetti.
Email Post