Dare to be different.Pork tenderloin tonnato 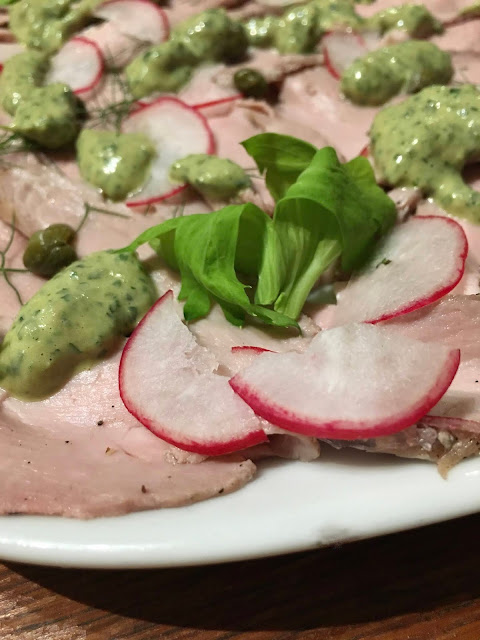 Anchovies, tuna and mustard come together to make a creamy backdrop for this summer sensation. Vitello tonnato (veal with tuna sauce) is a northern Italian classic, but it can be hard to convince the uninitiated that it's even a good idea. Not only is it delicious, though, it's just as good ( if not better,I think ) when made with pork. I love tonnato so much that I could eat it for breakfast.
It evokes the mediterranean for me –exciting, summery escapades, daring to be different, where all cares in the world are fixed by rose blushed doughnut shaped peaches, white wine, anchovies, asparagus, quiches, the heady aroma from air born eugenol wafting off pots of basil, the unmistakable fragrance of vine tomato foliage as you brush past it, walking through lemon groves, wild asparagus trodden under foot, juicy fresh figs and purplish red summer pudding (though not necessarily in that order). This for me is the epitome of summer eating.
The division between meat and fish at the dinner table has always been particularly marked and the traditional recipes that include the presence of both these two ingredients are rare. In large part this is due to the principles that marked the eating habits from the Middle Ages to the end of the 19th century with the juxtaposition of “fat” food, represented by meat, to “lean” food represented quintessentially by fish. And even today, not only the dishes, but also the menus and the sequence of courses within the simple meal usually do not contemplate the marriage of the two foods. Vitello tonnato is the exception
The dish was born thanks to a particularly imaginative cook who quite clearly wanted to challenge conventions by associating fish and meat. Or is there an underground tradition that contravenes the rules? None of this, rather a bit of both. Surely the first culprit is the anchovy.
The intensely fishy, salty flavour of anchovies has given them a bad reputation – even among the most adventurous eaters. But disappointing experiences are often due to cheap, overly salted products.
You may be unaware that many popular dishes include anchovies, with as little as an eighth of a teaspoon subtly buoying up a recipe. If there’s a taste you can’t quite place, they may well be the culprit. They add an umami depth and robustness, without overt fishiness. They feature in many store-cupboard staples, from Worcestershire sauce to Colatura alici (Garam) and Thai nam pla (fish sauces made with fermented anchovies).
In the 19th century, when Vitello Tonnato first began appearing in cook books, Piedmont was allied with coastal Liguria, where tuna was canned. Along with the tuna trade, oil, lemons and caper,the other elements of tonnato sauce, also found their way into Piedmont. The tuna was treated just like these other elements, as a condiment.
What Vitello Tonnato did not have back then was mayonnaise. That is certainly a 20th-century addition. Before, the tuna would likely have been pounded with the capers and herbs and oil( possibly a raw egg yolk ) to give it creaminess. Mayonnaise, in a way, is cheating. People who cook Vitello Tonnato are often proprietary about their method, much in the same way French cooks are about coq au vin.

Just by looking at photos of the sauce you can appreciate the differences even in the look of the final dishes interpreted by a variety of chefs.If you notice mine is green. Parsley is often used along with celery leaves to garnish the dish and I took a leaf out of Ottolenghi´s book and included the parsley leaves to the sauce. Here we are again advancing the dish to yet another level.

Pork tenderloin tonnato
1 (1-pound) pork tenderloin
Kosher salt and freshly ground black pepper
1/2 cup extra-virgin olive oil, plus more for drizzling
parsley, celery leaves, radish,for garnish
Preheat oven to 250°F. Place pork on a rimmed baking sheet and season all over with salt and pepper. Drizzle with olive oil and rub all over to lightly coat. Roast pork until instant-read thermometer registers 140°F, about 30 minutes.
In a large skillet, heat 1 tablespoon vegetable oil over high heat until lightly smoking. Add pork and cook until browned on all sides, about 5 minutes total. Transfer pork to refrigerator to chill for at least 1 hour and up to 8 hours

While the tenderloin is in the oven.Place all the ingredients for the sauceexcept the olive oil  in the bowl of a processor.Blitz for a minute to form a rough paste.Scrape down the sides of the bowl and with the machine running slowly add the olive oil in a steady stream until the consistency is that of mayonnaise.set aside until ready to serve.

TO SERVE
Slice pork very thinly against the grain. Arrange on a large plate and spoon tuna mayonnaise all over, spreading to form an even coating. You can refrigerate the pork tonnato, covered with plastic, for up to 8 hours; it will improve in flavor as it sits.
When ready to serve, toss garnish with a small drizzle of olive oil and salt. Arrange on top and serve right away.
Email Post