The summer of Super Mario peppers up a storm with panzanella

I have always been an obsessive of all things Italian which might give me the name of Italophile. Some say "Italians do it better", to me it sounds like a euphemism for you know what, (note to self, can I call it relations? ) Well its certainly been the year for the gigolos, ciccios and bella ragazzas .First of all they won the Eurovision song contest. They then reached the Wimbledon mens final thanks to Matteo Betterini who sadly fell just short of lifting the trophy, but later the same day his piccolo fratellos lifted the football cup and football was going home to Italy. It was not such a good result however to go down in the history of one already septic isle. The fact that England, now an outsider, was in a European cup seems as illogical to me as Australia being part of The Eurovision song contest, but hey ho, there are stranger things to worry about at the moment. 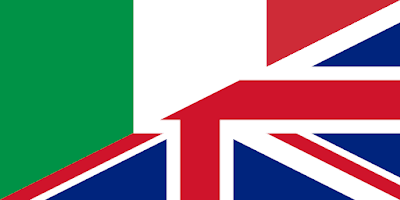 Few people tend to bring up Italy and Britain in the same sentence nowadays unless the topic is football. However, perhaps that’s not the correct approach to take. Indeed, these countries share a rich political history that the average citizen in either case tends to overlook. From mutual diplomatic endeavours to clashes on the battlefield, these nations’ experiences with one another are arguably the most fluctuating, yet interesting, throughout the entire continent of dare I say it, Europe. It was inevitable therefore that "levelling up" and political score settling would be layered onto a football match. Italy was a founding member of the European Union and is currently led by a statesman often credited with saving it, Italy’s prime minister, Mario Draghi, sometimes called “Super Mario” for that very reason.In the text that follows I have borrowed extracts and drawn from from syndicated reportage in both the European press and the New York Times.
Immediately after Italy’s goalie blocked a penalty kick to defeat England and become the soccer champions of Europe, Carlo Cottarelli, a prominent Italian economist sometimes mentioned in the same sentence as"potential prime minister", celebrated with a single word.“Brexit!!!!!!!!” he wrote on Twitter. Soon after followed “Brexit Completed” memes filling the Italian web.
Mr. Cottarelli had a lot of company, from European members of parliament to raucous Italian fans and the continent’s other leaders, in connecting England’s failure in the finals of Euro 2020 to Britain’s exit from the European Union, known the world over as Brexit. Other Italian and European politicians were less subtle. Before the final began, President Ursula von der Leyen of the European Commission  gleefully donned the Italian colours with her name on the jersey above the number 27, which is the number of countries in the bloc. ( If England had stayed, she would had to have worn 28 ).
Before the game, Nigel Farage, an architect of Brexit, said he did not appreciate Ms. von der Leyen’s public preference for Italy.  Sitting on a couch and resembling a British flag that had donned a blazer and tie, Mr. Farage said he “didn’t want to bring Brexit into it, believe me, but it can’t be helped because Ursula von der Leyen and other European commissioners are making it absolutely clear they want Italy to win.” 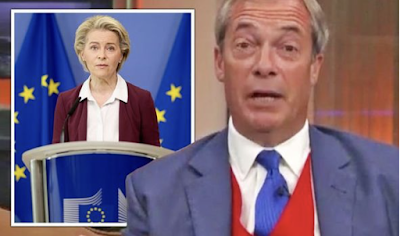 “They’re telling us that the whole of Europe wants Italy to win,” he said. “They can’t bear the thought of Brexit, Britain succeeding.” After Sunday night’s game, they didn’t have to.
England is just one third of a once United Kingdom that gambled its own stability and future by leaving the E.U. last year.Interestingly, some of the most enthusiastic rooting against England
came from the corners of the United Kingdom most disgusted with Brexit.Before the game, the Scottish newspaper The National superimposed the face of Coach Mancini on Mel Gibson’s character in the movie “Braveheart,” with the headline, “Save us Roberto, You’re our Final Hope: We can’t take another 55 years of them banging on about this.” 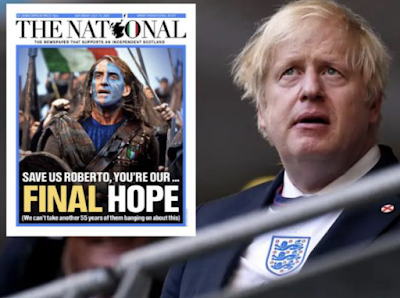 Italy's show stealing achievements need to be applauded not booed, so I decided what better way than to make classic panzanella but with a celebratory spin.The classic bread and tomato salad from Tuscany, is everything I love about simple summer cooking.It is a simple Tuscan, peasant dish (cucina povera) which is immensely popular in Italy, using the bounty of tomatoes during the summer, and stale bread which is almost a staple in any Italian kitchen. Its so simple there’s not even a need for a real recipe, but I know that many of you would love to have one so I´ll do my best. Maybe you even saw this on Stanley Tucci’s Searching for Italy series? It brings together so many of the season’s gems: juicy sweet, ripe tomatoes, fragrant basil, and pungent sweet red onions, all united by a peppery olive oil and  a dash of vinegar or lemon  juice.All the colours of the italian flag and more.
So what was my twist here, the croutons. In Italian, cacio e pepe( literally meaning cheese and pepper) is a simple, well-known Roman pasta dish, but the cacio e pepe treatment can and I think should be applied to so many other things...like croutons!
Through trial and error (and many left over loaves of bread), I landed on a two-step process for ensuring cheesy, peppery bliss in each toasty bite. First, tossing torn chunks of bread generously in cacio e pepe dressing, and secondly baking them in the oven till crispy on the outside and chewy within.
Panzanella with Cacio e pepe croutons
3 or 4 medium to large tomatoes
pieces of stale Italian style bread, torn roughly
a few fresh basil leaves, torn into pieces
1 cucumber, sliced (optional)
1 red onion, cut into pieces (optional)
about 3 tablespoons of good quality extra virgin olive oil,
1 or 2 teaspoons of red wine vinegar
about 3/4 teaspoon of Kosher or sea salt
For cacio e pepe dressing:
3/4 cup (65 grams) finely grated Pecorino Romano
1/3 cup boiling water
1/3 cup extra-virgin olive oil
2 teaspoons freshly ground black pepper, or more to taste (I like a full tablespoon!)
TO MAKE THE DRESSING: Add the Pecorino to a large bowl, and whisk in the boiling water until the cheese is melted and evenly incorporated, about 15 to 30 seconds. Slowly whisk in the extra-virgin olive oil until emulsified, then add the black pepper. Reserve 1/4 cup of the dressing for assembling the salad.
Add the bread to a sheet pan lined with parchment or a silicon mat. Season with a few big pinches of salt, then add the remaining dressing. (Don’t rinse the bowl you used for the dressing—you’ll use it later ) Using your hands, toss until the bread is thoroughly coated on all sides with the dressing.
Place the sheet pan in a cold oven, and heat to 375 degrees F. When the oven reaches temp, check the croutons. If they’re browning nicely, remove the sheet pan from the oven and flip them over. (If not, keep baking for a few minutes longer.) After you’ve flipped the croutons, bake about 4 to 6 minutes longer (but could be a little longer or shorter depending on your oven), or until they’re golden and crispy on the outside, but still a little soft in some parts from the dressing. As they cool, they’ll continue to crisp up.
Place all the ingredients except the croutons into a deep salad bowl which will accommodate the rest of the ingredients. Sprinkle with the salt, drizzle with the olive oil and vinegar and toss again, until well mixed.
Leave for a few minutes so that the juice can soak in then add the crotons and the remainder of the dressing and serve.
Email Post