Anthony Bourdain once said "The way you make an omelette reveals your character." Love him or hate him, we can't deny that in a style partaking of Hunter S. Thompson and Iggy Pop, the culinary  bad boy Bourdain, during his life, touched many of our hearts in one way or another, be it reading one of his culinary opus or watching one of the episodes of his documentaries, laughing out loud at the behind the scenes nightmares as told in Kitchen Confidential or just making one of his recipes from the Les Halles cookbook. He was like a blend of Scorsese and Tarantino whizzed up in a kitchen blender and what came out were some private backstage horrors. He was a maelstrom in the kitchens of New York. His life on the culinary edge of these buzzy kitchens perhaps can only be understood by a real cook, one who has seen these environments first hand, through clouds of steam emanating from kettles of boiling stock. I have been a fan of Anthony Bourdain's since the day I read and learned why I shouldn't order fish on Mondays. This secret, which is somewhat common knowledge now, originated with Bourdain some two decades ago.
He cautioned that if you order fish on a Monday, there is a chance that the restaurant placed only one seafood order for the weekend, and the filet came in on a Friday. If the chef didn't sell as many filets as he anticipated over the weekend? Guess what, your fish is four days old, and has been out of the water for even longer.
This summer marks the third anniversary of his passing. On June 4, 2018, Anthony Bourdain posted a final photo to Instagram. The image shows a glistening slab of pork on a mound of sauerkraut, with a turned potato peeking out from underneath. At the time, it was innocuous and did not presage the tragedy that would come four days later. “Light lunch,” the caption reads. That seemingly mundane Instagram post has transformed into something of a virtual tombstone, simultaneously comforting and stoking the grief of those who visit it — not unlike the graves of Jim Morrison in Paris or Jean-Michel Basquiat in Brooklyn. It still receives new comments daily, often dozens of them. They come from people hoping to reconnect with him; people struggling to comprehend his final days; people missing his wisdom; people hoping to pay tribute to a man who has no physical gravesite to visit. 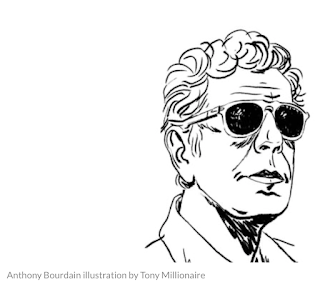 "You learn a lot about someone when you share a meal together."

Three years on a new documentary has stirred some controversy.The film is supposedly about why Bourdain was who he was, how he went from an anonymous chef to a pop culture icon. Suffice it to say there's been some disagreement over how well the film achieves that goal. Some say that Kitchen Confidential, No Reservations, and Parts Unknown offer a deeper understanding of Bourdain than the new documentary itself. The controversy does not end there.

"To me, life without veal stock, pork fat, sausage, organ meat, demi-glace, or even stinky cheese is a life not worth living."

Morgan Neville, the director of the film has revealed that he used A.I. software to recreate the late chef and travel guru's voice for parts of the new documentary. The disclosure quickly sparked a debate on social media over the ethics of simulating Bourdain's voice, particularly in a documentary context. The film is only available to be viewed in cinemas at the moment, but meanwhile he has a final book giving us one final chance to go write around the world with Bourdain one last time. 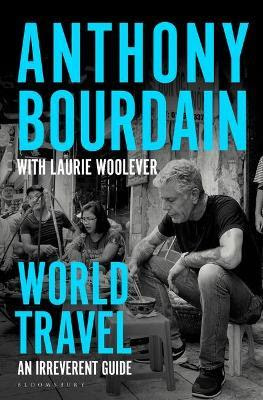 Not dissimilar to the concept of "Parts Unknown" , an edible adventure into the world of  extraordinary culinary cultures "World Travel, an irreverent guide" is a  kind of travelogue. With “World Travel,” Laurie Woolever makes it possible for fans to travel with Anthony Bourdain once again.When he died in 2018, he had just begun working on this project.
“It was never my intention to be a reporter, a critic, an advocate. It was also never my intention to provide audiences with ‘everything’ they needed to know about a place – or even a balanced or comprehensive overview. I am a storyteller. I go places, I come back. I tell you how the places made me feel.
His longtime assistant Laurie Woolever made the decision to carry that book to its completion, and now, World Travel: An Irreverent Guide is a reality. Based on one hour of audio she recorded of their brainstorming session, years as coworkers and friends, it’s a vast catalogue of Bourdain’s work."It was a hard and lonely thing for her to to coauthor a book about the wonders of world travel when your writing partner, that very traveller, is no longer travelling that world", she said.She’s been a writer, journalist, editor, cook in restaurants and private kitchens, and an assistant to chef Mario Batali. After working with Bourdain for more than a decade, Woolever was uniquely positioned to bring this book to life, despite no new words from Bourdain himself. To provide context around the words Woolever deftly pulled from Bourdain’s TV shows and writings, she collected essays from his friends, colleagues, and his brother Christopher Bourdain, whose contributions are particularly illuminating of the life Bourdain lived. The fact that publication was delayed from 2020 because of production costs  may well be a blessing. While the world is far from clear of COVID-19, many are beginning to feel hopeful that travel and dining will be safer in the near future. But beyond its (limited) use as a guide, this book is full of stories that make for good reading on their own, transporting the reader to many of Bourdain’s favorite places, including ones that are not often covered in mainstream Western food and travel media. And of course, this volume, while bittersweet, will be welcomed by Bourdain’s many fans.
Email Post