"What's that got to do with the price of fish?"

There was a time when fresh fish was a cheap source of protein for the less well-off. But before refrigeration it did not keep and had to be bought day by day, and the price varied according to the season and the size of the catches. So it’s daily price was a significant factor in peoples´ lives, perhaps dictating whether one could buy sea bass or even sole, or might they be stuck with cod, again, or no fish at all. Much the same today, I will go to the market with fresh fish in mind and check out the price
according to availability and the other considerations.
Once in a while a recipe comes along that literally blows you away it is so good. Recently one of these stand out recipes popped up on my phone and almost immediately I was on a mission. Red Mullet or Salmonete as we call it here in Portugal, one of my all time favourite fish, was the order of the day. My first port of call was offering it at €42 a kilo. Were they having a laugh? Had the price rocketed because it was the summer holidays, supply and demand and all that? Yes it had. My first thoughts were, Is the size of the Algarve catch being swallowed up by the posh hotels? and my second premonition, probably more accurate, was that it was being sold to the Spanish. Is there a question of export and are we as locals being deprived of value for money quality fish because of short supply. Had the early bird caught the worm, or were we losing out to dealers with bigger clout? So, interesting as the expression may be, the price of fish is important to me because it affects the cost of my dinner, and if I am cooking for friends or clients in August, the consideration of passing the cost of their dinner on to them. Well the story had a somewhat happier ending when I stumbled upon a trusted supplier who had a smaller variety, but something that in the end would be more suitable for what I was trying to achieve, and at third of the price. 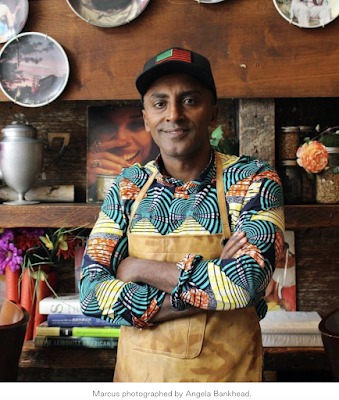 Well now for the story behind the recipe .As you know I have recently been experimenting with consommé and broths and this fell comfortably into that category. It was not just the originality and concept of the recipe that got hold of me, but much more its provenance. There is a new kid on the culinary block. Having lost bad boy Bourdain, the New York culinary world is now graced with more than a saint. He is the current darling of American Vogue, and not an issue hits the newsstands without editorial pages being given over to him. He is Marcus Samuellson (Real name Kassahun Joar Tsegie), Ethiopian Swedish American celebrity chef, restaurateur and television personality. Samuellson is the acclaimed chef behind many restaurants worldwide In North America, Canada, London the Bahamas, Sweden and other Scandinavian countries.

His restaurant group named after his signature restaurant Red Rooster in Haarlem, New York now comprises 11 different brands. His relationship to Ethiopia is a complex one. Samuelsson was born to a farming family in a rural Ethiopian village in the 1970s and contracted tuberculosis at the age of two. In a last-ditch effort to save her children, Samuelsson's mother walked him and his sister 75 miles to a Swedish hospital in Addis Ababa for treatment. She later died, but Samuelsson and his sister recovered and were adopted by a Swedish couple. After becoming interested in cooking through his maternal grandmother in Sweden, where he now has several restaurants including NORDA, Samuelsson studied at the Culinary Institute in Göteborg (Gothenburg) where he was raised. He apprenticed in Switzerland and Austria then moved to New York in 1994 as an apprentice at Restaurant Aquavit, before establishing himself as an acclaimed chef in his own right. Samuelsson has since reconnected with his birth father  Tsegie, the father of eight others ( the chef's half-siblings ), and still resides in the Ethiopian village where Samuelsson was born. 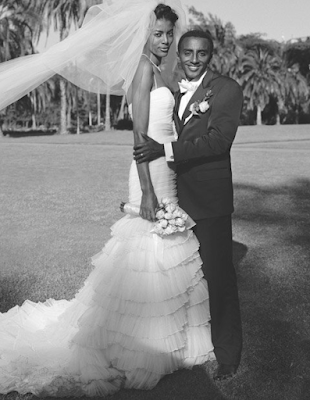 He has forged even more Ethiopian ties through marriage; Maya Haile his model wife was born and raised in Ethiopia and has a strong grasp on the language and customs.

"I always find it such a paradox that I was born into very little food, but yet I've made my whole life about food," he says. "My structure and pragmatism comes from being raised in Sweden. And my sort of vibrancy and warmth to cooking and feel-based food that I love comes definitely from Ethiopia." 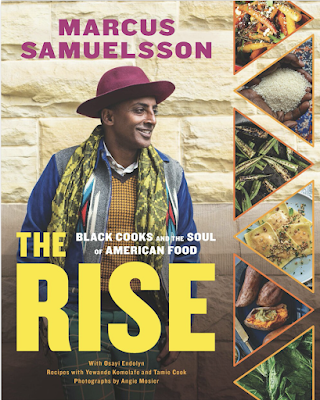 With twelve cookbooks already under his belt, his most recent book The Rise gathers together an unforgettable feast of food, culture, and history to highlight the diverse deliciousness of Black cooking today. Driven by a desire to fight against bias, reclaim Black culinary traditions, and energize a new generation of cooks, he  shares his own journey alongside 150 recipes in honour of dozens of top chefs, writers, and activists—with stories exploring their creativity and influence.
His mission with each project – whether it be a new restaurant, book, or TV show – is to celebrate the food, the culture, and hopefully inspire others to be adventurous, learn something new, and get cooking! This year he has been appointed to curate an initiative that highlights the incredible work of 10 up-coming young New York chefs. For the first time in its history, this year’s Met gala will feature a sustainable plant-based menu with recipes from this carefully selected group.
Red Snapper with Smoked Tomato and Fennel Broth
This dish has instantly become my favourite summertime dinners of 2021. It's full of fresh, seasonal produce like local  grown tomatoes and fragrant fennel from the garden. Searing fish quickly in a smoking hot pan is one of our favourite ways to cook fish since it ensures you get that perfectly crisp skin and tender flesh every single time. Also, this recipe is versatile and adaptable — if you can't get your hands on snapper, feel free to swap in whatever fish looks best at your fishmonger that day.
FISH
4 (4-ounce) fillets red snapper

FOR THE FISH:
Preheat a large skillet over high heat. Season the snapper fillets with salt and pepper.
Once hot the pan is hot, add a touch of vegetable oil. Once it begins to slightly smoke, carefully place the fillets in the pan, skin-side down, pressing immediately with a fish spatula. Cook for 2 to 3 minutes on the first side then flip. Let cook for an additional 45 seconds to 1 minute and remove, transferring to a plate.

FOR THE FENNEL BROTH:
In a large pot, combine all the ingredients. Bring to a gentle simmer and cook for 4 hours.
Remove from heat and let sit overnight in the refrigerator. The next day, strain and reserve until serving.

FOR THE SMOKED TOMATO:
Heat a grill or grill pan over high heat.
Rub the tomatoes liberally with olive oil. Place on the hot grill and cook, covered, until well-charred. Remove from heat and let cool.3.
Once cool enough to handle, chop the tomatoes and add to a bowl. Mix the tomatoes with the remaining ingredients, seasoning to taste with salt and pepper.

TO SERVE:
In a small bowl, toss the  fennel, olive oil, lemon juice, chives, fennel pollen and salt and pepper.
To plate, place a large spoonful of the smoked tomato mixture in the middle of a large shallow bowl. Gently rest a snapper fillet on the tomatoes, followed by a nice mound of the shaved fennel salad on top. Pour 4 ounces (125ml) of the fennel broth in the dish right before serving.
*Adds a bit of drama to every bite
Most accomplished cooks don't like the idea of a "secret ingredient." They insist that every ingredient is important, that technique and taste matter as much as the cost of your shopping list, and that no amount of truffles or foie gras can rescue bad or mediocre cooking. I'll buy that, but it's hard to ignore the near-magical qualities of some ingredients. They may not turn us into chefs overnight, but they do have the power to transform good cooking into something truly memorable.

"if angels sprinkled a spice from their wings, this would be it."

Take, for instance, fennel pollen. It's a trendy spice, bandied about in cheffy circles and forager networks.
Fennel pollen refers to the tiny dry heads of the wild fennel flower. If you like fennel seeds, then you are sure to enjoy the sweeter and more intense taste of the fennel flower. A small amount of fennel pollen can transform the flavour of a dish, which is probably how it adopted its "spice of angels" moniker. Fennel pollen is an incredibly powerful spice, with notes of licorice and citrus. It tastes like pure summer joy. One word of warning, use it sparingly.
And a final word from Marcus Samuellson himself
"The COVID-19 pandemic has had particularly severe effects on minority-BIPOC businesses. Throughout history, Black-owned businesses have been systematically underfunded and neglected. COVID-19 has exacerbated and revealed the disproportionate challenges faced by these businesses, which is why there is a desperate need for a progressive fundraising campaign to help turn a new chapter for these businesses. The Black Businesses Matter Matching Fund aims to raise funds to support these struggling businesses through the power of crowd-sourced campaigns combined with exponential matching funds from both corporate and individual donors.
With our support, they can help keep open and rebuild local, independent Black-owned and operated businesses. It is crucial to provide these businesses with the attention, assistance and support they deserve and need".
Email Post