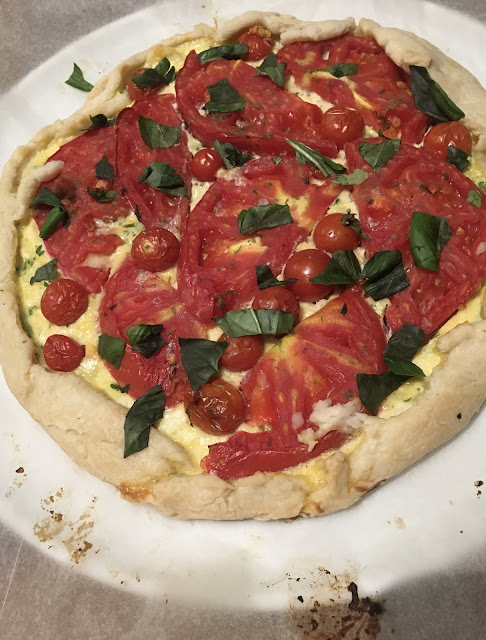 There are three different mixing methods to creating pie dough. The first method is the flaky method, used for Pate Brisee, or "broken" dough. This dough is created by rubbing butter into the dry ingredients until it forms pea size pieces. Then add the liquid, mixing gently, and chill. This type of dough cannot be reused, so great care must be taken when rolling it out. The second type of mixing method is the mealy dough method, used for Pate Sucree and Pasta Frolla ("shortbread"), or sweet dough. This method is very similar to the flaky method, however, the butter is rubbed into the dough until the mixture resembles cornmeal . Lastly, we have the creaming dough mixing method, in which butter and sugar are beaten until they are light and fluffy. Then eggs are added one at a time and flour is finally stirred in until combined. Interestingly, when creaming butter and sugar, there is practically no way to overbeat it, so until adding the flour, don’t concern yourself with over beating at all.
If you know these three mixing methods, you know how to make almost any pie dough someone will throw at you.I have just mentioned an Italian pastry dough known as pasta frolla, similar to its French counterpart, pâte brisée. It is a buttery shortbread type dough normally used in Italy for fruit or jam crostate, but remove the sugar from the recipe and it´s something else. Nowadays, so many tart/pie crust recipes use a food processor, which can lead to a much less tender crust. This crust is perfectly tender, utterly butterly and funkily flaky, which I think is attributed to the good old-fashioned method of mixing of it by hand. Given that tomatoes are in season right now, it’s a great time to do something different with them and I thought I would make a kind of pizza pie (above). This pie is like a freeform pizza made with a sugarless shortbread crust. Interested? here is the recipe.
Freeform tomato and cheese pizza pie
Loosely based on Based on Ricotta and Tomato Tart
from Bill Granger's Sydney Food. serves 2
FOR THE TART DOUGH
1 cup all-purpose flour, plus more for the work surface
1/4 teaspoon salt
6 tablespoons unsalted butter, chilled and cut into small pieces
4 tablespoons iced water
TO MAKE THE TART DOUGH In a bowl, whisk together the flour and salt. Scatter the butter over the flour mixture and, using your fingers, (as you would making a crumble) gently press the butter and flour together until it resembles a coarse meal. Drizzle the iced water over and, using a fork, gently toss and stir just until the dough comes together in a cohesive clump. Gather the dough into a ball and place it on a lightly floured work surface. Flatten the dough into a thick disk and wrap in plastic wrap. Refrigerate for at least 1 hour and up to 2 days.
FOR THE FILLING
2-3 ripe Portuguese Rosa tomatoes, finely sliced (improvise tomato type to what is available)
sea salt
handful small cherry tomatoes
1 cup ricotta
1 egg, lightly beaten
1/4 cup cream
1/4 cup grated Azorean cheese (Queijo Ilha Açores)
a pinch of ground nutmeg
freshly ground black pepper
1/2 cup finely shredded rocket
1 egg yolk, lightly beaten, for glazing
handful finely torn basil
TO MAKE THE TART
Preheat oven to 200 degrees C.
Place tomatoes in a colander, sprinkle with salt and leave to drain. Place pastry dough on a lightly floured surface & roll out to a circle about 35cm in diameter and 3mm thick. Place dough on a lightly floured baking tray.
Place ricotta, egg, cream, queijo da ilha, nutmeg, salt and pepper in a bowl and mix well. Add rocket and stir to combine. Place this mixture in the centre of the dough, and spread filling over the dough leaving a 5 cm border around the outside. Using your hand, lift and push the border onto the filling. Arrange tomato slices over the top of the filling. Brush pastry with egg yolk and bake in the oven for 35-40 minutes or until golden. Serve sprinkled with chopped parsley and freshly ground black pepper.
Email Post