Back to the future 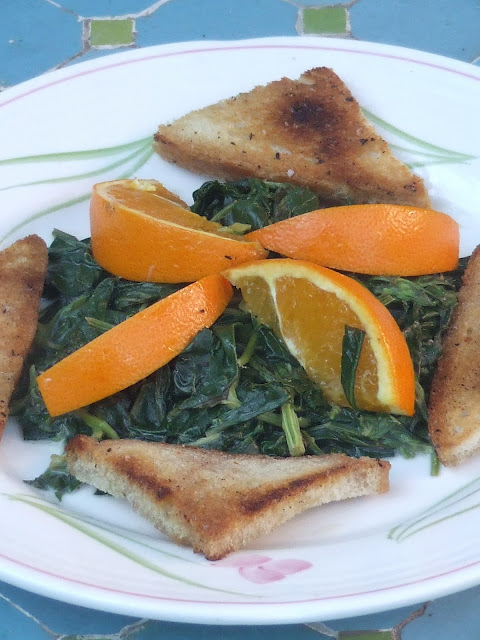 I have a glut of acelga ( wild spinach beet ) from last week´s grovelling in the earth. I have to prove my worth in following through the skills I learnt at foraging academy.Everybody´s talkin´Blumenthal, so with all the buzz last week surrounding the opening of Heston Blumenthal´s "Dinner" I decided I should take a leaf out of his book,follow fashion and step back in time by bringing another former classic back to life in the 21st century. When choosing spinach, assess its liveliness, none livelier I say than something one has just plucked from the ground.It should be bouncing and bright , not dull and limp.
As you stuff it into your saco de pano ( towelling or cloth bag to ensure freshly gathered herbs and greens hold their freshness and moisture, a must have for farmers marketing) it should crunch and squeak.
I cook spinach by leaving it to stew in its own juice, not blanched in salted water as in many mediterranean kitchens.My way, the English way, conserves flavour and virtues better.
The big spinach enemy is wateriness, and its natural allies are butter, olive oil,cream, anchovies, nutmeg or mace and citrus juices. A dash of sugar in a spinach soup or sauce will also help enhance its flavour.
In the 18th century,when Spain and Portugal exported these fruits to England, the Seville orange came into fashion and was often used as a flavouring. Creamed spinach flavoured with Seville juice was turned onto a serving dish and surrounded by a fence of fried bread triangles. Segments of  Seville orange then were placed on top of the spinach to form a central crown. This is a fine dish for the final days of January or February, when Seville oranges come into season.To this basic dish you can add poached fish or lightly fried white fish steaks. Fish, spinach and orange make a heavenly troika.

An 18th century dish of spinach with Seville orange

Reheat cooked spinach with the cream. season with salt, pepper and nutmeg.
Add the juice of a Seville orange to taste. turn onto a hot serving dish. Arrange the orange segments in the middle, peel side up, and make a fence of fried bread triangles round the edges. Fried bread is commonplace in the Portuguese kitchen as a device for soaking up juicy dishes.
Email Post