Out of the fire and into our roasting pans 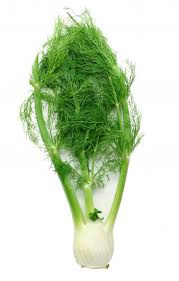 Funchal, the capital of Madeira, derives its name from the Portuguese word funcho (fennel). Funchal was named by the first settlers that landed on its shores, due to the abundance of wild fennel.The hillsides around Funchal that are stuffed with houses today were once amply overgrown with fennel. The first settlers simply cleared the fennel brushwood and named the city according to this plant.
"After the great "Seven years' fire" had burnt down the forests and enriched the soil of Madeira. It was soon after Zarco's ( Henry the Navigator´s naval explorer) return to Funchal that he first set fire to the woods behind the fennel fields of the coast, to clear himself a way through the undergrowth into the heart of the island; the fire blazed and smouldered till it had taken well hold of the entire mass of timber that covered the upper country, nothing in the feeble resources of the first settlers could stop it, and Madeira lighted the ships of Henry on their way to the south, like a volcano, till 1428".(sic)

The herb was in abundance when the first settlers put down their roots soon after Madeira was officially discovered in the early 15th century by João Gonçalves Zarco and Tristão Vaz Teixiera, who were under the command of Prince Henry the Navigator.
Used in low concentrations fennel gives a mild aroma and flavor, similar to anise, but much more mild and sweet....

Legumes assados com funcho
Serves 4-6 as a side dish, or part of a combined salad

Pre-heat the oven to 475F /240C
Prepare the aubergines and courgettes by cutting them into 2.5cm dice, leaving the skins on. Arrange all the vegetables in a roasting tin. Pour over the olive oil and toss everything around to give them a good  coating, Season with salt and pepper. Place on the highest shelf of the oven for 30-40 minutes or until the vegetables are toasted brown at the edges.
Serve hot as a side dish or cold with cous cous, salad leaves and top with goats cheese or feta. Dress the salad to your liking a spicy hot dressing like a harissa paste diluted with olive oil works well, and looks enticing.