Coming back for Moor 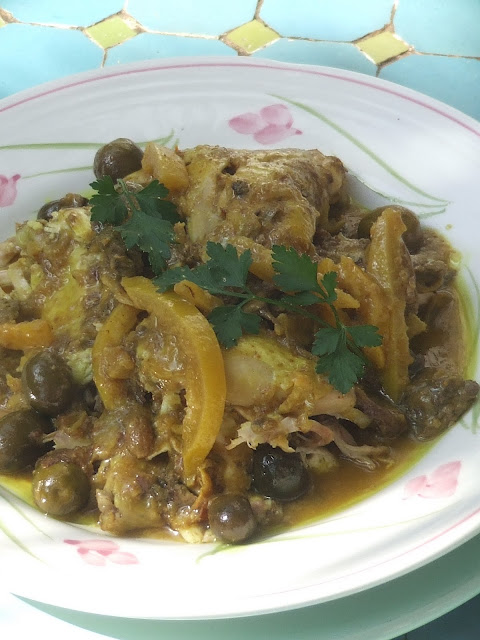 "Next month, when my lemons are ready, I will post a recipe for one of the most renowned Moroccan dishes containing preserved lemons, Djej Makali ( Tagine of chicken, preserved lemons and olives).By this time I will have returned from my up and coming trip to London with a tagine, or two under my arm.I have travelled the length and breadth of Portugal, and can I find a decent tagine shop, can I heck.The Moroccan influence in Casa Rosada will then be all set to kick in."
I keep my promise and here it is. The lemons are ready and delicious they are too.
London alas didn´t come up trumps on the tagine front. They were beautiful but not large enough for the job Casa Rosada had in mind.
The Moroccan tagine is directly descended from the Persian khoresht stew,
Traditionally a tagine is a robust stew consisting of meat, fowl or fish, vegetables or fruit, and spices slowly simmered in an earthenware pot with its distinctive conical lid.  The shape of the lid draws the steam upwards, while its unglazed underside absorbs the steam, concentrating the savoury juices in the bottom of the pot.If you don’t have a tagine, a heavy-lidded casserole is a decent substitute.I cooked this subtle dish of semi-stewed, semi steamed chicken in a heavy cast iron casserole. In theory therefore it was not a tagine but a pot-roast. What a pot roast it was, politely spiced with ginger, cumin turmeric and saffron with the salty tang of the preserved lemons and fleshy succulent olives.The resulting plate of gorgeousness was reminiscent of a coq au vin. The meat had cooked down sufficiently to just fall off the bone and await the moisture of the sauce it had been cooked in to be poured over.

1 large free range chicken
1teaspoon ground turmeric
1 teaspoon ground ginger
1 teaspoon ground cumin
4 garlic cloves crushed
1 onion grated
2 chicken livers
1 tablespoon extra virgin olive oil
300ml(1/2 pint) water
pinch of saffron threads
1 preserved lemon
110g pinky red and green olives ( if you can´t get kalamata can be a substitute)
salt and freshly ground black pepper
Trim the flaps of excess fat from the chicken at the opening of the cavity, and remove any other excess fat. Truss the legs and tuck them into the cavity. Rub the turmeric, ginger and cumin all over the chicken, and then smear over half the garlic.Season lightly with salt and pepper, then cover and set aside for up to 12 hours ( covered in the fridge).

Put the remaining garlic, onion, chicken livers, olive oil and water into a casserole , saucepan or tagine large enough to take the chicken.Stir and bring to the boil.Now, add the chicken and reduce the heat so that the liquid barely simmers.Cover the pan, leaving just a small gap for steam to escape, and cook for 11/2 - 2 hours,turning the chicken frequently so that the flesh is partially steamed and partially simmered to a melting tenderness.Meanwhile soak the saffron in a tablespoon of hot water.Scrape the pulp out of the lemon and discard. Cut the skin into strips, rinse thoroughly, drain and reserve. Rinse the olives. Bring apan of water to the boil, add the olives and blanch for 1 minute, to remove excess salt. Drain Thoroughly.
When it is done, take the chicken out of the pan and keep warm. Retrieve the livers, quarter them and reserve them with the chicken.Stir the strips of preserved lemon, the olives and the saffron into the remaining sauce in the pan, then simmer for 2-3 minutes.Taste and adjust your seasoning.Serve the chicken with the sauce spooned over and around it, scattering the bits of liver in amongst the olives and lemon.
And a suggestion for a starter.

It is difficult to convey how stimulating it is to crunch through such a kaleidoscope of flavors, tempered by a neutral mass of bread and cheese. Naturally, the mixture of herbs depends on availability and can also include radishes, spring onions and chives. But whatever the combination, it is a revelation to have such a fresh and simple start to a meal.
Email Post
Labels: The Moroccan kitchen