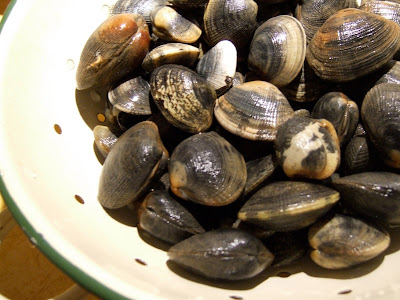 No pushing the prawn out, because nobody´s  pushing the boat out.We are currently deprived of our shellfish here in the East Algarve. No Molly Malone, "crying cockles and mussels alive alive-oh." - Oh no.The market is devoid of any type of locally harvested shellfish.The beaches are without the hardy all year round mariscadores.The restaurants of the East Algarve are not selling the most characteristic dishes of the Ria Formosa due to a ban on the harvesting of the bivalves that since March 28, has affected part of the south coast. Much sought after clams and mussels, are absent from menus, and the restaurants are losing valuable customers and revenue.
The presence of DSP biotoxins, which cause vomiting and diarrhoea, initially led to the ban on harvesting between Vila Real de Santo Antonio and Tavira,but last Friday, was extended to the entire coastline between the mouth of the Guadiana and Faro, including the Ria Formosa. The collection of samples by the IRNB-IPIMAR has been stepped up, and were again sent for analysis samples. The results are still not yet known.
The fisherman are also being strongly affected by the ban. Os barcos estão em terra e começa a escassear o dinheiro para pagar as contas. The boats are grounded, many of which are rented and the fisherman now have no income with which to pay their bills.
The Ministry of Agriculture and Fisheries has promised that it has in place measures to ensure financial support to fishermen,businesses and and market traders',in the days after stopping the activity.
The president and association of shellfish nurseries of Ria Formosa (Vivmar) says that "professionals' will wait quietly for the lifting of the ban", "but warns that" the aid has not come quickly ", not only for seafood professionals but also for amateurs.
"With the economic crisis and unemployment running high, many people came to the Ria Formosa to try and earn a living only to find the ban was put in place and no shellfish were being collected. " I know the mariscadores and others alike are currently without an income to support their home outgoings and children. It is hoped Social Security will step in and help.Meanwhile we have to push the goat out instead.