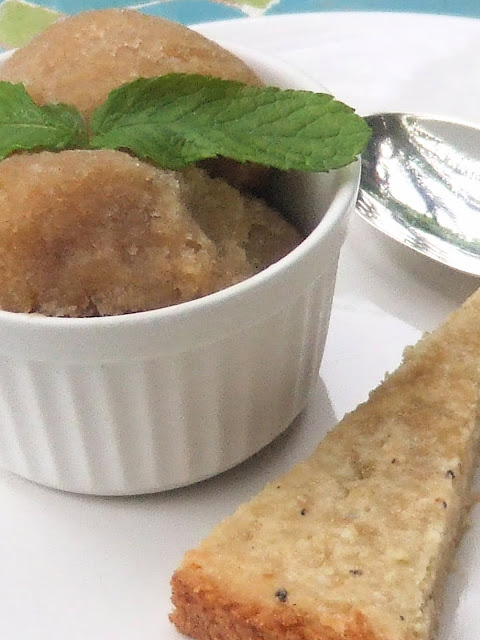 It is Holy Thursday of Santa Semana and my recipe for today incorporates the Oloroso into a dessert that is the perfect finale to any last supper.
The growing popularity of tapas in the last two decades has brought a revival in fino sherry, but Oloroso, its richer, darker, more highly fortified sibling, remains seriously underappreciated. That's a shame, because these can be magnificent wines and are far more accessible than most wine drinkers think.
Olorosos are rather dry wines when they come from the bodega (producer), but their rich, nutty tones can give them an almost deceptive sweetness on the palate. Dry Olorosos such as Gonzalez Byass Matusalem, Barbadillo´s Cuco (VORS) or Pedro Romero´s Viña El Alamo(VORS) are ideal as cool-season aperitifs and are a traditional accompaniment to soup courses. Spanish sportsmen drink dry Olorosos before hunting or fishing.


Oloroso pear with Pecorino Shortbread
Supermarket pears can be difficult customers, promising so much, but delivering so little.Hand picked pears on the other hand are difficult to ripen to perfect eating condition, so with a bit of cooking and aromatic addition to help them on their way, their fugitive flavour can be given a little more exposure.Cheese in cookies? It may sound a bit weird but why not. Pears and Pecorino are a perfect foil for each other so I decided on Pecorino shortbread as an accompaniment to this pear pudding, and the finishing touch had to be a glass of chilled Oloroso.

I suggest you use a fairly shallow tupperware container that you can put in the freezer beforehand – this speeds up the freezing process for the sorbet.


Put the pears, lemon juice, sugar and cinnamon in a pan with 125ml water, and cook over a low flame until the pears collapses ( 10 mins approx depending on how ripe the pears are).
remove from the heat, remove the cinnamon and when cool, blitz the pears in the processor.Add the sherry,give it a good stir and taste.The Oloroso shouldn’t be overbearing or too powerful – it should be subtle and should work well with the pears. However, different brands do vary in strength and flavour, so add to taste.One word of warning if you use too much alcohol the Sorbet won´t freeze. Transfer the purée to the tupperware container and put it into the freezer. Whisk it up with afork every half-hour. You will notice it becoming paler in colour as it freezes. After a couple of hours it should be ready. The texture should be nice and scoopable. Serve topped with mint leaves and a wedge of Pecorino shortbread on the side.

FOR THE PECORINO SHORTBREAD
Makes 12

Golden granulated sugar
Preheat oven to 350ºF/180º C , with the rack set in the center. Cream together butter, and sugar in a large bowl.  Add cheese, pepper and salt, and mix together until well blended, then add flour and mix until well combined.  Press the dough into an 8 inch tart pan with a removable bottom. Score the shortbread into 12 wedges, and prick each wedge a couple times with a fork if desired.   Sprinke the top of the shortbread with granulated sugar, and place in the freezer to chill for 15-30 minutes until cold. Remove from the freezer and bake for about 20 minutes until set and lightly brown. Go over the score marks again with the knife when removed from the oven. Cool in pan on a wire rack.
PS This sorbet will last in the freezer for a couple of days – after that it will crystallize.
Email Post