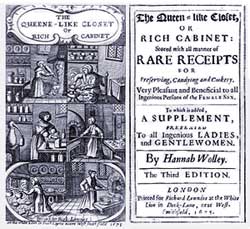 Last August, early in my blogging history I wrote a post about how recipe translations can be misleading.
I stumbled on this one while researching Easter and as a result felt it was time for a bit of light relief from egg recipes.
Portugal Eggs
Old Elizabethan Dessert Recipe
Take a very large dish with a broad brim, lay in itsome Naples Bisket in the form of a star, then put so much sack into the dish as you do think the biskets will drink up; then stick them full with thin little pieces of preserved Orange, and green citron pill, and strew store of French Comfits over them, of divers colours, then buttersome eggs, and lay them here and there on the biskets, then fill up the hollow places in the dish, with several coloured jellies, and round about the brim thereof lay Lawrel Leaves guilded with leaf-gold; lay them flaunting, and between the Leaves several coloured jellies.

The above old dessert recipe for Portugal Eggs is written in a totally different way to today´s recipe books! It is almost set out as a challenge, leaving it for the most part to the cook´s ingenuity.This is right up Heston Street.I wonder whether we might shortly be seeing this on his menu at `Dinner.´


A potted history of the Elizabethan recipe book
Email Post