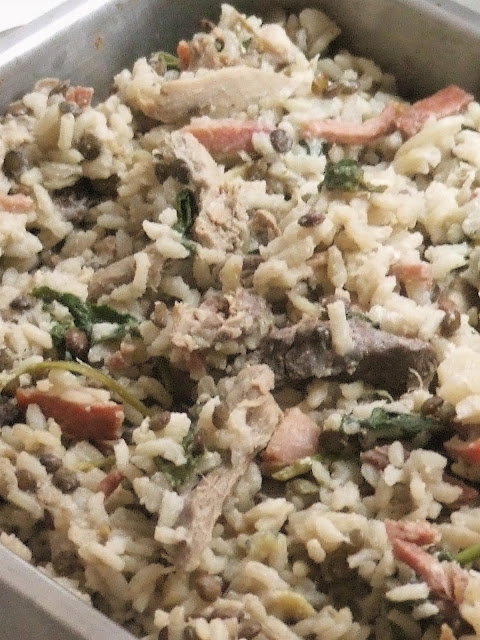 I must be quackers.Last week I decided that I was going to cook Arroz de pato ( Duck rice ) for an invited table that was made up of 70% Portuguese.This very traditional and tasty rice dish is quite common all over Portugal; it is very much enjoyed on those special occasions when all the family gets together for a special Sunday lunch, or any other celebration. But would I get the desired seal of approval from my guests for my take on a Portuguese classic?
I wanted to infuse different flavours into this ever popular Portuguese dish.In Portugal, it’s very much a peasant dish where you cook the whole duck with chorizo, rice, spices—a very simple, one-pot meal—but being an eternal exponent of culinary make over I decided to take it apart and employ a different cooking technique.- Risotto. The Portuguese have never adopted risotto as such, but they have many risotto- esque dishes that involve a rice.The closest Portuguese equivalent to risotto that I have found is Arroz de pato (Duck  rice) in which the duck is cooked in water and then the resulting stock is drained off to cook the rice. Halfway through the cooking, the rice is transferred to an ovenproof dish and with the addition of butter is finished in the oven. The pre-cooked duck is then shredded and added to the rice.The dish is then returned to the oven.A combination of traditional and oven cooked risotto.If cooked properly the result is delicious.. I made a Refogado.`Refogado´ is to the Portuguese what `Soffrito´ is to the Italians. Onions are fried together with olive oil, or some other fat, over a very low flame until they are soft and translucent - and this is the basic procedure for countless dishes.
The flavour  can be altered by adding different types of onion or herbs.In this case I used onion, garlic and parsley stalks.For my risotto I used equal parts carolino rice and puy lentils.I dissected several recipes for this dish, with my major influence coming  from Dona Ana Lidia At O Monte Velho.She tempers her food with spices like Star Anise not applied elsewhere by her Algarvian counterparts.Her rice was beautifully creamy like a risotto and without that nasty dried out crust that is so typical of the more traditional ristorante and tasca versions.
One of the most popular recipes for this “Arroz de Pato” is the one from “Braga”, which due to its particular and unique flavor has been reproduced all over the country. It is said that the people from “Minho” however, are the experts on making this rice and they even have a particular clay bowl from a region called “Barcelos” to make it. Nevertheless, don´t refrain from making it just because you don´t have that special bowl. Any kind of dish that can go from the oven to the table is all you need.

Place the duck in a roomy pot and add the stock,madeira herbs and spices. If the liquid does not cover the duck completely add a little water. Season with salt and pepper. Cook until just tender 1-1.5 hours.Take care not to overcook the duck. Meanwhile sauté the cured meats and set aside.Wilt the drained spinach in a pan and set aside.
Drain the meat and allow the stock to cool completely. When cool skim off the excess fat with a spoon and discard.Shred the duck meat and set aside.
Heat the butter and olive oil in a large shallow pan.gently fry the the shallots,garlic and parsley stalks until the shallots are softened but not browned.Stir in the rice and toss to coat completely. Gradually add the stock to the rice (21/2 times its volume) in stages.when half cooked (12-15 minutes) Stir in the reserved duck, presunto, chouriço and bacon.Add 2 tablespoons butter.Transfer to an ovenproof pan and finish cooking in the oven.
Remove from the oven and stir in the spinach and yoghurt with a wooden spoon.transfer to a large dish and  put in the middle of the table for people to help themselves.

And the Portuguese panel´s verdict - Thumbs up to chef!!!
Email Post