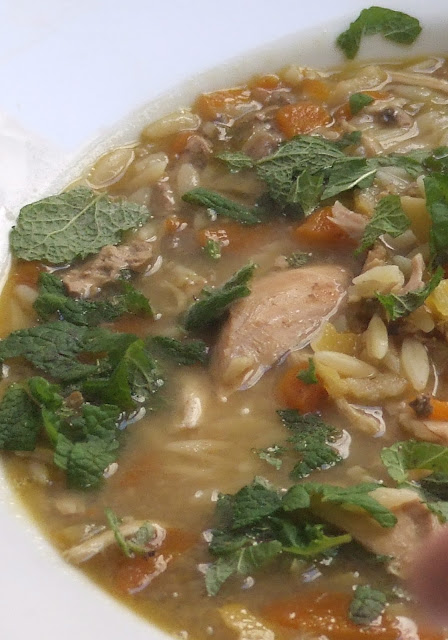 Still suspicious, he (Jacinto) tried the fragrant chicken broth and looked up at me.... His eyes shone in surprise.Another spoonful,and still another,fuller,more consistent.And he smiled,astonished:`It´s  good!´And it was:divine.It had liver and gizzard.It´s aroma was endearing. And thrice,with great fervour, I attacked that broth.Ì´ll have some more as well,´Jacinto exclaimed, thoroughly convinced.`I am so hungry!´he said.`God! I haven´t felt this hungry for years!´....The rich aroma from the soup in the tureen was simply mouth-watering.On a large platter, a succulent chicken covered with moist rice and garnished with sausages had the magnificence of a meal fit for the lord of the manor.
Eça de Queiroz,The city and the Mountains, (A cidade e as serras)
I can not write about Canja de galinha ( chicken soup spiked with lemon juice and garnished with mint) without a mention of Eça de Queiroz the great Nineteenth century Portuguese novelist and gourmand.Some of the country´s most favourite and famous dishes are enjoyed by his characters.The Canja that Queiroz wrote about had "nary a whisper of lemons or hint of mint".That said, I have to admit my version goes one step further.Having tasted traditional Portuguese Canjas I have added fresh ginger,lemon grass and nutmeg, token gestures to the origin of the soup,which stems from China where it is called congee.Like Thailand´s most popular soup Tom Yam, in its original incarnation, Canja was a hot medicinal broth,containing potent herbs and spices to which the Portuguese later added chicken. In medieval Portugal the use of oriental spices was prevalent in a great number of recipes.Such spices were beyond the means of the man in the street.However in modern Portuguese cooking ginger is a popular and easily affordable ingredient. I couldn´t resist but meddle, and love the heat that the ginger brings to this soup.Apart from Caldo verde, Canja is probably the best-known Portuguese soup,hence its mention in classic literature.It is part of popular tradition and is a recommended food for invalids.As far back as the fifteenth and sixteenth centuries, Canja was prescribed to sufferers of consumption.The medieval cookery booklets of  Princess Maria Manuela are Portugal´s equivalent of England´s Mrs Beeton.Apart from providing recipes they also contained some remarkable home hints which are still applicable today. Canja de Galinha is just one example.Tradition demands that this soup should be made with rice,but I can´t see why there is any reason to stop Canja being made with noodles.I took the middle road and opted for Risone( pasta rice ).

1 onion, sliced
2 garlic cloves crushed
2 celery stalks, chopped
1 small carrot thinly sliced
12 black peppercorns
1 teaspoon nutmeg
thumb sized piece of fresh ginger thinly sliced
2 stalks lemon grass finely chopped
2 bay leaves
Juice of 1/2 lemon plus zest of
2/3  cup risone pasta rice or small noodles
Flor de sal
small bunch of mint leaves, sliced thinly
Cook the chicken in the stock,and the first 9 ingredients, simmer  for 40 minutes-1 hour. Remove from the heat and then leave to cool in the stock.When cool remove the chicken from the stock and shred it into bite sized pieces. Juice the lemon and remove the zest in one piece.Add the zest to the remaining stock with the pasta rice and boil over a high heat,covered until the rice is cooked (10 minutes).When the rice is cooked remove the zest and add the reserved chicken.return to asimmer until warmed through.Pour in the lemon juice and stir to mix.Adjust the seasoning and serve in bowls.Scatter the mint leaves over each bowl.Feel the restorative goodness.
Email Post