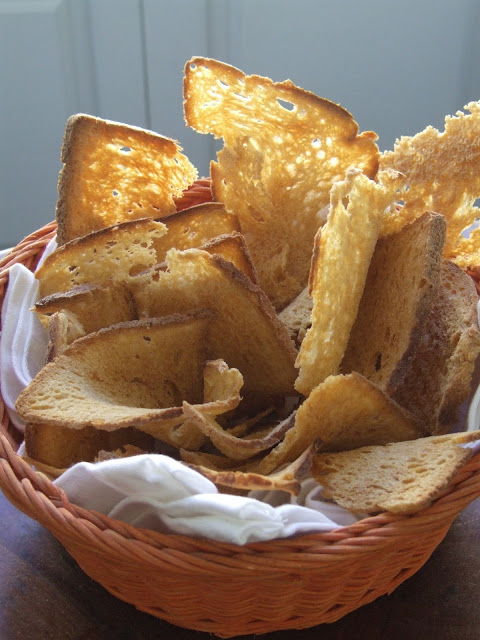 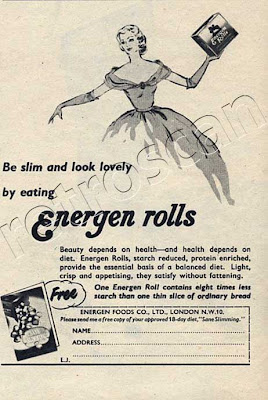 Energen Rolls were rough,ping pong ball -size, crunchy, dry, dough type things! I remember them from my mothers picnics with triangular Dairylea cheese spread on them. I loved them to pieces!-the dairylea not the Energen rolls. This was the late fifties early sixties.They were supposed to be (and maybe were) a low calorie bread. To me they always seemed to be sorely lacking in substance. Perhaps that was the point,they were claimed to help with 'slimming' and were intended to be eaten in place of bread. They were roughly spherical, if I remember correctly, and 'slimmers' cut them in half and spread each half with butter - or more likely, a 'low-calorie' butter substitute 'low-fat' spread - and with other fillings such as what would normally go into a sandwich.So that was your diet out of the window in one small flick of the knife.And again, if I remember correctly, they were made of cellulose! - more akin to wood than to what we think of as food! But they had been processed to be light and airy and easy to eat. - Energen Rolls were not really food for people, even if the people were 'slimmers'. Not being termites, people could not digest cellulose and so could not obtain calories or indeed any nutrition from these early junk foods.But what is crunchy and long forgotten, fantastic with pates,terrines and dips? Retro Melba toast.It is a dry, crisp and thinly sliced toast. Melba Toast is what you do with that leftover loaf. Store it in an airtight container and you'll have something ready to nibble on when the occasion arises.Surprise surprise, it is named after Dame Nellie Melba, the stage name of Australian opera singer Helen Porter Mitchell.There is nothing nelly about it, in fact there is something quite snazzy about it. In 1897 the celebrated chef Auguste Escoffier created the toast along with the peach melba dessert for Dame Nellie when she was supposedly taken ill while staying at the Savoy hotel in London. Thereafter Melba toast became a staple of her diet.Homemade Melba toast has the edge on the bought packaged variety. It is nicest served while still a little warm, in a basket or on a napkin-lined plate. If it is made a short time ahead, store it in an airtight container, then refresh it for a short time in the oven.Its wonderfully retro, far tastier than Energen rolls and half the price,and a whole lot better for you. 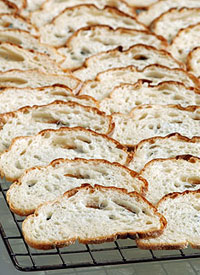 With a very sharp straight edged knife remove crusts from the bread (multiple slices at a time). Slice the bread in very thin slices (1/8") and then if you prefer cut the slices into triangles: I personally prefer the toasts served in more random shapes particularly when they start to curl up.Put the slices on an oven rack and bake in slow oven (180C) until light brown and crisp, about 1 hour. Serve hot or cold.